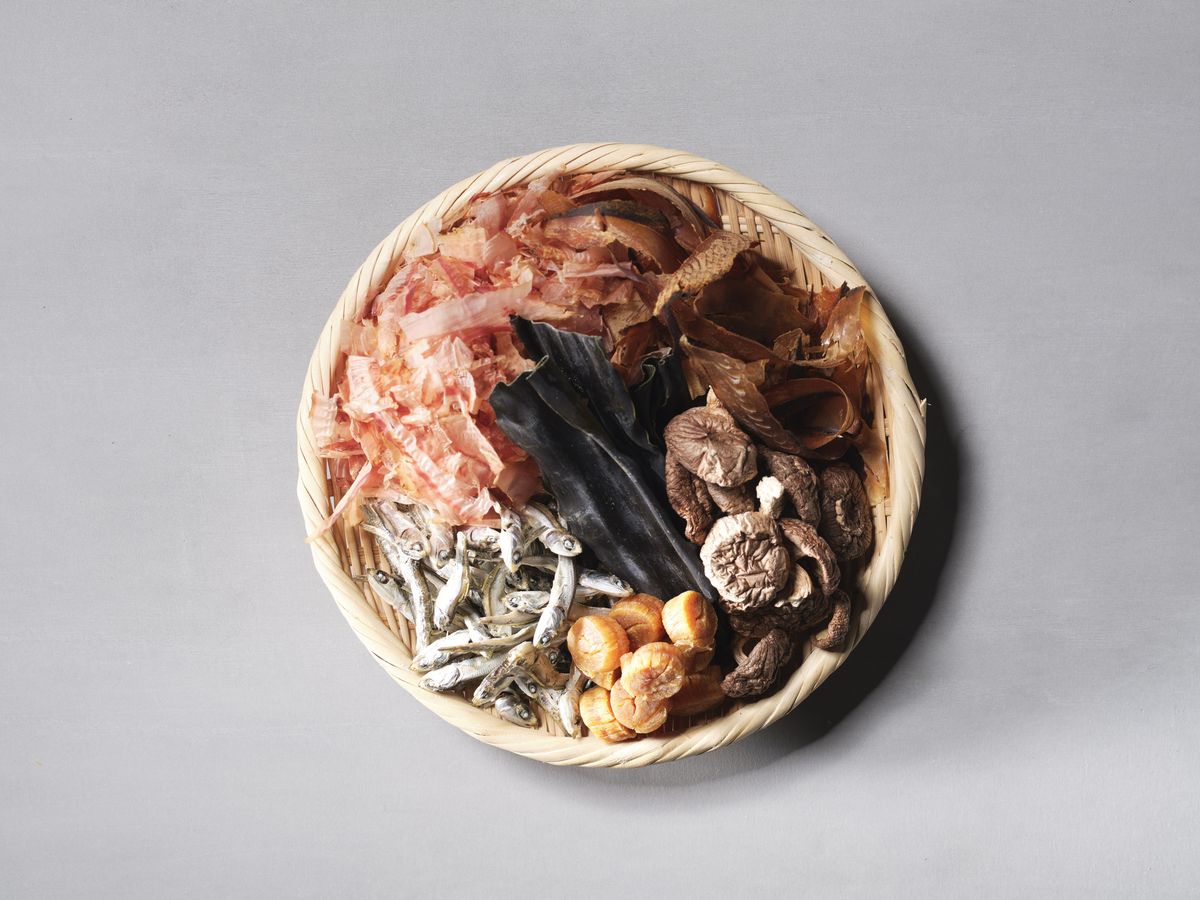 Chef Kevin Tien started cooking professionally 15-odd years ago, around the time umami, the pleasantly savory fifth taste, catapulted into the national conversation after scientists identified umami taste receptors on the human tongue. If you’d asked Tien to describe what it tasted like back then, he would have probably replied, “like comfort.”

As a Vietnamese kid growing up in Louisiana, Tien’s umami took such savory, nostalgic forms as bun bo hue (spicy beef and pork noodle soup) and bo kho (slow braised beef stew with warm spices and lemongrass), and that of Southeast Asian home cooking brimming with fresh mushrooms and tomatoes, and seasoned with fish sauce and MSG.

“Now that I’m a chef that has a touch more experience, I don’t think my comfort or nostalgia can necessarily translate to everybody,” muses the executive chef of modern Vietnamese restaurant Moon Rabbit in Washington, DC. Yet even as his taste vocabulary has expanded, he still finds umami hard to describe. “It’s not salty, but it can be salty. It’s not sweet, but it can be,” he says. “It’s a little of everything, like the Roy G. Biv of flavor. Umami is the full spectrum.”

“It’s like meatiness, the feeling you get when something feels really rich and savory,” says Zach Engel, executive chef and owner of Middle Eastern restaurant Galit in Chicago. “It’s not salty, but similar, and um, like, when you salivate a little bit. I’d try to describe it in the experience I have when I try it—sometimes it feels a little mushroomy, sometimes a little cheesy.”

Meaty, savory, rich, salty, even charred are words people use to describe umami.

Communicating a sensory experience to someone who doesn’t know what you’re talking about is hard. How would you describe the color red to someone who’s colorblind? How might you explain the aroma of onions sautéing in butter to someone who’s never smelled it?

Meaty, savory, rich, salty, even charred are words people use to describe umami. If you dab a bit of MSG—as in, the isolated amino acid glutamate attached to sodium—on your tongue, it tastes a little like dried meat. Yet plenty of Americans, including chefs, struggle to decipher or find words to describe it, even though umami is present in everything from Doritos and ramen to tomatoes, and is as old as fermentation and cooking.

“I think people have had a language around umami for a very long time, but it’s more identified with product use than with describing qualities of taste,” says Paul Breslin, professor of nutritional sciences at Rutgers University and faculty member at Monell Chemical Sense Center. “The idea of manipulating this taste in food is really old.”

He’s talking about the usual suspects that have long made us humans go “Mmmm!” On the Asian continent: kimchi, fish sauce, soy sauce and kombu, which a Japanese chemist named Kikunae Ikeda reduced from broth to a crystalline powder in 1909, discovering glutamate (and giving us MSG). In Europe: live-culture cheeses; charcuterie; brown pan sauces built on deglazing caramelized meaty bits left in the pan; and pizza, the oh-so-umami combo of cooked tomatoes, cheese and fermented sourdough crust. Centuries before all of these came garum, the fermented fish sauce Breslin describes as savory, sour, and a little fishy, which was found on the kitchen table of every household during the Roman empire.

“Most of the things we eat that are very savory are typically high in MSG and free ribonucleotides, which come from destroying proteins, which happens when we ferment and cook,” Breslin says. “The savory taste makes this—I can’t say it’s special just for humans, because other creatures enjoy fermentation, but we’re the only species that cooks. Homosapiens came about with fire; it shaped our evolution.”

Americans have had our share of umami, too. But owing largely to the age of convenience and industrialized food, many of us lost our connection to real fermentation, as shelf-stable pickles and kraut replaced barrels of the live-cultured versions; and we banned imported live-culture cheeses. Being that one of the main drivers of umami wasn’t ingrained in our collective identity or culture, we perhaps didn’t notice what we’d lost, Breslin says, adding: “For instance, try taking kimchi away from Koreans.”

Perhaps the most significant setback in our relationship to umami occurred in 1968, when a Maryland doctor wrote a letter to the New England Journal of Medicine, in which he described experiencing symptoms similar to an allergic reaction every time he ate food from a Chinese restaurant—pointing to MSG as the likely culprit. The subsequent demonization of MSG went on for decades, largely based on claims that the U.S. Food & Drug Administration couldn’t corroborate; as of 2019, over 40 percent of Americans still believed MSG was bad for them.

“It is very much about the false narrative of ‘Chinese Restaurant Syndrome’,” says Engel. “It is so culturally ingrained in people that they’ve blocked out the idea of it, which means that there are a couple of generations of Americans who, if they weren’t eating MSG at home because their parents cooked with it, they have truly no understanding of what umami is. So now, if they experience it, they might not be able to pinpoint what it is.”

There are other things going on here, too. Breslin points out that umami crudely falls into the appetitive taste category—meaning it’s something we crave more of—but not to the same level of intensity as, say, sweet or salty things, which can appeal all by themselves. Much as we like an edge of bitterness to our coffee, umami in small doses enriches nearly everything it touches; simply conjure the impact of a dusting of Parmesan on your pasta. However, if someone handed you a tall glass of MSG water, you probably wouldn’t gulp it down with relish.

Umami also isn’t capable of reaching the level of perceptive intensity of the other four tastes. “It reaches a maximum height that is lower than the others, so it’s less noticeable,” Breslin says, comparing its subtlety to tasting, say, starch or calcium.

Engel admits that until he started consciously deciphering umami in his dishes about a year ago, he’d been leaving flavor on the table. Now it’s a key factor in finding the perfect balance of flavors to take a dish over the top—like saltiness, acidity, sweetness and bitterness.

“A lot of my food is very bold; there’s not a lot of subtlety,” he says. “The subtlety is in that I have things balanced flavor-wise and texturally, and umami brings another element of balance into cooking.”

Simply being aware of the umami naturally present in braised lamb compelled him to amp it up by adding kombu, rehydrated dried mushrooms or MSG to the stock he cooks it in. Likewise, he sous vides glutamate-rich asparagus in the juice made from its stems, seasoned with salt, MSG and acid. “It tastes like asparagus like you’ve never had before—a clean, bold expression bolstered by its own umami.”

He talks about umami a lot with Galit’s cooks, with the goal of stripping away the misinformation and driving home that the same glutamate present in MSG is that found in whole foods like Parmesan and tomatoes.

“I always bring it up to people so they can pinpoint that we’ve focused on umami by using MSG or in another way so they get accustomed to it,” he says. “But it’s one of those things where you have to really spend a lot of time being exposed to it. So much of Western cooking and culture does not revolve around the idea of umami. We’re very not trained to consider it when we’re eating it and cooking. I think it’s going to be a long process.”

Tien uses MSG to amplify flavor in sauces and broths at Moon Rabbit, though “we actually label it ‘make shit gucci’ and ‘make shit good,’” he quips. Moon Rabbit also deploys liquid koji—aka an umami explosion—in a lot of marinades. He uses both umami boosters while training front and back of house staff.

“We’ll first make a dish without kogi and everyone on staff will try it and say, yeah this is pretty good. Then I’m like, OK watch this, and I add liquid kogi or MSG, and everyone’s just, like, wow.”

Tien watches as his employees connect the dots between what they’re experiencing in their mouths and what their brains tell them as they mull it over. What is that? Savoriness? Meatiness? Nostalgia?

Often words fail, as they’re wont to do with umami, and they find themselves back at that old, universal standby: “Mmmmm!”

How would you describe the taste of umami? Tell us below!

Why Instant Pudding Is My Secret Weapon for Summer Desserts