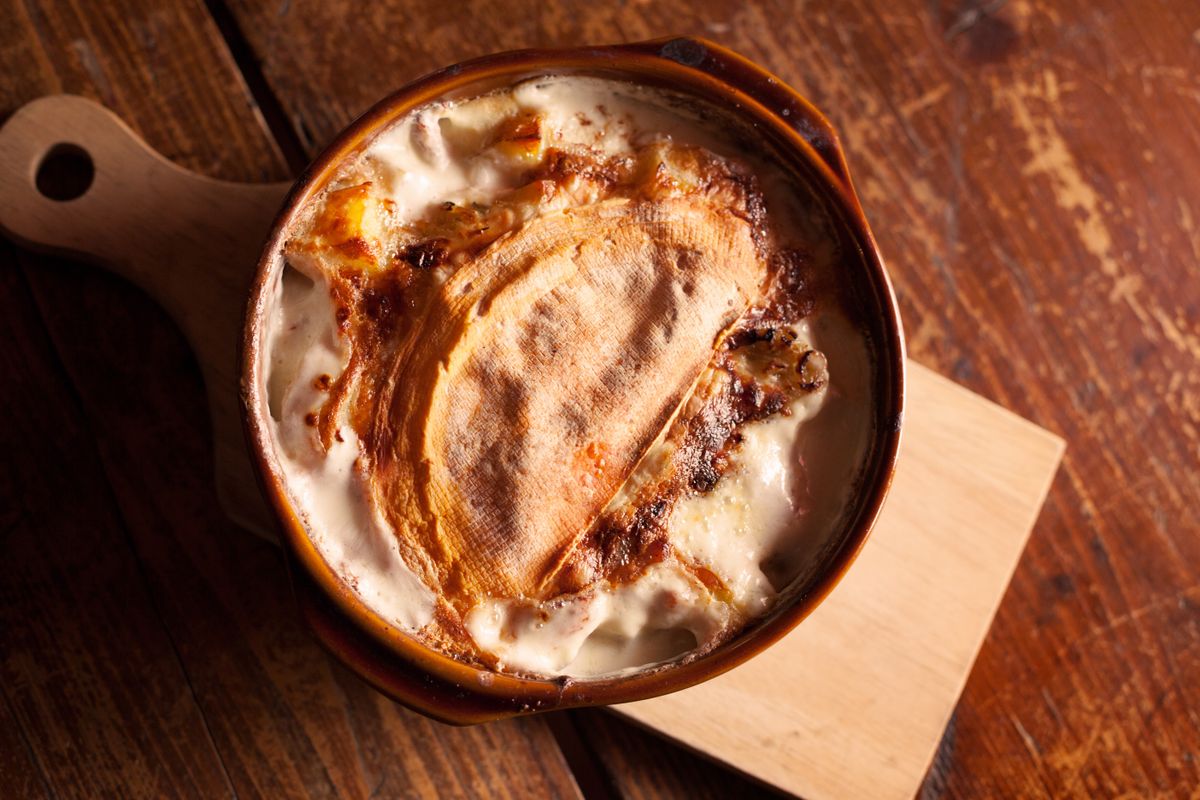 Every year without fail, when the first cold, rainy evenings begin to take hold, so, too, does a chorus among the French:

The simple, warming casserole hails from Savoie, a region nestled in the French Alps east of Lyon and west of Milan. Tartiflette is everything you’d want from a traditional, country-style winter dish: potatoes, onions, and bacon topped with nutty, funky Reblochon. The semi-soft cheese is the star of the dish, boasting the ideal marriage of the nutty flavors common to many Alpine cheeses and a whisper of the washed-rind funk familiar to fans of Epoisses. (Sadly, because it’s a raw-milk cheese aged for less than 60 days, true Reblochon isn’t imported stateside, but many Americans love to swap in similar washed-rind cheeses like pasteurized Le Délice du Jura, Préféré de Nos Montagnes, or even raclette.)

Belying its old-timey name, which is derived from local patois for “potato,” tartiflette has a relatively modern history, dating to the 1980s. Some say, in fact, that its invention was purely a marketing coup.

French food critic and co-founder of the Gault Millau guide Christian Millau claims in his Dictionnaire amoureux de la gastronomie (Dictionary for Lovers of Gastronomy, a collection of essays on French terroir) that we have the Syndicat Interprofessionnel du Reblochon—the Reblochon Interprofessional Trade Guild—to thank for tartiflette. The book states that the Guild invented the dish in the ‘80s as a means of boosting cheese sales.

Not everyone agrees. Lucile Marton, Director of the Guild, refutes the story, telling Slate that the guild didn’t invent the recipe, “even if we can’t deny that we’ve benefited from it.”

The truth probably sits somewhere in the middle.

Tartiflette was indeed likely concocted in the ‘80s as a way to market an overproduction of the Reblochon central to the dish. But Reblochon itself has a long history that starts on the border between modern France and Switzerland.

Reblochon has been made in the Alps since the 13th century, when it was invented as a way of skirting a local tax that local landlords levied on farmers according to the volume of milk they produced.

Farmers cunningly decided to under-milk their cows the day of landlords’ visits, reducing their owed tax significantly. Upon the landlords’ departure, they would milk their cows a second time, and with this richer, creamier milk, they made a cheese whose name stems from the local patois “reblocher,” meaning “to milk again.”

Reblochon was little-known outside the formerly independent region until France annexed it in 1860. The cheese’s popularity soon boomed nationwide. At several different points throughout history, however, farmers became a bit overzealous, producing Reblochon reserves that they ultimately had to destroy.

Which brings us back to tartiflette. In the ’80s, experts believe, an enterprising restaurateur at a ski resort in the Savoyard town of La Clusaz decided to take advantage of a surplus of cheese by combining it with bacon, potatoes, and onions. It was the ideal après-ski comfort food to warm up after a day on the slopes.

But he didn’t just pull the recipe out of the sky.

For centuries, locals in Savoie had been cooking up a hodgepodge of potatoes, cheese, and onions they dubbed “péla,” for the long-handled poêle or pan they made it in. While péla is made without bacon (and without peeling potatoes), one could assume that it was indeed the ancestor of tartiflette.

“You would traditionally add leftovers to [péla],” explains Anne-Lise Francoz, Communications Director of the Syndicat Interprofessionnel du Reblochon. Since Reblochon and péla are from the same area, she says, “we can assume without too much risk that Reblochon has always been the cheese used in it.”

These days, both péla and tartiflette boast as many variations as there are cooks who make them—and, of course, each cook thinks theirs is the most “authentic.”

“We all think we have the ‘real’ recipe,” says Frédéric Motte, owner of Pain Vin Fromages, a cheese-focused restaurant in the Marais district of Paris.

Motte’s version of the classic involves coating the baking dish with crème fraîche (a divisive addition that steadfast tartiflette fans eschew in favor of a purer cheese flavor). He then layers in potatoes and a mix of sautéed onions and smoked lardons. Last comes a full quarter-wheel of Reblochon, split through the center so its rind browns under the broiler. The creamy cheese drips down among the potatoes, so every bite is coated with its rich flavor.

Of course, given Reblochon’s central role in the dish, only the best will do for the discerning French palate. In France, producers make two different categories of Reblochon: One, with a green wax seal, uses the raw milk of one (or several) of only three permissible breeds of cow on the farm, as soon as the cows have been milked. The other, with a red seal, is made in a factory using milk from multiple farms.

The former, unsurprisingly, has far more character and flavor, and is preferred not just in tartiflette, but also on a cheese board.

And therein lies the rub: The dish that began as a method to use up a glut has subsumed Reblochon’s identity. These days, while Reblochon could easily star on a cheese board alongside popular French specialties like Camembert or Brillat-Savarin, it is often perceived as little more than a topping for tartiflette, a reality that many experts bemoan.

“It’s a cheese, not an ingredient,” says Francoz, noting that winter, which is prime tartiflette time, isn’t even necessarily when the cheese is at its best.

“Reblochon is made all year long, but it’s especially good when the cows are at altitude,” she says. As cows can only access these verdant pastures in summertime, that’s the best time to enjoy Reblochon—fresh, not baked.

Sandra Angelloz is another producer who disdains Reblochon’s “garnish” status. She makes green-label “Reblochon fermier” the traditional way: in the valley in winter and at altitude in the summer. Thanks to cows that graze for a full seven months out of the year, the cheese takes on a hazelnutty flavor and a shiny, creamy texture.

“Most French people think Reblochon equals tartiflette,” she says. “It’s a bit humiliating for small producers to know that our cheese ends up this way, seeing as at the beginning, it was just a cheese that was enjoyed simply.”

As for us, we’ll take Reblochon however we can get it. The very best wheels are delicious however you serve them: on their own, on a slice of good bread, or—yes—gratinéed atop a comforting tartiflette.

Have you tried tartiflette? Share your thoughts on the dish below!

How to Zhush Up Lobster Rolls, Summer's Favorite Sandwich

How to Make Apple Cake, As Seen on 'The Great British Bake Off'