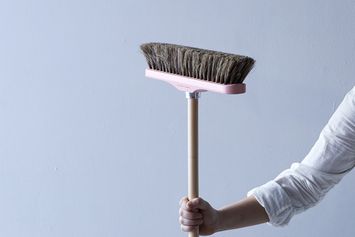 We’re less than halfway through Dry January, and if you’re participating (or perhaps giving “Damp January” a try), you may be wondering what to do with all the booze sitting in your liquor cabinet until the 31st. Tito’s Vodka has the answer—according to the brand, there’s a multitude of ways to use their vodka without actually drinking it, and they’ve recruited none other than lifestyle icon Martha Stewart to help spread the word.

The new Tito’s campaign, made in collaboration with Arts & Letters Creative Co., features the TV personality and entrepreneur using vodka to deodorize smelly shoes, make pasta sauce, clean grimy surfaces, and even extend the lifespan of a flower bouquet.

Is it possible that vodka is actually that versatile? Well, yes—just make sure to use the unflavored kind. With that in mind, here are a few of our favorite ways to use vodka (that don’t involve drinking it).

You simply can’t go wrong with a creamy, rich vodka sauce, and it’s easy to recreate the Italian-American specialty at home. Try a classic rendition, a smoky version made with ‘nduja, or a vegan one featuring cashew cream.

Similarly to vinegar, vodka can be used as a surface cleaner—it also happens to evaporate faster and doesn’t leave a residual odor in its wake. Just remember that vodka is not strong enough to use as a true disinfectant. Rather, it’s a great option for making your countertops, bathroom tiles, and other household surfaces shine.

How to Clean (Almost) Your Whole House With Vodka

Whether it’s caused by sweat or campfire smoke, vodka can be used to obliterate unpleasant odors in clothing. Simply spritz the offending garment with vodka and wait for the liquid to evaporate—the smell should disappear along with it. This trick also works for mattresses, carpets, and any other fabric-based items that could use a freshening up. To combat smells caused by mildew, meanwhile, add about a third of a cup of vodka straight into your laundry prior to running the cycle.

What’s your favorite unconventional use for vodka (or any other spirit)? Let us know in the comments!

6 Best Personal Blenders for a Party of One

5 Ways to Pair Hard Cider & Cheese, According to Marissa Mullen