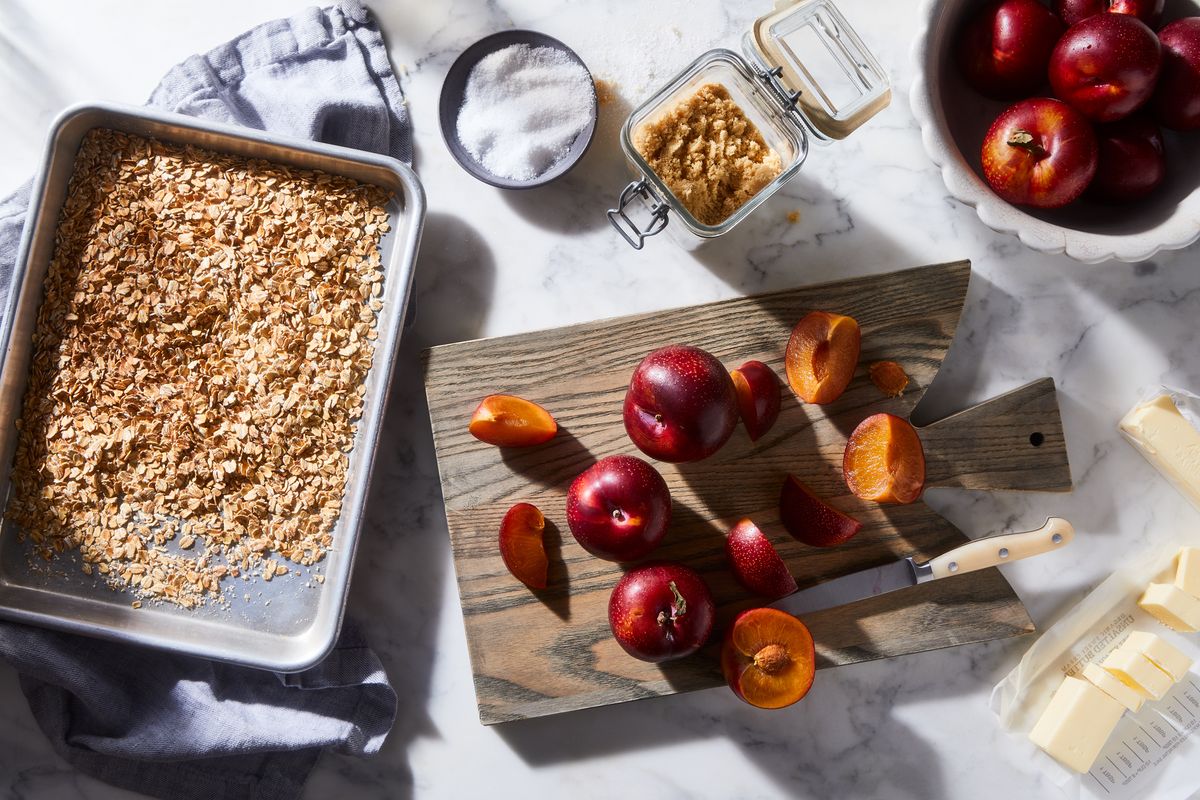 It’s hard to feel or believe in summer’s impending arrival, though the signs around me suggest otherwise. Longer days. Slowly, more green (last week, sorrel; this week, pea shoots) in my CSA box. Seeds that are no longer seedlings but now full-fledged plants. What’s helping me play catchup with my surroundings? Nigel Slater’s Ripe, which was published in 2012.

Almost a decade-old, Slater’s tome on all things fruit is armchair travel that, itself, doesn’t leave the home garden. With Slater’s help, I’ve assembled a guide for choosing and using some of summer’s juiciest, heartbreakingly sweet treasures. You’ll learn about how to pick, store, and bake with summer fruits like berries (strawberries, blueberries, raspberries, and blackberries), stone fruit (like apricots, peaches, plums, and nectarines), and late-summer arrivals like apples. May you collect one, or all (!), and eat them over the sink, turn them into a pie or buckle, or serve them as a side dish for an epic grilling feast.

…heady scent of strawberries caught in the heavy air of the great Pavilion. tantalizing—you cannot touch them, let alone taste them—but you can still breathe in their sugary richness. —Nigel Slater, Ripe

Strawberry season can begin as early as May, peaking in mid- to late-June. Allstars, aptly named, are the picture-perfect glossy ones that show up around mid-June. Alpine strawberries are smaller-fruited and so, more intensely flavored, and their season persists through October. Slice and dice the plumper varietes into salads, scones, or onto pavlova; coax them with a little heat and sugar into compote or jam.

A fine apricot will have a cluster of dots, freckles of ruby, rust, and chocolate, around its shoulders. It may have a dime-sized patch of rough skin. Within its velvet skin, it will glow a deep, intense orange, as if lit by a candle flame. —Nigel Slater, Ripe

Apricot season typically spans early May to July (extending through August in Washington). Slater’s description—“you will be able to tease the two halves apart with a single pull, at which point it will almost certainly lose a bead or two of juice. The flesh will be soft and sumptuous”—is completely unlike any apricot I’ve come across, but I’m holding out hope. Strange as it may sound, I’ll be sniffing (scent is more telling of quality than color, for apricots) out the remarkably flavorful Blenheim and Gold Kist varieties; the former to be eaten out of hand (or chopped and folded into a rice salad), the latter for jams or drying. If you do make a jam, leave the pits (noyaux) in—they will perfume your preserves with, astonishingly, almond flavor.

On a sunny day in late July they hang translucent on the tree, as if lit by a candle. their flesh becomes soft and melting and the juice honey-sweet, a sticky golden nectar. if i could have just one tree it would be a plum. —Nigel Slater, Ripe

A close relative of the apricot, cherry, peach, nectarine, and almond (!), plum’s season runs as early as May and extends through October in some regions. Golden-red Santa Rosa and Elephant Heart (named so for its heart shape) are especially fragrant varieties (so, good out of hand, but also in a jam); dusky purple French and Italian Prunes are not super juicy nor flavorful, and benefit from stewing or braising. Perhaps deceptively so, vibrant green-golden Damson, Mirabelle, and Greengage plums are not tart, and typically even sweeter than their rosy-hued counterparts.

The berry you pick from a country lane invariably has the truest flavor, sweet but sharp, winelike and heavy with the warm glow of nostalgia and berry-gathering trips past. —Nigel Slater, Ripe

Supermarket berries are reliably sweet year-round (so make reliable partners to yogurt, oatmeal, cereal), but just that. In breeding for larger-bodied, sweeter fruit, much of berries’ natural perfume—hints of which can be tasted at the height of July, or better yet in those that are wild-picked—gets lost.

Powder-blue Berkeley and Bluecrop varieties have a subtle perfume and are slightly more petite than Big Ag’s darling Highbush. Large-fruited Sylvan and Shawnee are the two most common blackberry varieties; the former—a close relative of marionberries—is seductively jammy, the latter noticeably glossy, though quick to go soft.

Amity and Willamette are just two of the most common red raspberry varieties. Seek out golden (Amber, Fallgold) and black (Black Hawk, Bristol) raspberries—their taste is pretty much indistinguishable from red, but that color!

Fun fact: Loganberries are a cross between black- and raspberries; boysenberries of logan, black-, and raspberries. Double fun fact: blackberries are not berries, but aggregate drupes (single-seeded fruits like peaches, plums, and cherries). Regardless, they’re delicious and destined to be tossed with sugar, lemon zest, and a little bit of vanilla extract for cobblers and cheesecake.

When a peach is at its most sublime, it needs a plate to catch the juice, though I invariably forget. Or is it that I can never quite believe I will need one? Either way, it is usually followed by that embarrassing little noise that comes from the corner of your mouth as you try to catch the escaping trickle of juice. —Nigel Slater, Ripe

The season for peaches and nectarines (which are, turns out, the same fruit; the lack of fuzz due to a recessive gene) begins in mid- to late-July and extends through August. Of the pale, cream-fleshed varieties, Snow and Saturn are immensely fragrant; of yellow, Elberta and Red Haven emerge heaviest. I, like most others, think the only way to eat a peach is over the sink. Whether your preference is white or yellow, don’t stress too much over finding the perfect peach at the store (which will inevitably bruise on the way home): Pick one that is slightly underripe, and let it turn sweet and soft on your countertop. And if you end up with some peaches that are a little dented, bruised, or squished, chop them up for a peach crisp (which you were obviously going to bake anyway).

Sour cherries have an even shorter span than regular cherries—they’re only in season during June and July. Compared to sweet cherries, sour cherries are actually smaller and softer. Oh, and you definitely don’t want to eat them raw. They pack an incredibly tart bite, so they’re best enjoyed cooked down with a lot of sugar. Make a cobbler, frozen yogurt, or cheesecake using sour cherries and you’ll fall in love.

My heart gently skips when I find a pair joined at the stalk, like a kid who has just been handed an ice cream. —Nigel Slater, Ripe

Cherry season extends from early May to late August, being slightly shorter in the Northeast and longer in the West. Common cherry varieties fall within three categories: sour, white, and sweet red/black. Tomato-red Morello are decidedly tart, welcoming the addition of sugar and heat (think jam, scones, pickled). Rainiers—a handsome cross between Bing and Van cherries—have pale-yellow cheeks blushed rosy and heartrendingly crisp flesh. Wine-red, sweet-tart Lapin cherries are stellar as is, or sliced and folded into frilly lettuces with knobs of soft cheese.

No matter the variety, seek out cherries that are still glossy—their shine, along with their firmness, signifies freshness. For the crispest presentation, serve cherries on ice.

And so it is with melons. Beyond a slice of prosciutto, there is little anyone can do with a truly ripe melon that can make it a better thing. I will go along with a water ice and the odd razor-sharp salsa, but more than that and I can’t help asking – why? —Nigel Slater for The Guardian

Melon—watermelon, honeydew, and cantaloupe—season runs from late-May through August. There’s large and seeded, or mini (“personal”) and seedless, orange-, and green-fleshed. As for the mystery of picking a good one, here are some things to look and feel for: unblemished, shiny green skin for watermelon, golden-ish for honeydew and cantaloupe; heavy weight for its size; a deep, hollow resonance when tapped on its side. Like Slater, I’m of the camp that doesn’t think much can be done to better a ripe wedge of melon, served ice-cold. (But if you must: try cubes topped with slivers of mint, olive oil, flaky salt, or yes—cured pork.) Go beyond the refreshing snack with a watermelon and tomato salad or Honeydew With Prosciutto, Olives & Mint.

While we normally think of figs as a fall-winter fruit, they actually have a brief, early introduction during the first few weeks of June, which is known as the “breba” season. When choosing fresh figs, look for ones that are slightly soft to the touch and super smooth all over. Black Mission figs come first, followed by Brown Turkey and Kadota figs.

I prefer to rummage through wooden crates for my Pippins, happy to go home with bags of misshapen fruit of all sizes: plump ones for breakfast, majesties for baking, and a few the size of baubles for snacking on. Apples lack the seductive qualities of the peach and the mystery of the pomegranate, but they make up for it in no-nonsense appeal. —Nigel Slater, Ripe

With some variance by region, apple season falls between early August and November. Because of their persisting firmness, some (Granny Smith, Honeycrisp) are better suited for baked applications (pie, galette, tarte tatin). Others (Gravenstein, Mcintosh) more eager to crumble are better for sauces and purees. As for ones to eat out of hand, don’t be deterred by size or color—Jonagolds are large but flavorful; blushed Pink apples almost effervescent. Of course the majority of the varieties peak in September and October, but that won’t stop us from getting a little prematurely excited for what’s to come.

What’s your perfect way to eat a perfect summer fruit? Tell me about it in the comments.
This article contains products independently selected by our editors, and Food52 may earn an affiliate commission on qualifying purchases.
This article was updated in May 2022 by our editors because summer can’t come soon enough.

14 School Supplies That Parents Swear By

How Living in Spain Changed the Way I Spend Sundays