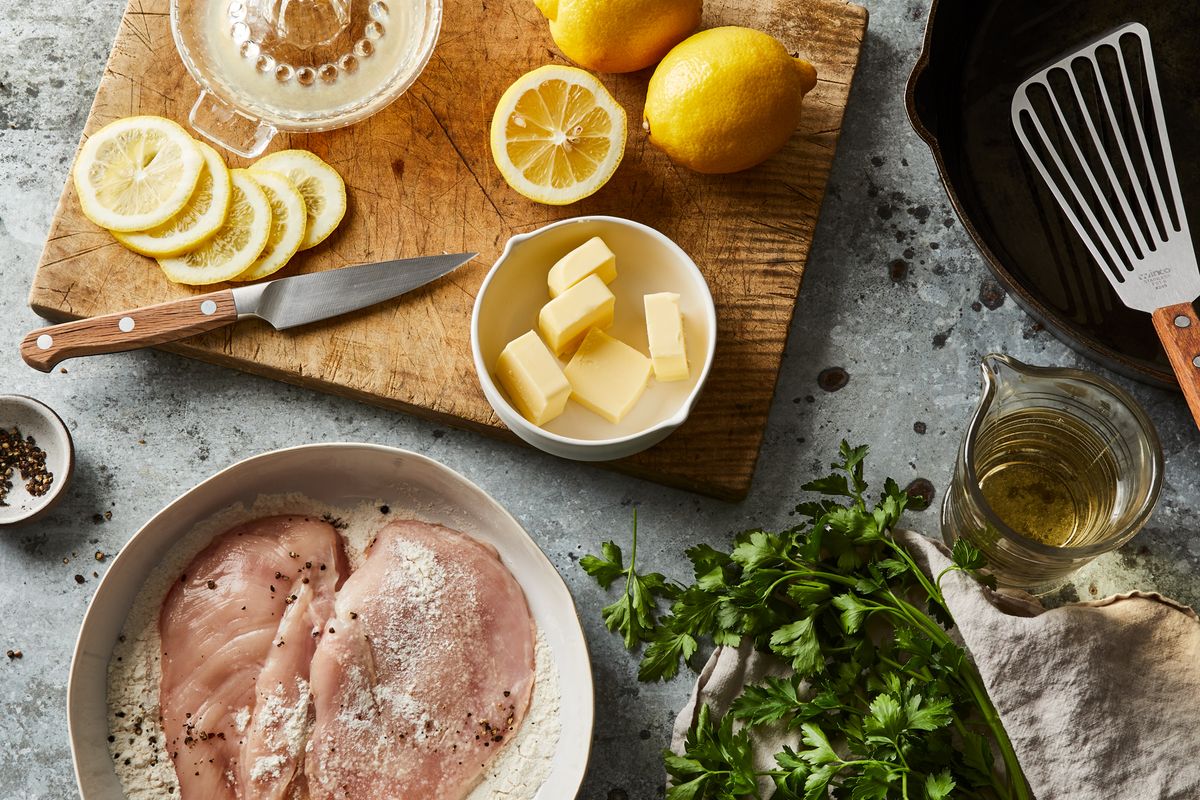 I felt sick the first time I ate unwashed chicken.

I watched my friend de-package the chicken breast. He rinsed one side for all of one second; placed the chicken, with its package juice-water still dripping, in a baking pan; sprinkled a few seasonings then popped the pan in the oven for the breast to bake. I knew people didn’t wash their chicken, or any meat for that matter, but witnessing it was an entirely grotesque experience.

Even though the USDA does not recommend washing raw poultry, beef, lamb, pork or fish because bacteria can spread to other foods, surfaces and utensils, I can’t bear not washing meat. In my family, washing meat is the start to well-prepared food and something my parents, sister, cousins, and so forth do. To us, it’s a ritual, a mandate. We care equally about cleaning, eating, and communing. Because of this, I don’t eat food from potlucks; I can’t vouch for who may or may not have cleaned the meat.

My process of washing meat starts with a running water rinse, then soaking in a large bowl of cold water plus lemon juice and/or vinegar for a few minutes to “wash” away the germs. I inherited washing meat from my Belizean-Nigerian family.

Cousin Bobbi, my family’s matriarch, recalled buying meat and fish at the only market on the river in Belize City approximately half a century ago. “Outside of extremely wealthy people, most bought their food, raw meat, fish, fruit, vegetables and seasonings, at the market. Beef was hung up and you told the person—he wasn’t a butcher; he could have been a farmer or a man there to just sell meat—what part you wanted, and he chopped it off and gave it to you.” At 83 years old, Cousin Bobbi’s memory is still sharp. She adds, “There weren’t mosquitoes or bugs flying around so that wasn’t a worry, but you saw someone handling your meat with their bare hands. That was more than enough reason to wash it at home.”

When she left Belize for the United States, she left the open market shopping behind; when she returned to her home country for subsequent visits, the market was replaced by modern grocery stores, all with pre-packaged meat. Yet, it never changed her stance on meat washing.

I never visited the market Cousin Bobbi referred to, but growing up, I always accompanied my mother to a live poultry shop for fresh-killed chicken. Feathers were everywhere, and I recall a Spanish-speaking man wearing a thick rubber apron and rubber boots splattered with water and flecks of blood. He used to jokingly ask me to show him which fowl to pick. I hid behind my mother’s hips and peeked out only when the chicken he grabbed from the cage started to squawk. The feathers floated to the ground and left a trail as the man disappeared in the back, the chicken’s neck firmly in his large hand. Shortly after, he always handed my mother a heavy brown paper bag which was placed in a white plastic bag. That was our dinner. When we got home, my mother washed all of the chicken by soaking it in a water, lemon, and vinegar mixture. Sometimes she let the neck sit a little longer since it was harder to wash.

My mother no longer frequents live poultry houses and local butcheries; neither do I. Instead, I purchase most poultry and meats from Trader Joe’s in vacuum-sealed packages labeled natural or organic, and yet, I still wash each piece.

Cousin Bobbi’s meat washing process varies slightly from mine. She washes her meat in designated bowls or aluminum pans by rubbing half or quartered lemons on each piece. Immediately after, she seasons the meat, then cleans her sink and countertops with the leftover lemons to avoid cross contamination. I refuse to sanitize with used lemons, preferring to clean my sink, surfaces, and utensils with apple cider vinegar followed by soap and water. Sometimes after washing the utensils, I still place them in the dishwasher and turn on the antibacterial setting. My process is more time consuming but personally more reassuring.

The only person I know of Caribbean descent who does not wash their meat is my acquaintance Tracy. “I don’t have time for that,” she once said. “My mother did that often but it’s an old and outdated practice.”

I have also never seen a chef wash meat as I sat at the chef’s table or in a restaurant that has an open view to the kitchen. And while culinary shows are edited for television, I have also not seen one piece of meat washed. Lastly, the handful of times I participated in culinary classes, no one ever suggested that the meat needed to be washed. So. I know restaurant chefs are unlikely to wash their meat, yet, Julius Jackson, a St. Thomas-based professional chef, author, boxer, and former Olympic competitor, does. “The United States Virgin Islands was a port for slavery. Food for [slaves] were leftovers kept in dirty buckets. [By nature], animals aren’t clean. Chicken feet, pork feet, and pork snout are especially unclean,” he said in a phone interview.

“I wash down meat when I cook at home and cater for others,” Jackson continued. In his cookbook, My Modern Caribbean Kitchen, Jackson doesn’t need to tell recipe-followers to wash their meat before seasoning; this pre-preparation stage is expected. Again, it’s cultural. “Everyone I saw in the kitchen, including my mother, cleaned their meat before seasoning. My mother used acid—warm water and lemons or vinegar—to wash meat. This was especially true for chicken.”

Growing up, the women in my family did most of the cooking. My Nigerian dad, who I’ve seldom seen cook, is big on things being clean and organized, so I asked him about his preparation practices. When he cooks, he washes every piece of meat three times with a lemon-water mixture and after, cleanses it again with just lemons, then adds seasonings. While my dad’s practice started with meat, he extended a similar process to almost all food; he washes produce and rice thrice in water as well.

Of course, not everyone agrees with the process of washing meat. Jamila Robinson, assistant managing editor for food, dining, and community through food at The Philadelphia Inquirer, is totally anti-washing since it can spread salmonella and e-coli everywhere. For fish, she rinses and pats it dry.

“Meat washing is such a curious thing to me. You would never wash ground round or sausage so why wash a chicken?” Robinson says. “I definitely think it’s cultural. It’s important not to castigate cultural practices around food but also raise awareness about food safety.”

When washing meat, there is always the possibility of cross-contamination and spreading bacteria. This is why cleaning sinks and surfaces is integral to decontamination. In addition to Cousin Bobbi’s quick clean method and my lengthy one, Chef Jackson offers a step-by-step approach for cleaning meat. “Use a really large bowl because it prevents splashing and try to avoid washing in your sink.” He recommends using a stainless-steel bowl because it holds bacteria less than plastic. When it’s time to clean surfaces, “Always have vinegar because it doesn’t go bad. It also cleans and sanitizes surfaces if you don’t have bleach,” he said. Alternately, if vinegar is unavailable, lemon or limes work just as well, Jackson indicated.

Remember my opening story about my friend dripping chicken juice? I always believed meat juice was the culprit for spreading bacteria; it was the reason for my disgust and not just a figment of my imagination. While meat washing as well as cleaning and sanitizing after varies by individuals, even within my family, there is one thing every who washes meat should have: bleach.

Benjamin Chapman, professor and food safety extension specialist in the Agricultural and Human Sciences Department at North Carolina State University stated, “Any time we’re doing meal preparation at home, it’s important to understand raw meat, poultry, fish and egg products can come into our kitchens contaminated. The challenge with raw meat and poultry is the water that purges out of the meat during storage or refrigeration. That liquid contains pathogens that can be easily spread from the packaging, the meat itself, hands, countertops, and utensils. Sometimes it contains pathogens, sometimes it doesn’t.” He added, “Washing meat does not reduce the risk; it increases the chance of pathogens.”

But, for people like myself, my family, Jackson, and countless others who accept this practice as a cultural norm, Chapman adds, “Bleach-based solutions are the safest for cleaning. We don’t have good data that proves vinegar kills what’s in your sink. It does [help], but lemons and vinegar don’t do enough. Look at the liquid like it’s a pathogen, limit where it may tread then do a good job of cleaning and sanitizing. Clean to remove the liquid then sanitize to take care of any bacteria that may be remaining that you can’t see.”

I started keeping a notebook with recipes for my son. While he’s too young to touch raw meat, I allow him to pour vinegar in the water for soaking. When he’s older, I’ll show him how to wash meat to maintain family and cultural traditions; it will also ensure I’ll dine at his home. Today, however, I will, update my family tradition by sanitizing with a bleach-based solution instead of vinegar because tradition can change a little.

The Best Blenders & Food Processors That Chefs Use Every Day

Dozens of Cheese Products Have Been Recalled, Due to a Listeria Outbreak