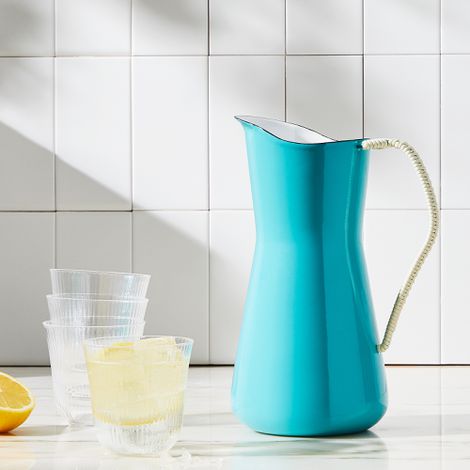 Back in March when Food52 released a one-off vintage Dansk drop, some of the most coveted items were the pitchers in cool teal, chili red, and even a rare kumquat. There were only five total, which means they sold out in a snap. But there’s good news for all those of you that didn’t get your hands on one. An archival reissue of the iconic pitcher is now available—and there are plenty to go around!

The Købenstyle pitcher, which was first unveiled in 1955, is often one of the first vintage Dansk pieces people reach for and get excited about because it is so iconically Dansk. “It’s still sought-after in vintage shops and online, from eBay to 1stDibs, and when the Los Angeles County Museum of Art announced its upcoming show, Scandinavian Design and the United States, the Købenstyle pitcher was front and center,” says Christine Muhlke, Food52’s Dansk archivist.

Much of the pitcher’s enduring popularity is thanks to its sturdy but elegant design: the brightly colored enameled steel a counterpoint to the delicate hand-wrapped rattan handle. Its clean, quietly sculptural lines are, of course, a Jens Quistgaard trademark. The Danish mastermind behind Købsenstyle cookware and the Dansk brand was trained in sculptural art, and always carried that mindset into the world of product design. Quistgaard’s daughter Henriette writes via email, “My father developed his own personal language of form. Objects had to be conceived in three dimensions, much like sculptures, and were underlined by a distinctly personal touch. In other words, while Købenstyle was designed for industrial production, it always bore the mark of the human hand.”

Another thing that’s distinctive about Købenstyle products is that they are designed to go straight from kitchen to table (like the casseroles and paella pans), and are often multifaceted (like the very popular butter warmer). Even the pitcher finds several uses other than just to hold drinks (incidentally, it is designed to hold hot and cold drinks). Elizabeth Spiridakis Olson, VP, Creative at Food52 and a lifelong collector of Købenstyle, says she plans to use hers as a vase. “I have my eye on a red one, and will be using it for flowers in my kitchen all summer long. The pitcher is tall and has a nice weight to it, so it’s ideal for beautiful, bold arrangements.”

Food52 stylist Molly Fitzsimons has the same idea: “The pitcher is perfectly proportioned for flower arranging: tall and slim, slightly cinched toward the top, then slightly flared to make room for the blossoms of your choice, whether a loose bunch of wildflowers or a single shapely branch. You can choose a color to either complement or contrast with your favorite flower—but I have yet to find a combination that doesn’t work.”

Of course, the special signature of Købenstyle is the use of those crisp, saturated colors. Originally, there were only four: turquoise, yellow, orange-red and dark blue, but over the years, the brand expanded that slate of shades. Muhlke bought a teal pitcher at an antiques store in West Virginia almost 15 years ago, and admitted to buying a couple more while curating the Dansk vintage sale. “Now I’ve got my eye on the straight-sided Købenstyle pitcher,” she says.

The original pitcher, which Henriette says is still missing from her own collection, and its variations, like the straight-sided version with the more traditional welded handles, will always find lasting appeal among fans of the brand. Muhlke speaks of visiting Quistgaard’s house in rural Denmark—where Henriette still lives today—and coming across the original drawings for the pitcher. “It was incredible to be so close to the source,” she says. “We felt like we were in the presence of Picasso’s sketches!”

Do you own a Dansk pitcher? Tell us the story of how you got yours in the comments below!

A Make-Ahead Menu for a Laid-Back Dinner Party

The Best Sparkling Water Brands (Trust Us, We Tried Them All)