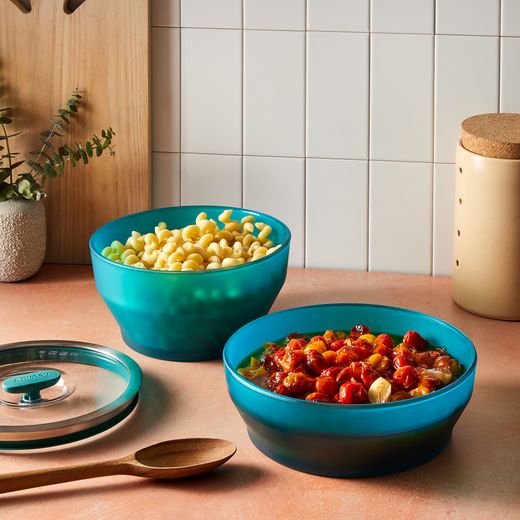 I’m not a huge microwave person. This can be attributed, at least in part, to the fact that my microwave is really, really bad. It’s a tiny, cheap, and relatively low-power model, manufactured by a certain e-retail giant and taken from my sister’s college dorm room. Before that, I simply did without the (admittedly handy) appliance, reheating soups and stews on the stove, or just eating my leftovers cold from the fridge. Microwaves are notorious for their shortcomings—uneven cooking, variable cooking times across models, and lack of browning abilities, to name a few—but I wondered if there was a way to get more out of this much-maligned appliance.

Was there anything, anything at all, that could make me love my microwave? I tried Anyday’s line of microwave cookware to see if it could help me expand my relationship with the everyday appliance beyond just reheating leftovers. Could the microwave be a cooking tool in and of itself?

Believe me—I was skeptical But after using my microwave to make three very different dishes, I was pleasantly surprised by the results. Were these meals perfect? No. But in a pinch, on days where I don’t feel like making (or cleaning) a huge mess, I can definitely envision myself turning to Anyday’s cookware collection again.

I tested Anyday’s Complete Set, which comes with six dishes in varying sizes and depths. Each one has an airtight lid, the top handle of which doubles as a steam vent when pulled. I was struck by how sturdy and well-made these glass containers felt—far more substantial than your average reusable, plastic container.

Because microwave cooking is a somewhat new phenomenon, Anyday features ample resources, in the form of recipes, articles, and guides, on its site to make the process less daunting. Each recipe, moreover, can be customized according to the desired serving size and the wattage of your microwave—due to my (aforementioned) very low-powered microwave, I found this feature to be particularly helpful.

This recipe from Anyday’s site features rice noodles in a fragrant, creamy coconut-based broth. There’s an impressive amount of flavor in this dish, thanks to aromatics like garlic, ginger, onion, and fish sauce, plus lots of turmeric and freshly ground black pepper. It also helped that the entire dish, including the noodles, came together in a single Anyday container.

However, the noodles took much longer to cook than the four to five minutes recommended for one to two servings and my microwave wattage (700W). I also found the dish to be a touch salty—two tablespoons of fish sauce was a lot, even for someone who, like myself, adores the funky, pungent condiment. Next time, I’d start with a tablespoon of fish sauce and increase incrementally, tasting as I go. Despite these small flaws, I was impressed by how comforting this noodle soup was, especially considering that it was pretty much as easy to make—and much more flavorful than—a batch of instant noodles. It definitely earned a spot in my WFH lunch rotation.

“What’s the least appetizing thing I can imagine cooking in a microwave?” I wondered. Cheesecake might not be the least appealing thing I thought of, but it certainly gave me some trepidation. I used Anyday’s recipe, the entirety of which is cooked in one of their containers—no water bath or springform pan required. The filling also eschewed convention (with cornstarch, sour cream, and heavy cream in addition to cream cheese) to recreate the classic texture of cheesecake filling without the oven.

Now, for all the convenience that a microwave provides, this is not exactly a “quick” recipe: It still requires a three-hour rest time in the fridge after it comes out of the microwave. And, as I suspected, the graham cracker crust became a bit too soft and yielding for my taste. If I were to make it again, I’d increase the size of the crust, making it a more substantial match for the ample amount of filling.

That being said, the flavor of the cheesecake was surprisingly good—it wasn’t too sweet, had a nice amount of tang, and featured a pleasantly creamy texture. Being able to adjust the size of the cheesecake was also a huge draw: The smallest serving option, which could comfortably feed up to three people, was perfect for my two-person household. Because most dessert recipes serve six to eight people (if not more), I often get anxious about wasting leftovers—Anyday provides a practical solution that I can see myself reaching for the next time I want to make a single-serving treat for myself and my partner.

For test number three, I wanted to see if I could successfully create a dish without using one of the brand’s own recipes. After all, isn’t this sort of last-minute, convenience-driven experimentation exactly what microwave cooking should be for?

The weather was cold, and I was in the mood for something warming, nourishing, and comforting (AKA: chicken soup). As a starting point, I used Anyday’s instructions for how to cook chicken in the microwave, then shredded the meat and added it to a chicken stock-based broth. Canned white beans and wilted lacinato kale seemed like a natural addition, as did an aromatic base of diced shallots, carrots, thinly sliced garlic, and dried chile flakes.

I started by cooking all of the aromatics in olive oil, plus salt and pepper, in my Anyday dish. I added the beans, kale, and good quality chicken stock, and zapped it for about 10 minutes, pausing to stir and taste the mixture every so often. Once I felt like the kale was soft and the beans were creamy, I cooked the chicken in a second Anyday container, shredded it, and added it to my soup. The whole thing got another two minutes in the microwave and a final squeeze of lemon before serving. It was delicious and arguably the best of the three dishes I tried.

This chicken soup would probably not replace one that’s long-simmered on the stovetop—it lacked the depth of flavor that comes with low and slow cooking methods—but on a busy weeknight? It would definitely do the trick.

This is not a sponsored post—these opinions are entirely my own, based on my experience using Anyday’s cookware set.
What’s the craziest thing you’ve cooked in your microwave? Share below!

How to Use a Clothes Steamer Properly, According to the Pros

How to Make Compost (Because It's Not Hard)