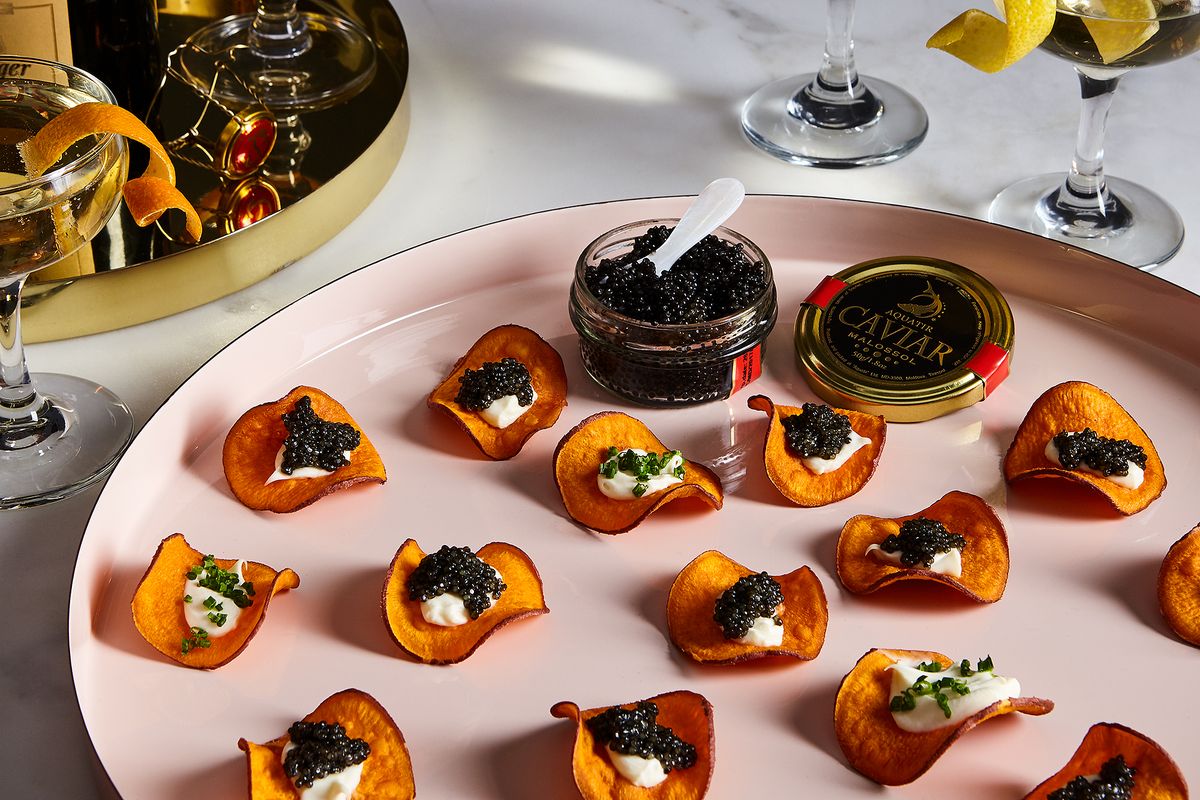 It was the summer of 2021 when I first became a caviar evangelist. I had tried it before and enjoyed the oily, buttery texture, the slight, elegant fishiness, the pop of the eggs as they burst on my tongue, but the price point—and everything the price point seemed to suggest—turned me off. Caviar’s lack of accessibility and its stuffiness seemed unappealing and out of place in the same kitchen where I scarfed my 2 a.m. McDonald’s after a night out.

So you can imagine my surprise when I was handed a can of Miller Lite with a dollop of caviar plopped on the rim as I sat on a dock in the Massachusetts Bay. Alexis Cervasio, owner of EBO Grocery and the mastermind behind Boston’s celebrated East Boston Oyster pop-up parties, was plying her guests with caviar-topped everything. The Miller Lite and caviar combo—which she calls a “lick ‘n sip”—was transcendent.

“I love the reaction we get from people when they see it on a beer can,” said Cervasio. “Salty and refreshing! It leaves people pleasantly surprised.” I never could’ve guessed that a seemingly odd pairing could come together so beautifully. The fresh, clean crispness of a light beer was the perfect companion to the briny, rich eggs.

The “lick ‘n sip” isn’t Cervasio’s only unconventional pairing. Attend one of her pop-up parties, and you’ll discover caviar-topped pizza, crab rangoon and caviar, even glazed Dunkin’ Munchkins topped with a dollop of caviar. She works with The Parlor Ice Cream Co. to deliver customers crème fraîche ice cream with caviar–harkening back to a classic pairing in a fun new format.

“We basically take everything that is offered at a child’s birthday party and put caviar on it,” she said.

Cervasio isn’t the first to embrace the high-low caviar pairing. The caviar-and-chips combo has made its rounds for a while, offering a salt-on-salt pairing for those blessed with naturally low blood pressure. In 2016, David Chang raved about Wylie Dufresne’s caviar-topped chicken nuggets, soon offering a version at Momofuku. Jennifer Pelka served tater tot waffles with caviar at San Francisco Champagne bar The Riddler in 2017. And the “caviar bump” had gained real traction by the summer of 2022, blending a luxury staple with party culture. It seems that caviar has officially entered its high-low era, ready to adapt to the changing definitions of luxury cuisine and appeal to a generation that loves to buck tradition in the name of fun.

Caviar, regarded as an icon of luxury food, didn’t always enjoy its status as a star staple ingredient. According to Petra Bergstein, president and co-founder of The Caviar Co., caviar was so ubiquitous in the Great Lakes region during the 19th century that it was given out at bars as a free snack, like peanuts. Inga Saffron, author of Caviar: The Strange History and Uncertain Future of the World’s Most Coveted Delicacy, wrote that in Russia in the ‘90s, she could buy a kilo (2.2 pounds) of caviar for $100.

But concerns around overfishing and sustainability pushed the industry to the point of crisis; by the mid- to late-2000s, most caviar was farmed, according to Saffron. Demand faltered, then re-emerged. “It goes in and out of fashion,” Saffron said. “It depends on production and price… the price fluctuates depending on how much is being produced at these farms.”

In this post-pandemic era, diners–barred from traditional culinary experiences as we were for months–are hungry for a taste of luxury once again. But many of us are still loyal to sweatpants, and perhaps less inclined to participate in the formal, overdressed dining rituals of our pre-pandemic lives. Add to that millennials’ increasing buying power and simultaneous sloughing off of tradition, and it’s clear we’re in the sweet spot for a high-low caviar boom.

“Just 10 years ago, I could care less about caviar, and I think I can speak for my peers, too, when I say the mentality was: ‘Too expensive, too stuffy, not for me and my cool pals.’ said Cervasio. “Honestly, it wasn’t accessible.”

But times have changed, and tastemakers like Cervasio are trying to make the ingredient more accessible, both in terms of price and palate.

“I think that more and more culinary leaders and hospitality all-stars are having fun with it. We’re all showing people: ‘Hey, you don’t need to be at a white tablecloth restaurant to enjoy this stuff. You don’t need to only put it on blinis with crème fraîche.’”

The numbers seem to back her up. According to Bergstein, The Caviar Co. has seen annual growth amongst millennials since the formation of the company; she estimates that their customer base is around 40 percent millennial.

Of course, this doesn’t mean that the age of the blini is over or that caviar-topped oysters aren’t still a widely beloved delicacy. But the emergence of the high-low caviar pairing does reveal the culinary ethos of a generation that was, in many cases, raised on Happy Meals and Chef Boyardee: Indulgence shouldn’t be limited to a white-tablecloth affair, and we don’t need to blindly yield to tradition.

Hopefully, the embrace of the high-low caviar pairing is an indication that young people are willing to rewrite the script both at the table and beyond. All I can say is that I have hope for a world in which caviar can co-exist with chicken nuggets.

Would you try donut holes served with caviar? Sound off in the comments below!

12 Fall-Ready Recipes for the Whole Family