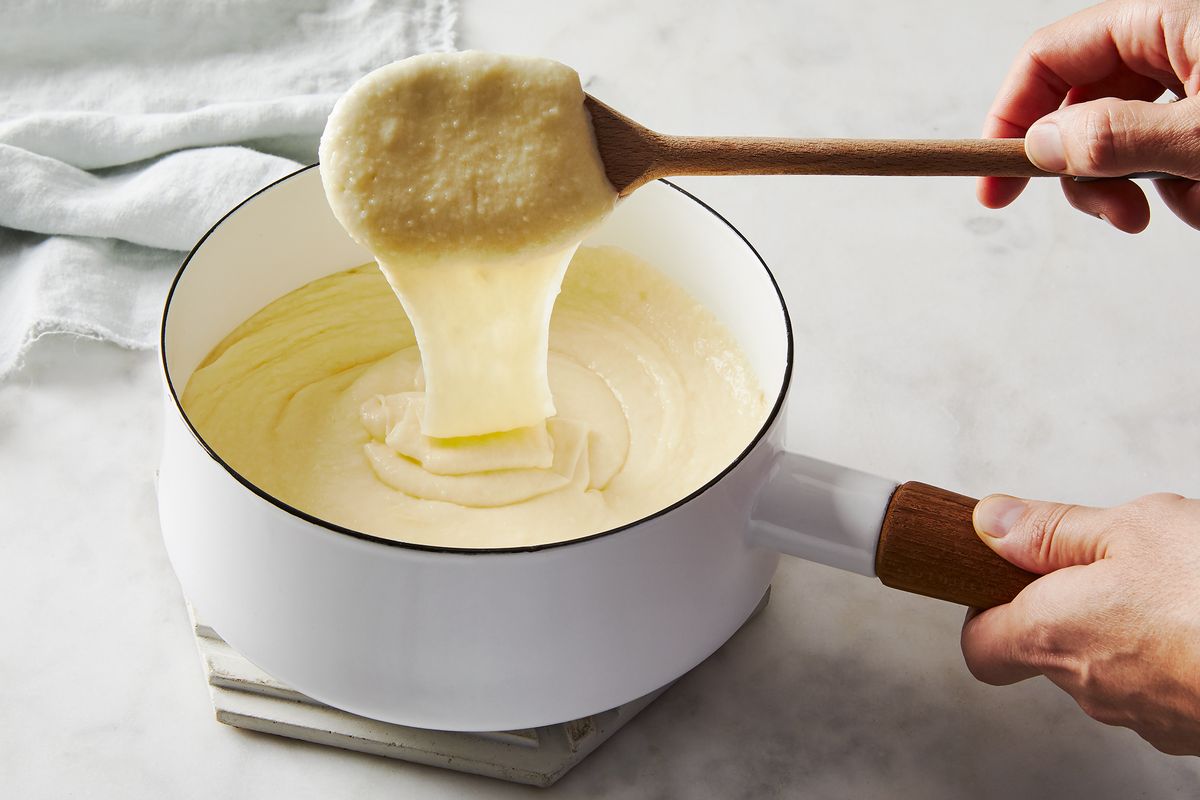 Raclette has been all the rage for several years now, and it’s no surprise: What could be more mesmerizing than seeing the eponymous Alpine cheese melted and scraped onto plates of potatoes and charcuterie in all its gooey splendor?

But if you ask us, the next cheese craze may well be the slightly-lesser-known but no less delicious specialty of aligot. Made of mashed potatoes stirred together with a consequential amount of fresh cheese local to the central French Aubrac region, aligot boasts a slightly stretchy and very cheesy texture just as worthy of a spot on your Instagram feed.

Where Does Aligot Come From?

Like many regional dishes in France, aligot’s birth is the stuff of legends—one legend, to be precise, cited by local cheese experts Daniel Brugès and Christiane Valat, co-authors of Nos bons fromages d’Auvergne (Our Good Auvergnat Cheeses).

Picture this: It’s the Middle Ages, and deep in the French mountains, three bishops walk into a bar (or, er, a roadside inn—rather more common in medieval France). Each bishop bears a different ingredient to share: one has butter; the second, milk; the third, potatoes. None of them being particularly talented cooks, they ask a local buronnier—a mountaintop cheesemaker—to unite the goods in a dish to fill their bellies.

Obedient but strapped for ideas, the buronnier opts to simply mix everything together in a big pot. The hodge-podge proves an undeniable success, and as the bishops fight over the last spoonfuls, they stir the mixture so much that it becomes elastic and gooey. Aligot is born.

The legend is fun and fanciful, but unfortunately, like so many good legends, it doesn’t hold water—in large part because while the dish was indeed likely invented in the 12th century, potatoes would be a foreign, suspect, and even occasionally illegal food throughout France for another six hundred years, give or take.

The legend is fun and fanciful, but unfortunately, like so many good legends, it doesn’t hold water.

Aligot’s invention can likely be attributed, not to buronniers, but rather to local monks providing shelter to Christian pilgrims on their way to Santiago de Compostela, Spain from as far away as Geneva. According to Brugès and Valat, when the pilgrims requested something to eat (“aliquis” in Latin) at monasteries, they received a thick bread-and-cheese soup. The Latin word—influenced by the local Occitan dialect—transformed, bit by bit, into “aligot.”

We have Antoine-Augustin Parmentier to thank for the introduction of spuds. After being imprisoned in a Prussian prison camp, the French pharmacist realized in the late 18th century that his compatriots’ misconceptions linking potatoes to leprosy or the plague were grossly exaggerated, and he returned to France hell-bent on convincing others to give it a try.

Thanks to some gonzo marketing by Parmentier—who was keen to help find a substitute for wheat flour, following several lean years in France—potatoes were cultivated on the Aubrac plateau beginning in the 19th century. Eventually, according to Jean-Baptiste Bouloc, head of marketing for the Jeune Montagne cheese cooperative, tubers came to replace bread in the cheesy local delicacy.

And which cheese had the honor of a cameo in aligot? According to Brugès and Valat, it was tome fraîche, a several-days-old iteration of local pressed Laguiole. While 19th-century buronniers had no rights to the latter—all of it which went straight to their landlords’ larders—this fresh cheese, just a few days old, was ripe for the eating. Low in salt and high in moisture, it has a mild flavor reminiscent of mozzarella—if mozzarella were pressed instead of pulled. Added to aligot, it brings all of that sought-after stretchiness.

Aligot may have remained a staunchly local delicacy if not for the development of the railroads in the mid-nineteenth century. As locals left their Aubrac homes for the capital, aligot went with them, soon becoming a staple of the dining establishments they opened. Today, approximately 40 percent of Paris’ cafés and brasseries are still owned by people with Auvergnat roots. At one such spot, Le Plomb du Cantal, manager Sébastien Robin says aligot long been the star of the menu, served to salivating patrons tableside right from a tiny copper pan in all its stretchy, gooey glory.

Texture is something people appreciate in cheese, often even more than aroma or flavor. Gooey equals good.

Aligot’s popularity has long ebbed and flowed, according to Bouloc, notably when Pope XXIII nixed the obligation for meat-free Fridays in 1965. But recently it’s been on the rise again, thanks to Instagram, TikTok, and our collective obsession with “cheese pull.”

The vivid image of gooey strands of cheese, according to Quartz, is like candy for our brains, releasing chemicals that activate an “addiction” and craving instinct. Essentially, the images evoke mouthfeel, posits cheese instructor Susan Sturman of cheese aging school MonsFormation. “Texture is something people appreciate in cheese, often even more than aroma or flavor. Gooey equals good.” And is there a more camera-ready dish than aligot?

“We put on a bit of a show!” says Sébastien Robin, the restaurateur. “It stretches from the pot; there’s loads of cheese in it.” (It’s pretty much a 2:1 of potatoes to cheese!) And its flavor? Irresistible.

If you can’t make it to France, aligot is within the reach of any home cook, thanks in part to its short ingredients list. First: potatoes. You want a soft-fleshed variety like Yukon Gold for buttery flavor and rich texture. And unlike many other mashed potato recipes, you can even cook and mash them in advance.

The cheese is where Americans may hit a snag. Raw-milk tome fraîche from Aubrac is the “essential ingredient for aligot,” explains Bouloc. “That’s what gives it its stretchiness and its characteristic texture.” Unfortunately, as it is aged fewer than 60 days, it’s also is off-limits for American home cooks. As a stand-in, Brugès and Valat suggest a young local tomme like Cantal or Laguiole, while Paris-based cheese educator and tour guide Jennifer Greco recommends “butter, heavy cream, and a 50/50 ratio of shredded Gruyère (or Comté or Fontina) for nutty flavor, and shredded, dry mozzarella for extra stretchiness.”

Whichever cheese you opt for, you’ll need to mix it into the mash vigorously, for about 10 minutes. And once all of the cheese has melted, don’t wait too long to serve it, lest it lose its camera-ready stretchiness. “If you hold it on the heat too long,” warns Bouloc, “the ‘strings’ break.”

Most importantly, make a bit of a spectacle while serving aligot. Dollop it from copper or cast-iron pots onto the plates of your dinner guests tableside to show off its texture—and consider making it the star of the meal. Though aligot is often served alongside a grilled sausage, cured ham, or roast pork, given its history as a dish for lean days, the way I enjoy aligot most is all on its own.

How to Fix Drafty Windows Before Winter Weather Arrives

Do I Really Need to Bake With Cake Flour?

The Remarkable Variety of Caribbean Cornmeal