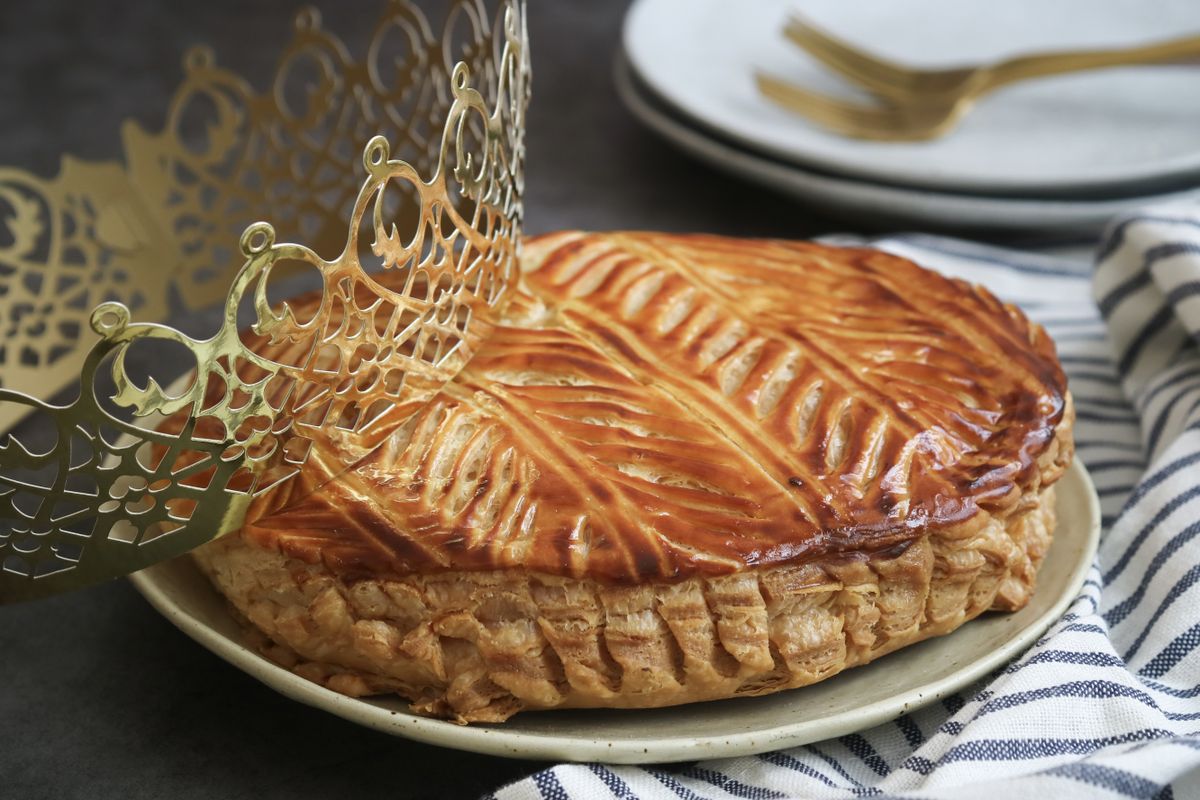 Just after Christmas every year, baguettes and croissants move out of the spotlight in French bakeries (at least temporarily) to allow the galette des rois—the king cake—to take their place. A puff pastry pie filled with rich frangipane, it’s a delightful treat sure to please any fan of marzipan.

But while many choose their galette for its filling—which nowadays can run the gamut from plain to pistachio, chocolate to coconut-turmeric—few spend as much time thinking about that most emblematic of additions: the fève. (Americans may know its equivalent, the “baby” hidden inside a New Orleans-style king cake.) Its very presence, according to tradition, designates the “king” of the festivities each January 6th.

American readers may suppose we’ve gotten our dates wrong, but that’s no typo: In France, king cake—devoid as it is of purple, green, and gold icing—isn’t just plainer in appearance than the New Orleans version. French galette also stands out in that it’s served, not on Mardi Gras Tuesday, but rather on Epiphany, a feast celebrating the arrival of the three wise men at the birth of Jesus.

These days, galette season in France has expanded past the 6th: Any modern January get-together invites the presence of a galette. (I myself sampled 10 last January alone.) Before tucking in, tradition demands that the youngest member of the party climb under the table, announcing upon whom each slice should be bestowed. The one who finds the porcelain fève in his or her piece earns the title of king.

Fèves, as their name suggests, were originally simple dried fava beans, used as tokens to designate temporary kings in traditions dating back to Ancient Rome. Of course, in this pre-New-Testament era, fèves had nothing to do with Epiphany. Rather, in honor of the winter solstice any sort of hierarchy was temporarily elided, giving even the lowest citizens the possibility to be designated king by the tiny bean symbolizing imminent spring. Bit by bit, as with many pagan traditions, the fève became part and parcel with Catholic Epiphany celebrations.

It wasn’t until the Middle Ages that the fava bean was replaced by a porcelain trinket, a change made, according to National Geographic, to reduce the risk of cheating. In the 19th century, porcelain fèves were long imported from Saxony, and according to passionate fève collector Cyrinne Prudhomme (the woman behind the fève-specific site, Fabophilie), these intricate, hand-painted fèves quickly evolved from simple naked babies to encompass other themes like animals or playing cards.

The tradition nearly disappeared during the French Revolution, when secularism began to take hold and being named a king made you a good candidate for the guillotine. In 1793, attempts were made to forbid the cake altogether, but the French, never ones to say no to pastry, largely ignored the law. Some baked up “equality” galettes sans fève, and it’s this iteration that has been served at the Elysée palace since the time of Valéry Giscard d’Estaing. But for most, fèves soldiered on. After the First World War, their production was moved local, to Limoges, a city already famous for its porcelain industry. At this point in time, Prudhomme says, “fèves became quite plain, for lack of time, manpower, and means.”

Limoges nevertheless remained the capital of fèves until the middle of the 20th century, when plastic figurines slowly began replacing the porcelain ones. By 1988, Limoges Castel, the porcelain fève specialist that, at its peak, turned out several million fèves a year, had ceased production altogether.

Prudhomme started her fève collection in the early 1980s, at the tender age of five. “The little object was cute and tiny, and we could easily hide it in our pockets to discreetly trade with our friends at school,” she recalls.

The desire to turn her interest into a collection seemed “only natural.” Her first fèves, however, were “nothing extraordinary,” she says. They were mostly plain white and their shape, size, and design remained consistent over the years.

All that changed in 1989 when, prompted by the bicentennial of the French Revolution, porcelain fèves began their resurgence in France. In 1990, two years after Limoges Castel had ceased production, Jean-Michel Rojat founded Panessiel near Grenoble, a company with the goal of preserving the tradition of made-in-France fèves. Soon after, Prudhomme says, well-known pastry chefs “began producing their own models.”

“Some put themselves center-stage by making fèves in their own image, or in the image of their pastry shops,” says Prudhomme. Others produced toy-like characters to catch the eye of children or engineered ranges like Pierre Hermé’s puzzle pieces, which encouraged users to complete the set (and thus buy even more galettes).

“There were so many that it was impossible to collect them all,” Prudhomme recalls.

While today 95 percent of fèves are made in Asia, the French market leader Panessiel makes some one million each year and produced its 10 millionth French fève this past November. It’s the fève producer of choice for some of French pastry’s most famous names, including Pierre Hermé and Cyril Lignac. But some bakers rely on even smaller local producers.

Camille Drozdz and Anthony Bureau are the ceramicists and co-owners of Ici l’Atelier, in La Ciotat, not far from Marseille. At the behest of a Niçoise chef, they began making their own fèves a few years ago.

“Word of mouth did its work, and a few clients who had seen the pieces we made for her followed,” they recall. “The idea of working on a sculpture on a small scale seduced us immediately, allying our creativity, our savoir-faire, and that of an artisan baker and pastry chef.”

Above all, Drozdz and Bureau are intrigued by the prospect of propagating this tradition in a contemporary way, crafting unique collections for each baker with whom they work. Drozdz recalls her own Epiphany memories: uniting around the old wooden table at her grandmother’s house with her sisters and cousins.

“The smell of hot butter in the puff pastry,” recalls Drozdz, “And I, the youngest, under the table proudly calling out who would get each piece.”

Anthony Courteille is the baker behind Paris’ Sain Boulangerie, a bakery known for its organic ingredients and artisan savoir-faire. He too remembers the galettes of his youth. “I loved it,” he says. “Just imagine: You’re a kid; you’re six or seven, and you’re told you can be king.”

He bakes two galettes each season: one plain, and one flavored. Last year’s chocolate-hazelnut will this year be replaced by a collaboration with Parisian coffee shop La Main Noire, whose turmeric-scented Golden Paste—usually used as a base for golden milk lattes—will be married with coconut and pineapple. Coirteille’s fèves were designed by Audrey Giacomini of Giaco Studio in Montreuil, just outside of Paris. Each features a hole, encouraging the finder to repurpose it into earrings or a necklace.

“I think it’s a shame, in our society of over-consumption, that we no longer give value to things,” says Courteille of his inspiration. “You can create a story with this object and give it value.” Three new fèves resulted from Giacomini and Courteille’s collaboration: a leaf, an almond, and—in a tribute to the trinket’s humble origins—a fava bean.

Have you tried a French galette des rois? Let us know your thoughts below!