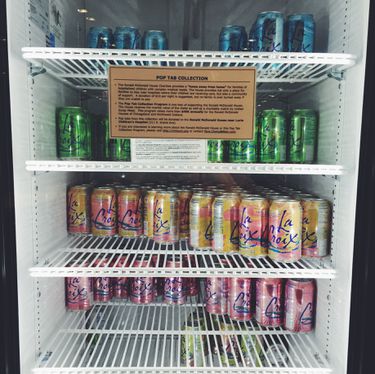 This summer, I asked Amanda Sims if she wanted something at the grocery store: “San Pellegrino,” she specified: “Not Perrier.”

I found her predilection to be quirky until I realized that loyalty to sparkling water beverages runs far deeper than just a fizzy way for staying hydrated.

Samantha Weiss-Hills frequently brought in her own personal can of La Croix (unflavored or lime) from home—even though our old office is equipped with a soda maker—while former Food52 intern Taylor Rondestvedt prefers Mendota Springs Sparkling Water, another Midwestern brand.

And then my friend Rebecca sent me this photo of the refrigerator at her Chicago workplace:

But do these brand loyalties simply grow out of habit, or do they have a basis in truth (or at least in taste differences)?

To find out, we did a blind taste test of 17 seemingly similar products—seltzer water, club soda, carbonated mineral water, and sparkling water—to see if we could tell the difference. (And to figure out if Sam could identify La Croix from the lineup.)

Here’s what we concluded:

Sparkling water is a broad umbrella term that can be used to describe club soda, seltzer, or sparkling mineral water. Here were the five bottles that self-identified as “sparkling water” without a more specific demarcation.

This had a “very clean flavor” that our tasters predicted came from a glass bottle (they were right!). The flavor was neutral and “inoffensive,” while the bubbles were big and slow-acting.

While some were put off by a “plasticky” taste, others detected (to borrow a word from wine) “minerality.” It’s like “sucking on a rock,” said Leslie.

The bubbles were deemed “perfect: soft but present.” Each bubble was said to be a distinct individual, popping identifiably on the tongue. This, too, had mineral notes—”but in a good way.”

Samantha correctly identified her beloved sparkling water, which she calls “summer in a can.” The bubbles—smaller than most of the other drinks—act as if they’re on a “time release” or a “cascade,” starting off strong and fizzing out slowly on the tongue

Tasters noted a subtle sweetness (“it has a taste of beginning”) and very little carbonation.

“Tastes like tap water,” said one taster. The small bubbles were “so small, they’re prickly,” like Pop Rocks or needles.

Seltzer is plain water that has been artificially carbonated with carbon dioxide, with no added ingredients (like salt or potassium salts).

With many more bubbles than the others in its group, it was described by one editor as “slap-to-the-face aggressive”; another said it was “almost foamy.”

It had large, mellow bubbles and a strong “water” taste, though we did notice a citrusy, lime-y flavor upon first sip.

The bubbles are quick, imparting a pinpoint sensation: One editor explained the sensation as “ping-ping-ping, very fast.” The texture was foamy and light, and although there were no added ingredients, some said it had a slightly lemony (and/or slightly metallic) flavor.

“This is like cake,” said one taster. Almost sweet and easy to drink, with fewer and tinier bubbles, this beverage is hereby dubbed “cake water.”

The flattest of the five, it was compared both to tap water and to flat Champagne. The bubbles are floaters, traveling swiftly to the back of the throat, where they make themselves known.

Club soda is seltzer’s bulked up brother: It’s got sodium salts and/or potassium salts, which can include table salt and baking soda. These are added to neutralize acidity and imitate the flavors of natural water.

While some of us found the bubbles to be almost too harsh (causing a tingling sensation from the lips inwards), others predicted it was be one of the most expensive of our tasting. Another person thought it “could be Perrier,”

Surprisingly, this was also identified as Perrier. It had a distinctly citrusy, “lime-forward taste”—the editors couldn’t believe it wasn’t flavored. (Q-Club, according to its website, is made with Himalayan salt.)

Mineral water is defined as sparkling water that comes from a mineral spring. According to the The Food and Drug Administration, it must contain “no less than 250 ppm total dissolved solids that originates from a geologically and physically protected underground water source.”

Neither minerals nor carbonation is added (with the exception of San Pellegrino; according to the Huffington Post, additional carbonation is added to Pellegrino by the bottler). “Spring water,” on the other hand (see Mountain Valley Spring Water above), comes from a natural source but contains less than 250 parts per million dissolved minerals.

Tasters were surprised by the tiny bubbles, so small that some people found it felt “almost flat.” The little bubbles moved in all sorts of directions, like electrons, and Amanda Sims—the one who had specified I not buy Perrier—said, and I quote, “I like it.”

Described as simultaneously foamy and flat, Gerolsteiner also had an unusual taste: “Is that wet wood?” asked Ali Slagle. Others identified notes of rainwater.

The bubbles, tasters noted, were weak: “not flat but not trying hard enough”, “a man in a tutu starting to leap.” Leslie Stephens declared she was uninterested. No one identified this famous, fancy drink (not even its fan Amanda Sims).

Skipping the grocery store? Or maybe you don’t want to schlep heavy bottles and cans all the way home? There are excellent at-home carbonators on the market that let you make seltzer on-demand. The soda makers store carbon dioxide compressed into cartridges. Fill up your bottle with cold tap water, screw it into the machine, and with a press of a button, you have carbonated water in seconds. Check out SodaStream’s Terra and Art sparkling water makers. Our favorite? Aarke’s stunning carbonator, which has a slender design and svelte finish that looks as good on your countertop as it is functional.

The seltzer aisle is filled with delightful flavored sparkling waters that are a low-to-no-sugar alternative to soda. Flavored sparkling water brands are getting more creative with flavor combinations every day, gaining inspiration from natural fruit flavors and showcasing them without the use of added sugars or artificial sweeteners. Here are a few of our favorite fruity and fizzy sips:

There are classic fruit flavors like raspberry lime (Sprindrift is king here,) or more tropical flavors like Sanzo’s, which include lychee, mango, yuzu with ginger, and calamansi lime, Something Nothing’s bright and fresh cucumber seltzer is all Food52’s editorial assistant Lucy Simon wants on a hot summer day, and you can never go wrong with a twist of lime Topo Chico.

And so, a fitting conclusion to our very inconclusive sparkling water test. People cling to a certain type of sparkling water—they’re used to it, they actually like it, or they haven’t tried many others. And there are other factors, like temperature, what you’re eating it with, how many sparkling waters you’re trying at once, that alter the experience.

This article was updated in June 2022 because we’ll never stopped loving seltzer.

This post contains products independently chosen (and loved) by our editors and writers. As an Amazon Associate, Food52 earns an affiliate commission on qualifying purchases of the products we link to.

What’s your preferred brand of sparkling water? Defend your choice in the comments below!

These Spiced Gin Cocktails Will Warm You From the Inside Out

9 Thanksgiving Stuffing & Dressing Recipes for Your Best Feast Ever