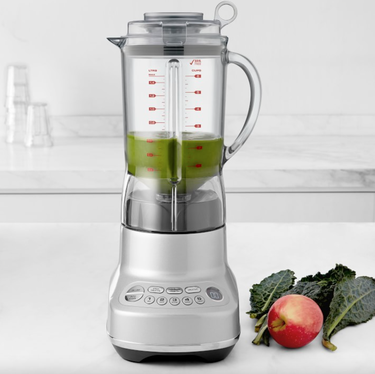 While blenders are typically used for liquid-based recipes—think sauces, cashew creams, and soups—food processors are often used for everything from puréeing fruits to dicing vegetables. As someone who doesn’t have the best knife skills—and also starts hysterically crying whenever I chop an onion—I’ve found a food processor to be a total game changer. I mean, it’s saved me a lot of time (and, okay, tears). But if you’re looking for an appliance that can do double duty, there are models that have interchangeable blender and food processor attachments. That’s right, one device that can save you major money and space in your cabinet.

The two appliances might seem radically different in nature, but they’re both designed to save you a lot of time and legwork. So what’s it going to be? A blender, food processor, or combo appliance? And once you’ve made that decision, which model is actually worth adding to your cart? To help, I tapped a few professional chefs to share their thoughts. These pros rule any kitchen they step into, and if these appliances can streamline their cooking, they’re poised to become the workhorse of your own kitchen, too.

There’s a reason why Elle Simone Scott refers to Breville’s Fresh & Furious Countertop Blender as her “weapon of choice.” Think of this pick as your standard blender with some food processing functionalities. “I love that its capabilities range from delicate green smoothies to the hefth of almond butter,” the food stylist and America’s Test Kitchen executive editor explains. “I live in a small apartment, so the fact that it’s reasonably quiet and compact is ideal.” With an efficient blending system and 60-second auto-timer, the Fresh & Furious brings some ease to the food prep process.

Small food processors can make a big impact—just ask cookbook author Molly Baz, who favors Cuisinart’s Mini Prep food processor. “I use this one for smaller-batch items that a standard food processor can’t really handle, due to its large size: sauces, vinaigrettes, marinades, rubs, aioli, pesto, grating cheese, chopping nuts, and so on,” she shares. “There’s rarely a day in my kitchen that I don’t bust it out.” Clocking in at 2.6 cups, this option is perfect for compact kitchens.

As the founder and chef of Edy’s Grocer, a Brooklyn-based market and caterer that offers top-notch Lebanese food, Edouard Massih is no stranger to the power of an excellent food processor. “We make 20 mezes in house and have over 500 containers of them per week,” he shares. To do it all, Massih enlists Cuisinart’s 14-cup food processor, which has the gusto of a food processor with the blending capabilities for smooth, creamy dips. “I’ve been using Cuisinart food processors for so long now, and I have adapted that at Edy’s Grocer,” he shares. “Whenever we’re making a big batch of hummus, muhammara, or baba ghanoush, we have two Cuisinart food processors going, and they get the job done. It’s truly the best; I have had it for so many years now, and it’s still doing the best job ever.”

If you’re willing to invest, Vitamix’s 5200 delivers as both a blender and food processor thanks to its food processor attachment. This will make the already-pricey blender even more expensive, but it’ll pay for itself over time. “The thing with the Vitamix brand is that it’s durable, blends the smoothest over any blender hands down, and can blend tough ingredients, too,” explains Kelly Scott of Kelly’s Clean Kitchen. “I personally have the Vitamix Professional Series 750 because I expected it to be better than the [5200 Standard], but I would rather have the basic one because it’s cheaper and does just as good of a job!”

So what makes Vitamix’s 5200 blender worth the hype? “This model features simple manual controls: an on/off switch, a variable 1-10 speed knob, and a high-speed switch that goes to 11,” says Jesse Miner, a vegan personal chef who has relied on this gadget for more than 15 years. “I use my Vitamix 5200 daily to effortlessly blend refreshing smoothies, flavorful sauces, and the smoothest cashew cream you’ve ever tasted.”

Though blenders and food processors can be an invaluable addition to your kitchen, they can also cost a ton. Fortunately, chef Jamika Pessoa’s top pick is super budget-friendly. “Once you turn on the Express Chop, don’t blink or else you will miss it—whatever you put in there is chopped with a quickness,” shares Pessoa, who has worked with the brand before. “The blade is super fast and efficient. No huge chunks or having to reblend several times. Quickly blitz with one touch, and the job is done with ease.” Another thing she loves? This model is incredibly easy to clean, simplifying the cooking process from start to finish.

What’s the Difference Between a Blender and a Food Processor?

Though blenders and food processors might seem similar, they actually have different purposes. Simply put, a blender is typically used for liquid-based ingredients—whether it’s a frothy milkshake, a drizzle-worthy sauce, or a dip. (Psst…a blender is also great at crushing ice and puréeing beverages.) But wait, can’t a food processor also purée? Yes, and it can also slice, dice, grate, and shred your ingredients. As a general rule of thumb, recipes that require a straw or dipping device, like chip, are best suited for blenders. Meanwhile, meals that use forks and spoons can usually work just fine with a food processor.

But before you pick one over the other, it’s worth noting that some devices can do both, either with built-in functions or separate attachments. That way, you can have the best of both worlds rolled into one gadget.

Do you prefer a blender, food processor, or a combo of the two? Let us know below!
This post contains products independently chosen (and loved) by our editors and writers. Food52 earns an affiliate commission on qualifying purchases of the products we link to.

10 Affordable Kitchen Staples You Should Always Keep On Hand

2 Corner Store Cocktails for When You Need a Lil' Convenience