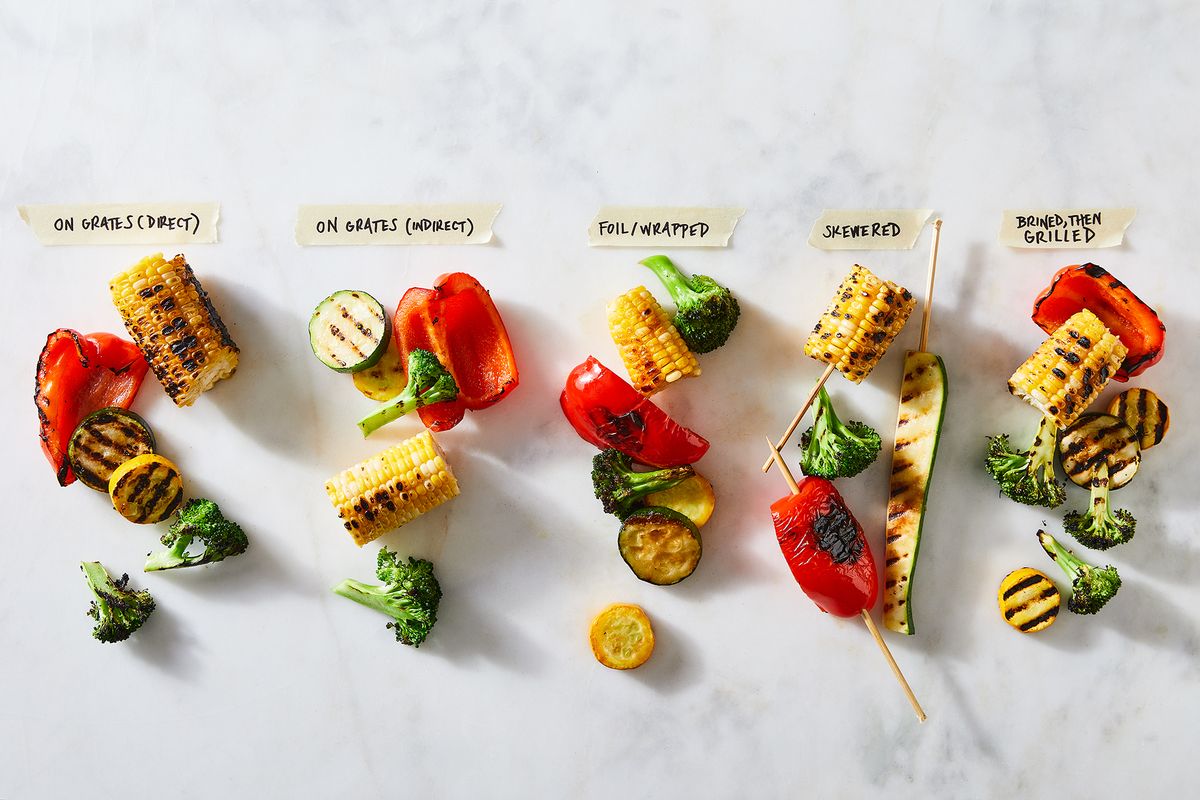 In Absolute Best Tests, Ella Quittner destroys the sanctity of her home kitchen in the name of the truth. She’s boiled dozens of eggs, mashed a concerning number of potatoes, and seared more Porterhouse steaks than she cares to recall. Today, she tackles grilled vegetables.

If I’m not manning the grill, I am standing right next to it, completely transfixed. (Just try to show me your vacation pics, I dare you.) Cooking over an open fire has always fascinated me, perhaps because I grew up with a father who quit organized religion to worship his Big Green Egg, or perhaps because a properly charred bite of pork belly is a universally transcendental experience. And unlike a neighbor with a story to tell me about his achilles tendon, the grill never ceases to run out of ways to surprise me at a cookout.

Enter: summer vegetables. Each has a distinct flavor profile and moisture content; each demands its own grill protocol. For this installment of Absolute Best Tests, I’ve focused only on the gas grill, though there are of course many (perhaps worthier) specimens with which to sear vegetables until tender, such as wood-burning grills, hibachi grills, charcoal grills (like the basic Weber, or like a kamado cooker), pellet grills, and so on.

The best cooking method for broccoli turned out to be a combination of direct and indirect heat. (Using solely direct heat caused the florets to char before the stem could cook through; using just indirect heat took ages to produce limp, uneven florets.). Cooking the broccoli over direct heat first, then finishing it over indirect heat proved most effective. Brining also worked wonders on broc. It infused the florets with serious, tangy-sweet flavor that elevated the result well beyond the regular grilled trial. If you have time to brine your broccoli, brine like the wind.

The foil packet broccoli was also interesting, in that the buttery-herby flavor infiltrated the florets more thoroughly than it did any other vegetable…but the texture reminded me of soggy airplane food. (One friend began referring to it bitterly as “the buffet broccoli.”) I can’t imagine wanting broccoli so soft, then turning to the grill rather than simply roasting it en papillote (in parchment paper) or using the steamer basket.

With broccoli, skip the skewer unless you’re willing to spend extra time on the arrangements. Due to florets’ eclectic shapes, skewers made it difficult to achieve an even cook, and complicated the flipping process.

“High-moisture vegetables lend themselves to quick, high-heat direct grilling, whereas lower-moisture vegetables require the gentle prolonged heat of indirect grilling,” writes Steven Raichlen in How to Grill Vegetables. This proved true for bell peppers, which were best after a direct heat–only sesh on the grill. They remained a touch firm, and got a nice char on the outside. (Their indirect heat counterparts were undercooked even after 20 minutes.) Direct heat also kept my peppers from turning the texture of canned green beans. (Looking at you, foil-packet bells).

To my surprise, when brined, the bell peppers did not absorb much additional flavor. When grilled on a skewer over direct heat, they were equally delicious to the unskewed direct-heat batch. There was one difference: slight variance in texture around the center of the peppers where they pressed against one another (like when two pieces of rigatoni stick together in boiling water so there’s a crunchy half-inch at the junction). If you’re looking for texture variation–some crunch, some softness–with your grilled pepper, reach for a skewer.

Squash grilled over direct heat was excellent: soft and custardy in the middle, going translucent in some places like baked apple, with crispy sear spots in others. The flavor was best after grilling it over direct heat only. (Or, mostly, since I sliced one batch a little too thick, and had to finish it over indirect heat, which was comparably good.)

The indirect heat squash was futile; it took forever to cook through, and never developed a good flavor.

Skewered squash was interesting; I cut it into long batons that were thinner than the discs I stuck directly on the grill, so the edges were soft and charred, with more al dente centers.

Foil packets produced squash that was borderline offensive. Rather than infusing it with flavor, the butter- and herb-filled packets caused the squash to self-boil, producing a weepy, flavorless mess. I could not endure a second bite.

The brined squash was delicious, but its texture wasn’t as appealing as the unbrined direct-heat squash. (It was weirdly swollen, and not as custardy.)

It’s not a particularly hot take to say that even poorly prepared corn, in corn season, is going to be excellent. That’s the thing about in-season corn: It’s a perfect food. You can eat it raw, you can eat it grilled, you can turn it into butter.

That said, the direct heat–only corn was my favorite of the batches. Its kernels retained quite a bit of juiciness and got a nice char in spots, which was both visually and textually alluring. The brined corn was also insane–salty-sweet–but reminded me of a beauty pageant contestant in too much makeup. Brining would be a great way to make shoulder-season corn more exciting, but it’s simply unnecessary for an already-good ear.

The foil-packet corn was good, but I missed the char of the direct grill. The indirect-heat corn was delicious, but a little more limp than I would have liked.

Grilled vegetables are an incredibly personal matter. Generally speaking, your grill set-up and preferences will determine your “best” cooking method — typically that will be a combination of direct and indirect heat and orientation (i.e., grill basket, versus right on the grates, versus on a skewer). That said, these tests show that when in doubt, you can’t go wrong with the following methods:

What’s your favorite way to grill vegetables? Let us know in the comments!

The Carry-Ons You Need If You’re Traveling This Summer

The Best Blenders & Food Processors That Chefs Use Every Day