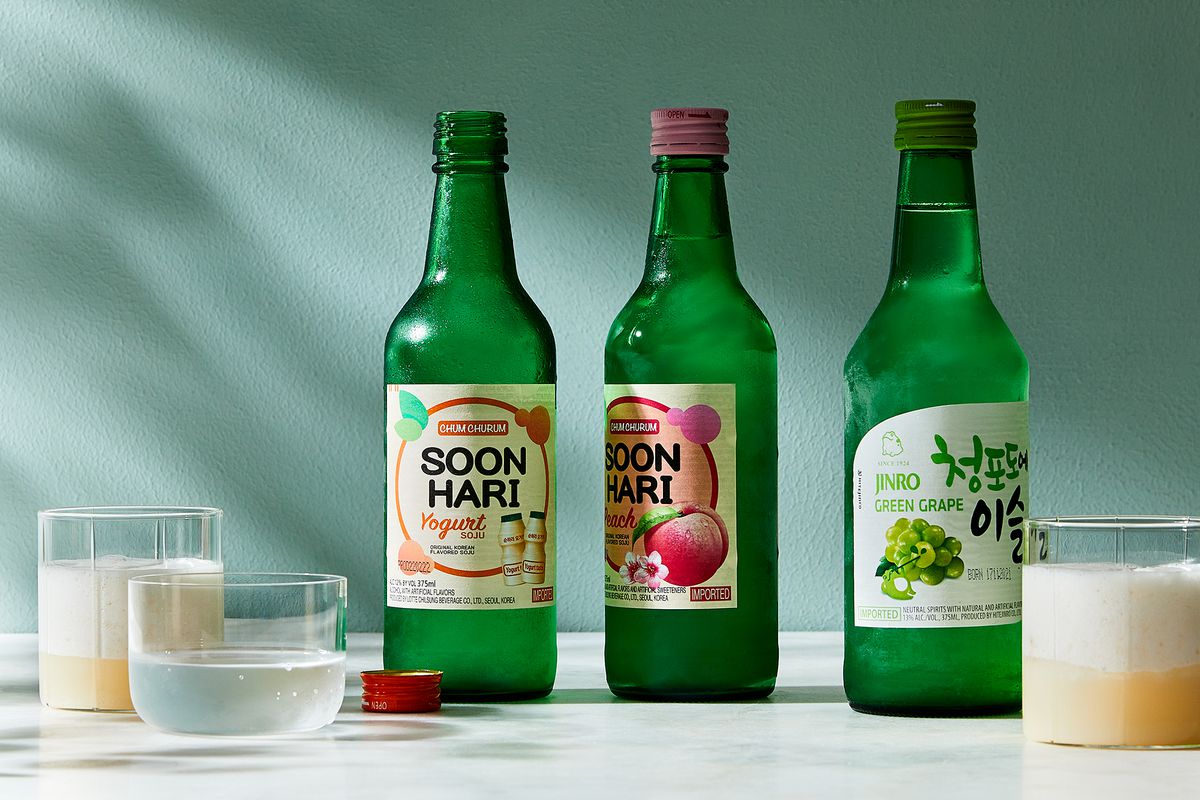 As the temperature rises, our collective palate starts to shift towards light and refreshing kinds of beverages. Enter: soju, the beloved national liquor of choice in Korea that should be on your radar.

For a long time—at least in the U.S.—soju was primarily associated with Korean barbecue joints and Korean restaurants in general. But it’s now popping up in liquor stores across the country, with a selection of brands and flavors. This fragrant and crisp liquor is easy to drink, yet will still surely give you a buzz. And now, like many aspects of Korean culture, it’s making its way across the Pacific Ocean in a big way.

Soju is a colorless grain-based distilled liquor with an average alcohol content of about 15 percent, with the exception of some high-proof sojus up to 50 percent. Traditionally made with rice, soju can be distilled from other types of grains, partly due to a ban that stopped using rice in soju production during past years of hardship in South Korea. These days, soju is made largely using rice with other grains mixed in, such as wheat and barley. Its flavors vary depending on the brand, but general notes include sweetness accented with plum, malt, and a light hint of buttery richness, similar to Japanese sake.

How to Drink It

Like in many Asian drinking cultures, soju is typically consumed neat as a sipping beverage to accompany meals. As the average soju is low-proof with a similar alcohol content to Japanese sake, soju can be as mellow as a glass of red wine, which is why it pairs so well with food. In the traditional way, soju is sold by the bottle at restaurants in Korea. But a U.S. law forbids such practice and requires restaurants to sell soju by the glass. To find a middle ground, restaurant staff typically bring out the bottle and pour the first round of soju for you.

There are many soju brands, some of which are available in the U.S. market. Jinro is the most well-known brand producing soju, with its quadruple-filtered Chamisul line being the most popular soju product in Korea. Other brands, such as Cheoeum-Cheoreom (the maker of Soonhari flavored soju) and Good Day, are also widely distributed and loved by many fans worldwide.

In contrast to soju’s long history in the Korean peninsula, flavored versions are more of a contemporary iteration of the old spirit, and some may see them as an attempt to market the drink to younger Koreans, who are drawn to the lower alcohol content and fruity sweetness. Popular flavors were developed largely based on fruits that are popular in Asia, with mango, lychee, and pear topping the popularity list. As the flavors of plain soju are largely neutral with a subtle hint of sweetness, the added fruit flavors tend to take dominance, resulting in a playful, fruit-forward, and smooth drink that may get you drunk before you know it.

Then there’s the yogurt-flavored soju, which has seen unmatched popularity in overseas markets outside South Korea, such as Australia, ever since its debut. As compared to western yogurt, the “yogurt” replicated in this soju is a fermented, probiotic beverage that uses a different strain of bacteria and is lighter in texture and sweeter. Yakult, a Japanese company that is credited with the original formulation of this yogurt drink, is the most popular brand. As many people across East and Southeast Asia started drinking this yogurt as kids, its flavor is synonymous with their childhood memories.

To make it easy on the nose and refreshing for the hot summer time, chilling soju prior to serving is an approach popular in Korean restaurants. Because of its alcohol content, you don’t have to worry about the beverage freezing easily, unless you have a particularly cold freezer. After chilling, the strong alcohol flavor becomes subdued and the refreshing fruity and sweet notes take center stage.

In addition to drinking it straight, soju has a place in cocktails, too. One of the most popular soju cocktail varieties is the refreshingly delicious soju slushie, which blends soju with Yakult yogurt, lime juice, and ice, similar to a smoothie.

For those who prefer something fizzy and stronger, seven parts beer and three parts soju put together makes a new drink called somaek, which merges two words—soju and maekju—together and is literally translated as “soju and beer.” Regardless of what route you’re taking, grab a bottle of soju next time you visit a liquor store and make sure to enjoy it with family and friends as it’s a social drink in Korea.

What’s your favorite way to sip soju? Let us know in the comments below!