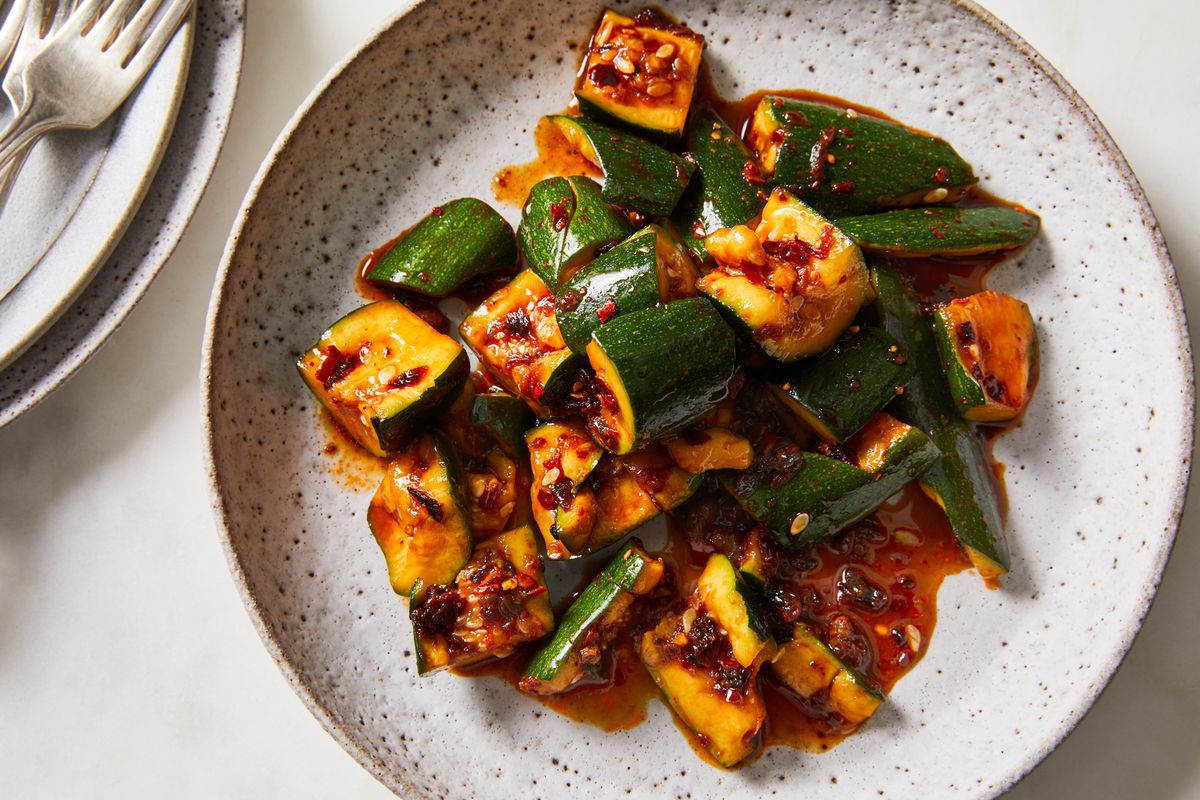 On its own, zucchini is a relatively humble ingredient—especially compared to its more popular summer produce peers (see: juicy heirloom tomatoes, sweet corn on the cob, or richly-colored eggplant). But what zucchini lacks in pizzazz, it makes up for in versatility and adaptability. We have recipes for savory pies and galettes to breakfast-approved quick breads. And that’s not to mention tons of hearty mains (pasta or paella, anyone?) and potluck-ready sides.

Here are our 52 favorite zucchini recipes—so no matter how you plan on using up your extra summer squash, you’ve got plenty of options.

This zucchini and bean salad will be the star of any summer potluck party, thanks to a mustardy, lemony dressing that gives the vegetables even more flavor.

Raw zucchini often doesn’t get the hype it deserves. This flatbread celebrates the summer vegetable in its uncooked state by pairing it with an ultra-savory roasted garlic pesto.

For a modern take on a Caesar salad, swap out the romaine and bring in raw zucchini. A Genius substitute, if we do say so ourselves.

Carpaccio often refers to raw beef, but in this case, it’s all about zucchini. A lemony marinade, plus avocado and pistachios, make it irresistible.

A zucchini take on a Chinese smacked cucumber salad. Its dressing, with chile oil and black vinegar, comes together in the blink of an eye—and hitting vegetables with a rolling pin is pretty fun, too.

Take the best parts of stuffed zucchini (eg. panko breadcrumbs and generous amounts of Parmesan cheese) and turn it into tonight’s dinner. Pick your favorite pasta and toss it with crispy pancetta and sautéed zucchini, pistachios, and chile flakes for a family-friendly meal that everyone will love.

A fresh-as-can-be recipe that comes together in the time it takes to boil pasta. Don’t be shy with the basil or milky ricotta to dollop on top.

“This legendary pasta made of spaghetti and fried zucchini was apparently invented in 1952 by Maria Grazia, who owned a restaurant in Nerano that bears her name,” writes our contributor Emiko. “So many have tried to recreate this seemingly humble dish of pasta and local summer zucchini that it has become known as Spaghetti alla Nerano to distinguish it from any other spaghetti with zucchini.”

Is this technically pasta? Well, no. Is it totally worth making? Of course. If you don’t have a spiralizer, just use a vegetable peeler to create long, pappardelle-like noodles.

This veggie burger isn’t trying to be just like meat. It’s trying to be like zucchini and quinoa—and chickpeas and pumpkin seeds! And we think that’s a very good thing.

Who knew that, all this time, our grilled cheese sandwiches had been longing for zucchini? We didn’t. But thank goodness they’re together now—and so happy, look at them!

This spiced lentil soup features zucchini two ways—first, pureed into the soup broth, and second, sprinkled on top as an oh-so-pretty garnish.

“Khoresh kadoo, or Persian zucchini stew, is a delicious summer stew made with fresh zucchini and tomatoes,” writes recipe developer Shadi Hasanzadenemati. Serve it with lots of hot white rice.

No chorizo here! This paella is all about the vegetables—carrots, peas, green beans, artichoke hearts, red peppers, and, of course, zucchini—making it a hearty and satisfying plant-based main.

Zucchini plays a supporting, but absolutely necessary, role in this showstopping trout dish, which is served with a lemony labneh sauce.

“If you pamper this little garden diva,” writes our co-founder Amanda Hesser, “zucchini will return the favor and make a dish to remember.” This dish—with basil, mint, and honey—does just that.

First, zucchini gets charred in an extra-hot skillet and then, gleefully, gets doused in a basil-laden vinaigrette. This is wonderful next to any grilled meat or fish.

Wait, where’s the zucchini? In the meatballs. “You soften onion, garlic, tomato, and zucchini in olive oil,” writes our co-founder Merrill Stubbs, “then fold it into the meat for meatballs that are tender and juicy enough to eat all on their own.”

If it isn’t obvious yet: Zucchini loves herbs. Here, it hangs out with its old friends mint and basil—and invites another reliable buddy, walnuts, to the party.

If any recipe will make you love boiled zucchini (yes, boiled!), it’s this one—with lots of butter, dialed up with salty anchovies and spicy pepper flakes.

Tucked into a cheesy puff pastry base are zucchini stuffed with leeks, Parmesan, and breadcrumbs. They’re as delicious as they are adorable.

This rich galette—topped with white cheddar, potatoes, and caramelized onions—turns the humble zucchini into a luxurious, cheesy treat.

Ratatouille is one of those ideal late summer dishes, perfect for when you want to eat something cozy and nourishing—and stuffing it in a super flaky pie crust only makes it better. Zucchini and summer squash star in this savory pie, alongside bell peppers, eggplant, and tomatoes.

As we say goodbye to summer days, this savory pie—loaded with zucchini, fresh corn, cherry tomatoes, and green beans—is exactly what you’ll want to be eating when the leaves start to change.

We know: A lasagna without pasta doesn’t sound much like lasagna at all. However, this recipe, which substitutes zucchini for noodles, is so delicious, you’ll be willing to break a few rules.

Soufflés are one of those things that sound intimidating, but, with the right technique, are totally doable in a home kitchen. This one is made with grated zucchini and Parmesan, resulting in an extra-fluffy savory starter.

Using only eight ingredients, these cookies are super simple to make. Zucchini provides a subtly earthy dimension to these sweet bites and is enhanced by the aromatic, almost-floral lemon zest.

Always a bridesmaid, never a bride. So often a side dish, stuffed zucchini has the potential to be the star of your dinner table when paired with a hearty filling like this one made with lamb skirt steak, poblano and bell peppers, tomatoes, and fresh corn.

Involtini—which typically consist of eggplant sliced wrapped around a ricotta and Parmesan filling—are highly adaptable and (unsurprisingly) delicious when made with zucchini. These use a filling of ricotta and Swiss chard, but feel free to play around with the ingredients based on whatever seasonal produce you have on hand.

Frittatas are the perfect crowd-friendly brunch food, and this recipe is no exception. Made with both sliced zucchini and the plant’s gorgeous yellow flowers, this recipe offers a way to use both parts of the plant at once.

This zucchini gratin is full of good stuff: garlic, scallions, shallot, crème fraîche, and not one, but two cheeses.

The foundation of this Julia Child recipe is two pounds of zucchini, which get grated, salted, and squeezed into oblivion. Add some rice, onions, and cheese, and you have yourself a new favorite.

“These have no cheese and are packed with a triple threat of green things: zucchini, poblano, and tomatillos,” writes Love and Lemons. “There’s tofu in the filling…and instead of cheese on top, a lime cashew cream gets drizzled on.”

When a person is stuffed, it’s uncomfortable. But when a zucchini is stuffed, it’s delicious. These zucchinis are loaded up with a spiced freekeh pilaf, though you can substitute any similar grain, like bulgur, quinoa, or couscous.

Is it even zucchini season if you don’t make fritters? Creamy, tangy feta and a whole bunch of herbs (see: dill, parsley, and scallions) make these ones extra special.

Zucchini coins get dipped in a garlicky, herby, Parmesan-y batter, then fried until golden-brown. Sprinkle more cheese on top for good measure and serve as an app or side dish.

If you like potato pancakes, then you’ll love these zucchini ones—with parsley, lemon zest, and an optional spoonful of thick yogurt. Bonus points if you spoon more yogurt on top.

All you need for this slather-it-on-everything spread is a boatload of zucchini and a modest amount of olive oil (or butter) and shallots.

Don’t be deterred by the two cups of maple syrup. This is a unique, but extremely smart, way to use the ingredient (and your pancakes will understand).

Don’t know what to do with an overload of zucchini? Make this quick bread, which is a surefire way to use up your leftover stock. This version elevates the usual breakfast treat by adding a crackly layer of cinnamon sugar across the top.

Combining two of our favorite vegetables—carrot and zucchini—into a single quick bread makes for the ultimate breakfast or afternoon snack.

These zucchini muffins are an energizing breakfast treat: Not only are they packed with vegetables, but they also include nutrient-rich ingredients like buckwheat flour, oat flour, and walnuts.

Looks like a classic zucchini bread on the outside, is actually filled with olive oil, orange zest, and fresh rosemary on the inside.

So many zucchini recipes are as sweet and sticky as cake. This one is not. Made with all whole-wheat flour, oats, walnuts, and golden raisins, we think it’s the perfect breakfast.

Chocolate and zucchini sound like odd bedfellows, but they really love each other. This loaf gets its extra-deep flavor from both cocoa powder and chopped bittersweet chocolate.

A Tangy-Sweet Goat Cheese Frosting for All Your Favorite Bakes

Our Essential 4th of July Recipes

The Best Furniture Deals To Shop Before Prime Day Ends