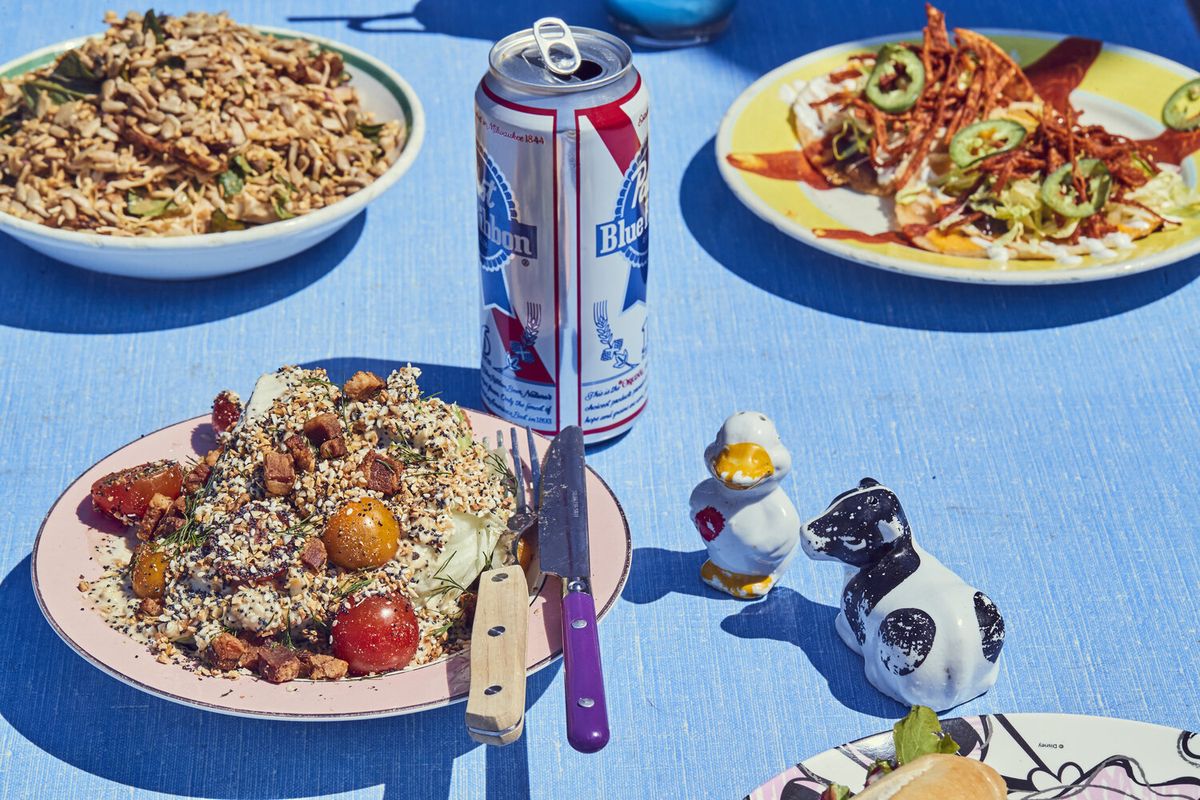 One of the first photos you’ll find inside Mason Hereford’s debut cookbook, Turkey and the Wolf, is a portrait where he’s surrounded not by his own dishes, but by a box of Cheez-Its, a crumbled bag of Doritos and a scattering of mixed Hershey’s miniatures.

What follows is a dive into what Hereford’s brother calls his “psychedelically objective imagination,” a guidebook to creating the whimsical stoner food you’ll find inside his New Orleans restaurants, Molly’s Rise and Shine and Turkey and the Wolf.

“The recipes are light-hearted, and they ditch the long route of getting things done,” Hereford said. “I’m not gonna teach you to brine and smoke a ham, but I’ll teach you to make a sandwich with ham…It’s about having a good time.”

It should be noted, however, that the cookbook itself did take the long route: Originally slated for a late spring release, the books were en route from printing when the container ship that carried them suffered a collapse at sea. The books’ fate is still unclear as the container ship undergoes an extensive dismantling process at port—but a second printing was immediately ordered, and the book is now out.

Inside, you’ll find recipes that blend both ready-made ingredients you can find at almost any corner store in America with a fearlessness at smashing them together with the care and creativity of a fine dining chef. In one, Hereford combines a box of Jiffy cornbread mix with anchovy creme fraiche and “your favorite fish eggs.”

“We didn’t make (any) dish with any less intention,” Hereford said. “We don’t change the process. We just change the tools and come up with something just as balanced or clever tasting.”

Hereford was raised in rural Virginia. When he moved to New Orleans after college, it wasn’t with any plan to become a chef. Instead, he landed a doorman gig working at a St. Charles Avenue college bar with a small kitchen in the back. He soon found himself in that kitchen, and eventually worked his way up to serving as chef de cuisine at Coquette, a repeat James Beard Award nominee.

By the time Hereford was thinking of breaking out on his own, he’d fallen in love with the industry but saw its weaknesses, too: The long hours, the bad habits and even the infatuation with getting to say something is “house-made.”

“I can’t do everything from scratch, but I can experiment, and I realized you can expand your pantry when you discover a new vegetable purveyor who’s growing something new, and if you expand that to Doritos and Pringles and Cheez-Its, that’s hilarious, and it doesn’t take less creativity,” Hereford said.

The result has given Hereford his national reputation as an unconventional kitchen wizard who displays as much energy for perfecting a bologna sandwich as he does admitting when he takes a store-bought shortcut. And that reputation is only growing, thanks to the cookbook and TV appearances on shows like Netflix’s “Iron Chef” reboot, but Hereford maintains a fraught relationship with the spotlight.

If he can admit when, say, Ocean Spray can make a better cranberry sauce than he can, why should that make him any more deserving of an accolade than the geniuses who cooked up the sauce in the first place?

“Mason doesn’t really try to hide where his success comes from. He sees himself standing on the shoulders of the people in his kitchen and in the community who have taught him and inspired him.”

“His interest in giving credit where credit is due extends from the smallest member of his team, who he may speak to a couple times a year, to a major company like Doritos,” said Will Hereford, Mason’s brother, who shot the photography for the cookbook. “Mason doesn’t really try to hide where his success comes from. … He sees himself standing on the shoulders of the people in his kitchen and in the community who have taught him and inspired him.”

Two of those people are Will’s and Mason’s parents—Robert, to whom the book is dedicated, and Amy Hereford. The Herefords raised their family in Virginia, even after the pair split, in what Will called “the world’s most loving, non-linear home.” From the very beginning, Amy could see Mason was going to figure things out his own way, and he always had strong opinions about food. Soon after the divorce, Robert took their four kids to New York on a work trip, giving each some cash for souvenirs. Mason ended up at Dean and Deluca and spent all his money on cheese.

“When he was a baby, he had two speeds: Full-steam ahead, or a dead stop,” Amy said. “He’s sort of still like that.”

There’s an intentionality and dignity to how Hereford approaches what comes out of his kitchen as much as who he lets in it, and though it filters through his own innate, absurdist humor, you can start to see where he got that when you talk to Amy.

There’s a recipe in the cookbook called Mom’s Famous Burnt Tomatoes, a version of a dish Amy still makes at every family gathering and holiday. The tomatoes were served at Robert’s mother’s home, where the family always had help in the kitchen.

“I don’t think anybody (in the family) ever learned how to cook it except for me,” Amy said. To learn it, “I hung out in the kitchen with the cooks.”

Hereford is the first to admit he didn’t come up with every recipe in his cookbook, let alone every recipe cooked up at Turkey and the Wolf or Molly’s Rise and Shine. And to him, there’s no point in ever pretending otherwise.

“Once you get past one restaurant, neither of those restaurants need me anymore. I get in where I fit in,” he said. “The people I work with are my closest friends, and it’s not weird to include your friends in something you got lucky to create.”

2 Corner Store Cocktails for When You Need a Lil' Convenience

How to Zhush Up Lobster Rolls, Summer's Favorite Sandwich