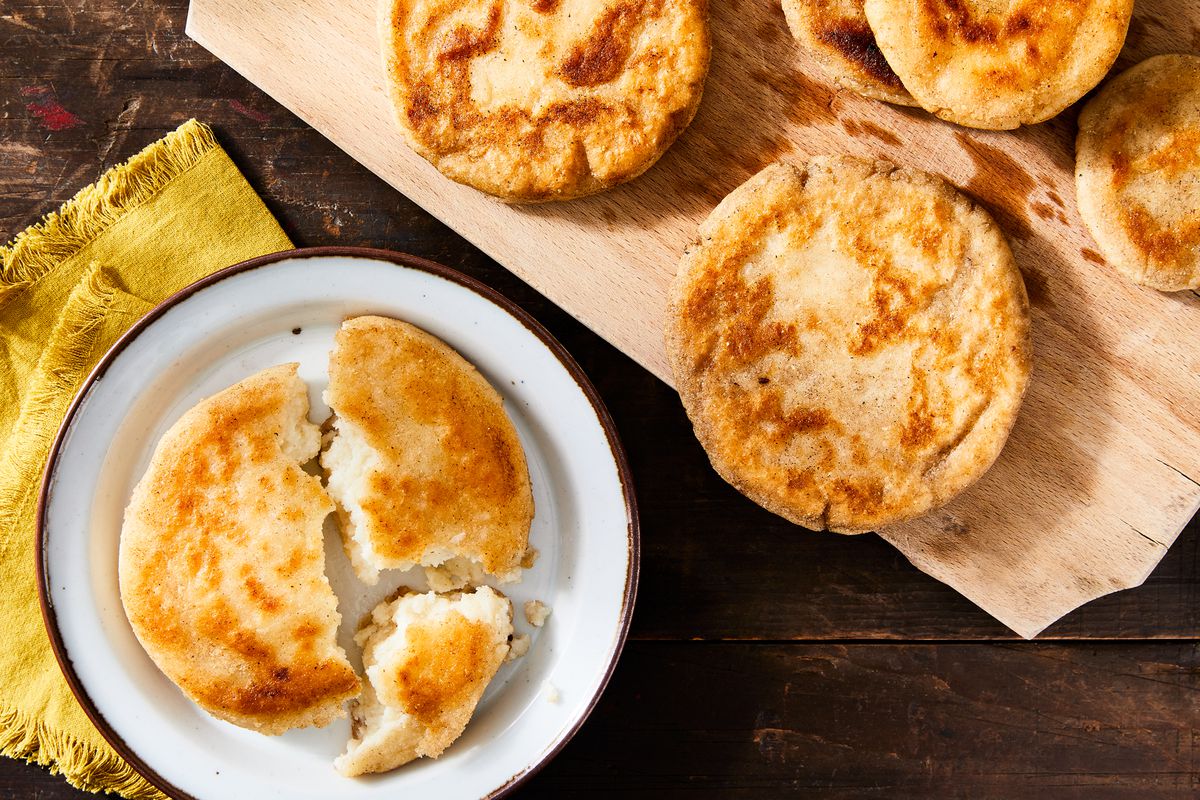 The word “arepa” did not exist to me until three years ago. My knowledge of Latin American cuisine was limited to the Mexican food of my California hometown. We’re known for the La Victoria Taquerias and their special orange sauce, but to me, the best Mexican place is a cash-only stand with picnic table seating serving classics like massive burritos, tacos, and quesadillas stuffed so full that they might as well be burritos. Growing up, I’d be hard-pressed to list foods from anywhere further south of the border.

Now, my partner and I pan-fry white cornmeal dough into little crispy disks and stuff them with salty, crumbly queso fresco and sautéed bell peppers at least twice a month for a Colombian/Venezuelan-inspired dinner.

Oddly enough, this staple meal of ours is a relic of my previous relationship. My ex’s Colombian-born mother used to make arepas for breakfast, and I discovered that the little corn pancakes happened to be just the right size for reheating in the toaster. They became an instant favorite and to this day, remain my number one comfort food.

They are my go-to when the world won’t stop spinning long enough for me to grasp the concept of filling my stomach with anything more complex.

For someone whose eating and mental health have always been inextricably linked, comfort foods are a necessity for me. It’s a point of pride to just be able to say I find certain foods comforting, a notion that has not always come easy for me. I’ve been relearning how to enjoy eating since I was eleven years old, when a mission to “eat healthy” took a dark turn and sent me to the hospital with complications related to anorexia.

In eating disorder recovery, “safe foods” are the foods that remain after you’ve villainized all the others. When you can’t bring yourself to eat anything else, these select foods will be there. As I’ve recovered, “safe” foods have evolved into comfort foods, like peanut butter and banana smoothies, cereal, and scrambled eggs for dinner. They’re for days of emptiness, days when I feel overwhelmed and anxious. They are my go-to when the world won’t stop spinning long enough for me to grasp the concept of filling my stomach with anything more complex. And now, that list includes arepas.

When my ex and I first moved in together, we both found that we were eating more consistently than we ever had. Mmonths into living together, I found myself unmotivated and apathetic. Anxiety attacks pounced on me and took over without reason or warning.

We didn’t always understand what the other needed in those days, but my partner was dependable when it came to making dinner on the days when depression left my mind blank. “Hot corn disk?” he’d ask (that’s what I had taken to calling them). “Hot corn disk,” I would reply, and we’d share a knowing smile.

Three ingredients were all we needed for the savory pancake dinner: pre-cooked white cornmeal, water, and salt. For the longest time, I wasn’t exactly sure how to recreate the arepas on my own because he made them from memory. There were no measurements. He would simply heat a small bowl of water in the microwave, mix it into a larger bowl full of cornmeal, and sprinkle in a dash of salt. After stirring it all together until it resembled the creamiest Thanksgiving mashed potatoes that were nearly liquid, he kneaded the dough and left it to rest for a few minutes. The final step was frying them until their yellowish color turned golden brown. To me, they smelled like gourmet movie theater popcorn—one of the many scents of nostalgia. Sometimes we slathered the arepas with my favorite vegan butter and fried some eggs alongside them for a more well-rounded dinner.

But no amount of comfort food, not even arepas, could fix things.

The grief that followed our seemingly inevitable breakup left no room for food in my stomach. Some days I hardly ate at all. My family feared I was relapsing, no matter how much I tried to explain that the depression made eating irrelevant at best and impossible at worst. When I did start eating again, it was purely emotional. I’d get home from my all-day partial hospitalization program and swallow the sadness down with a parade of Hershey’s dark chocolate kisses.

Two months after leaving the hospital program, I rejoined Bumble and reached out to a girl I had ghosted months before. It turned out she was in eating disorder recovery, too. We’ve been dating for a year now, and making arepas together for almost just as long.

At first, I felt awkward telling her about my comfort food. She’d had arepas in the farmers’ markets of Los Angeles, but never knew how easy they were to make at home. Of course, she was curious as to how I, a white woman with Italian and Swedish heritage, came to make this Colombian dish a part of my greatest hits list of recipes. Starting any sentence with “My ex…” early on in any relationship is a bold and potentially stupid move.

Arepas are my thing as much as they are my ex’s. He merely provided the introduction.

When you go through a breakup, there are songs you have to ban from your playlists and places you can’t pass without feeling a lump catch in your throat. We attach so many things to the memory of someone.

But when I make arepas now, the loss doesn’t hit me in the same way. Arepas are my thing as much as they are my ex’s. He merely provided the introduction. I didn’t even have to call and ask for the recipe; it’s conveniently listed on the back of the cornmeal bag.

In my previous relationship, I wanted to be anyone but myself, because to me, that was the only way I would ever be enough. When it ended, I felt I had not only lost myself, but everything. But now, I’ve reclaimed the things that are me and mine.

The silver lining was warm, round, and delicious.

What’s your go-to comfort food? Let us know in the comments below!

This Minimalist Ice Box Saved My Icy Beverages—& My Sanity