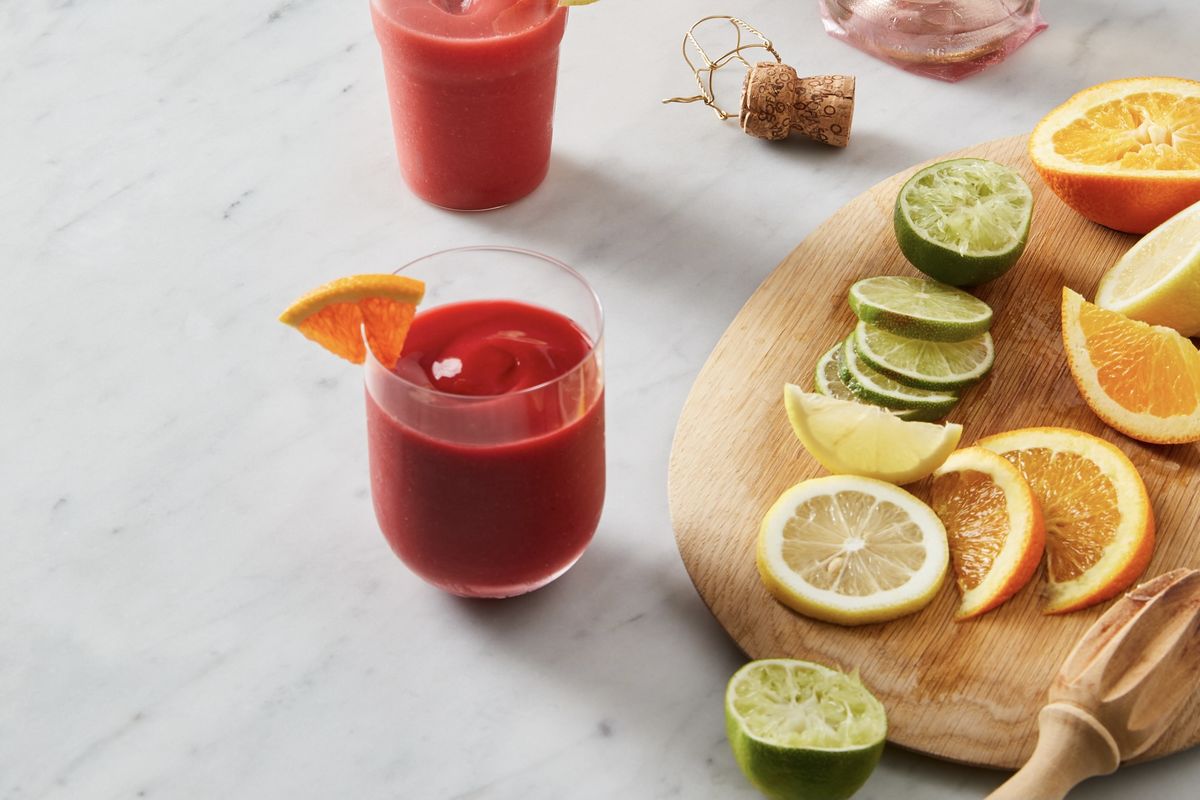 One visit to Jackson Hole, Wyoming is all it takes to discover that “sloshie” is a state of mind. The valley is filled with mountain peaks, ski resorts, rivers, wildlife, parks, and a tiny Western town with a big personality—and home to arguably the world’s most exceptional frozen beverage. While it appears to be a fruity, colorful concoction housed in a slushie machine at countless spots around the valley, it isn’t the average, barely boozy, watered-down drink associated with all-inclusive resorts and beach bars. As the name implies, it’ll get you sloshed. I learned that the hard way, many years ago, when I gulped down two sloshies in one sitting before hopping on a raft to float down the Snake River.

The sloshie was conceptualized in 2012 at Creekside Market— they filled a drink machine with freshly squeezed grapefruit juices and a sizable amount of vodka. From there, “The Hound” was born and locals still frequent this spot for a cold, tangy, frozen drink to pair with whatever outdoor adventure they’re up to. Until 2002, you could legally drink while driving in Wyoming (for passengers, until 2007), meaning locals were already accustomed to having a cold one in tow.

The sloshie reintroduced a more legal way of getting a cold drink with “legs” (to-go) and after the popularity of the Hound, pretty soon every bar, gas station, restaurant, and booze store in town was slingin’ sloshies in different flavors and sizes. Who actually came up with the name is debatable and dependent on who you ask but after consuming one, you’ll understand its name origin. In its simplest form, the sloshie is king, as it’s easy to make for the masses (juices, sweetener, and lots of alcohol) and doesn’t require a bartender’s labor.

The booze-friendly laws coupled with the serene surroundings make it a cult pastime.

Think of sloshies like an endurance sport. “While living in Jackson, I remember frequently counseling friends to think small when it came to sloshies; a 20-ounce cup (or sometimes, even larger in towns like Hoback) was a special occasion, not a default,” says former resident, Scott Eren. “Under absolutely no circumstances can you have two sloshies, particularly before a river trip—no fucking way. Not in my boat.”

“It’s Wyoming,” says Chas Marsh, co-founder of Jackson Hole Still Works. “Liquor laws are conducive to sloshies,” he adds. The amount of alcohol added is unregulated and the only open container regulation is in a vehicle—but thanks to a tamper tape seal that’s taped over the plastic cup’s lid to prevent people from drinking and driving, it’s okay to drive with (but not drink) them. It’s kind of like being in New Orleans but switching out the heat and the city streets for moderate temperatures and fresh mountain air. The booze-friendly laws coupled with the serene surroundings make it a cult pastime—especially for locals who appreciate the great outdoors and a stiff drink.

While there’s no shortage of sloshie stops, over the years, sloshie drinkers have developed an appreciation for the craft. There’s never a wrong time for a sloshie, even in the dead of winter, but the market is saturated with pre-mixed concoctions that contain lots of sugar. A tourist might not know better, but locals are well aware of where to get a quality sloshie.

On Wednesdays during warmer months, The Slow Food People’s Market is a bustling community scene for local food and produce, and yes, sloshies. “We go through 40 gallons of sloshies in three hours, or as fast as we can get them out,” says Goodman, who pops up a portable sloshie stand each week. “Creekside started with the ‘hound and we definitely pay homage to them,” says Marsh. “Our approach is to create classic or new, creative cocktails and turn those into sloshies,” he adds. “We are focused on creating a sloshie that acts as a true cocktail.”

“There are a bajillion sloshie options out there—the appeal to continue in this town is coming up with quality cocktails,” says Goodman. The popular frozen drink is a way to introduce people to Stillworks’ quality gin and vodka via the tasting room.

The consensus from locals is that the three best places to get a sloshie are Creekside, Jackson Hole Still Works, and Rations. Where you get your sloshie establishes important street cred in these neighborhoods (though I prefer Bud’s Eastside Liquor for a dessert mudslide sloshie).

Jackson Hole Still Works attracts a more off-the-beaten-path, discerning crowd. “We’re on the way to the river but we’re not directly on the road. You have to know where you’re going,” says co-founder Travis Goodman. “Our customers know what they want when they arrive,” he adds. In the summer of 2018, Marsh and Goodman joked about getting a sloshie machine at their distillery. “A week later, it paid for itself and we now sell upwards of 150 sloshies per day.

At Still Works, there are rotating taps filled with multiple options like Tiki AF, Blackberry Cobbler, Great Green Juice, and Jamaica Tea—all of which are made with fresh juices.
Locals agree: it’s truly a sport. “I don’t think I ever went on a float without a sloshie, and I’ve been on dozens of floats,” says Eren. You don’t drink them while driving, but you have a plan of where you’re drinking them before you arrive. “Between the heat, impatience, and excitement of the always takes-longer-than-it-should shuttling of cars and inflating boats before a float, I need the sloshie to make the less fun parts great—and to keep spirits high before the real adventure,” he adds.

If heading north to Grand Teton National Park, stop at Creekside. The unassuming spot plows through roughly 30 gallons or more of the ‘Hound on a summer day and it remains the largest purchaser of grapefruit in the entire state.

And on the westside in Wilson, it’s Rations, where manager Delaney Burst told me that they recently sold over 400 sloshies in one day. The most popular flavors are cantaloupe limeade and passion fruit margarita. A nod to the low- or zero-cocktail trend, Burst noted the recent addition of a non-alcoholic sloshie. “I felt like it was important to share the sloshie love with everyone, including those who don’t want to or can’t drink,” he adds.

If you find yourself in Jackson Hole, plan your sloshie accordingly. And remember: quality vs. quantity; one will get you just right. If you’re over-ambitious, sloshies can be stored in the freezer to consume at a later date.

Tell us your sloshiest stories (the good and the bad!) in the comments below!

It's Peach Season, Y'All! Here's How to Order Them Online

Our Most Popular Recipes in July