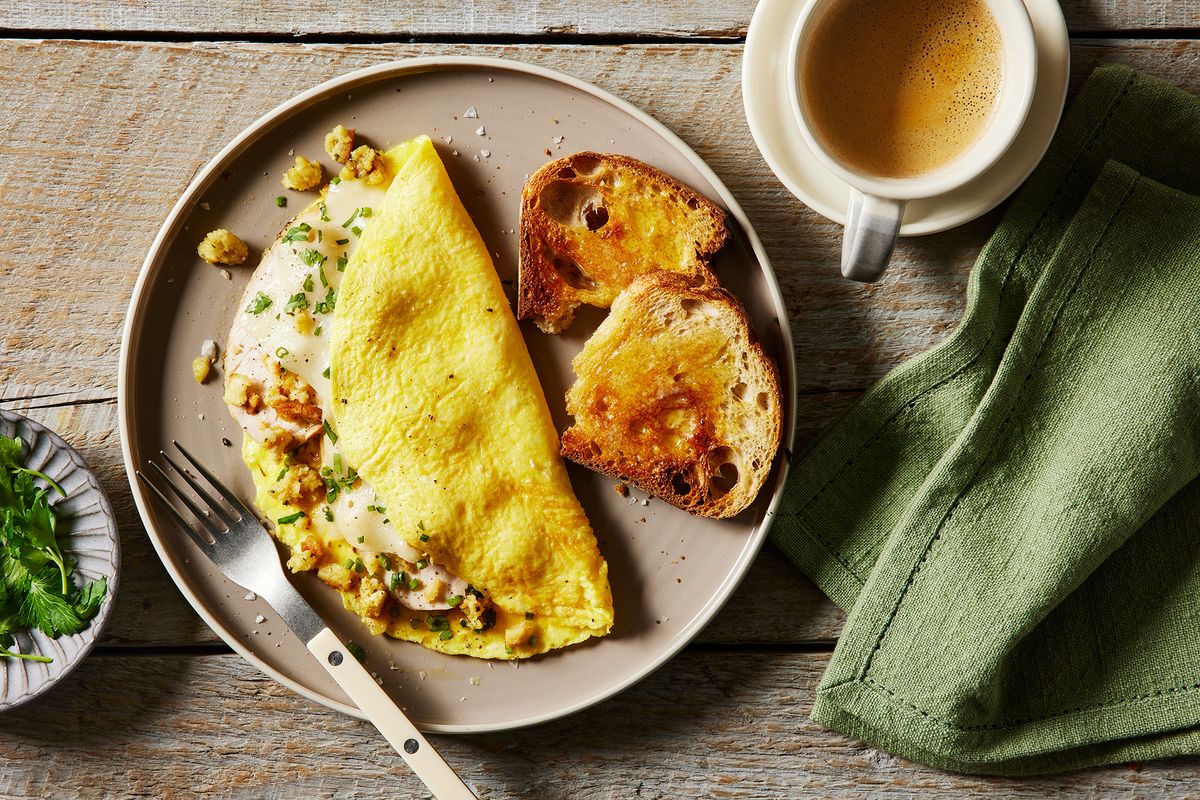 I like to think of myself as a capable home cook, but the perfect omelet remains elusive. And believe me, I’ve tried. I’ve attempted to make American diner-style omelets, much like the ones I ate in my college dining hall that came stuffed with gooey cheese, mushrooms, and spinach. I’ve followed the French techniques, cooking the eggs in a generous amount of butter until barely set. But, regardless of what I do, the omelet inevitably falls apart. What should resemble a fluffy cloud of eggs overcooks, breaks, or—in the worst cases—gets horribly stuck to the pan. What am I doing wrong? I decided to get to the bottom of this culinary mystery, once and for all.

Broadly speaking, there are two prevailing omelet styles I wanted to tackle: the French omelet and the American, or diner-style. Of course, there are countless other types of omelets in the world, from the Japanese tamagoyaki to the Spanish tortilla—but I’m focusing on the French and American styles as a starting point.

First thing’s first: How is the name of this eggy breakfast dish actually spelled? Does each spelling refer to a different version (à la macaron vs macaroon), or are they interchangeable?

The distinction comes down to geography. According to Grammarly, “omelet” is the standard American spelling of the word, while “omelette” is typically used in the United Kingdom and many other English-speaking countries. The latter is also how the word is spelled in France, the dish’s country of origin.

Is there anyone more qualified to teach the technique of a French omelet than the legendary Jacques Pépin? I began by watching a YouTube clip pulled from his show, The Complete Pépin, where the famed chef demonstrates how to make a classic French omelet (as well as a “country-style” one, reminiscent of American omelets). I know I’m not alone when I say that the video is mesmerizing—the clip has been viewed 2.3 million times, undoubtedly inspiring many breakfasts over the years.

According to Pépin, the key to nailing a French omelet is getting the curds as small as possible, which will yield a creamy (rather than fluffy) texture. To do so, the eggs must be stirred and moved as vigorously as possible upon hitting the hot, buttered skillet until just the exterior is just barely set. Then, the still-soft curds are pooled towards one side of the skillet and the omelet is folded and gently inverted onto a plate. The eggs shouldn’t have any signs of browning—instead, the omelet should be pale yellow in color and have a soft, silky interior.

To learn about perfecting the American-style omelet, I turned to none other than food science expert J. Kenji Lopez-Alt, who wrote about the topic for Serious Eats. In contrast to a French omelet, fluffy American omelets are all about keeping the eggs in large curds—and as a result, minimal stirring is best. This can be achieved using the “lift-and-tilt” method. “Use a silicone spatula to lift up the edges of the [omelet] and push them toward the center of the pan, while tilting the pan to allow the raw egg to run underneath,” writes Lopez-Alt.

Additionally, it’s important to start the eggs in a pan of hot butter over high heat. Doing so, along with minimally agitating the eggs, will encourage the exterior of the omelet to brown, a key element of this type of omelet.

Once the eggs are almost completely set, Lopez-Alt suggests you take the skillet off the heat, add your toppings (the diner-style omelet is particularly well-suited for add-ins and fillings because the large curd lends a sturdier texture), and cover. The residual heat will cook any lingering underdone egg, melt the cheese, and warm up the other additions. It’s at that point that the omelet is ready to be folded and served.

Because French omelets are all about the simplicity of a well-cooked egg, other inclusions are minimal. A handful of freshly chopped herbs is a common addition, and cheese—whether a classic Gruyère or Ludo Lefebvre’s Boursin twist—added right before the omelet is folded, is also acceptable.

American omelets, in contrast, are a format that allows fillings and experimental flavor combinations to shine. The beloved Western (or Denver) omelet, with its filling of diced ham, onions, bell peppers, and cheese, is a perfect example of this style. Other classic omelet additions might include mushrooms, spinach, tomatoes, chiles, meat, avocado, and/or broccoli—but that’s only a start. Just make sure any components that need to be cooked (like onions, meat, tougher vegetables, etc.) are done so in advance, lest you end up with raw vegetables in your otherwise-perfect pile of eggs.

How do you like your omelets? Let us know in the comments!

13 Cozy Throw Blankets of 2022 to Ward Off Chilly Nights

The Healing Powers of My Grandma's Macaroni Salad

A Low-Pressure Guide to Using a Pressure Cooker