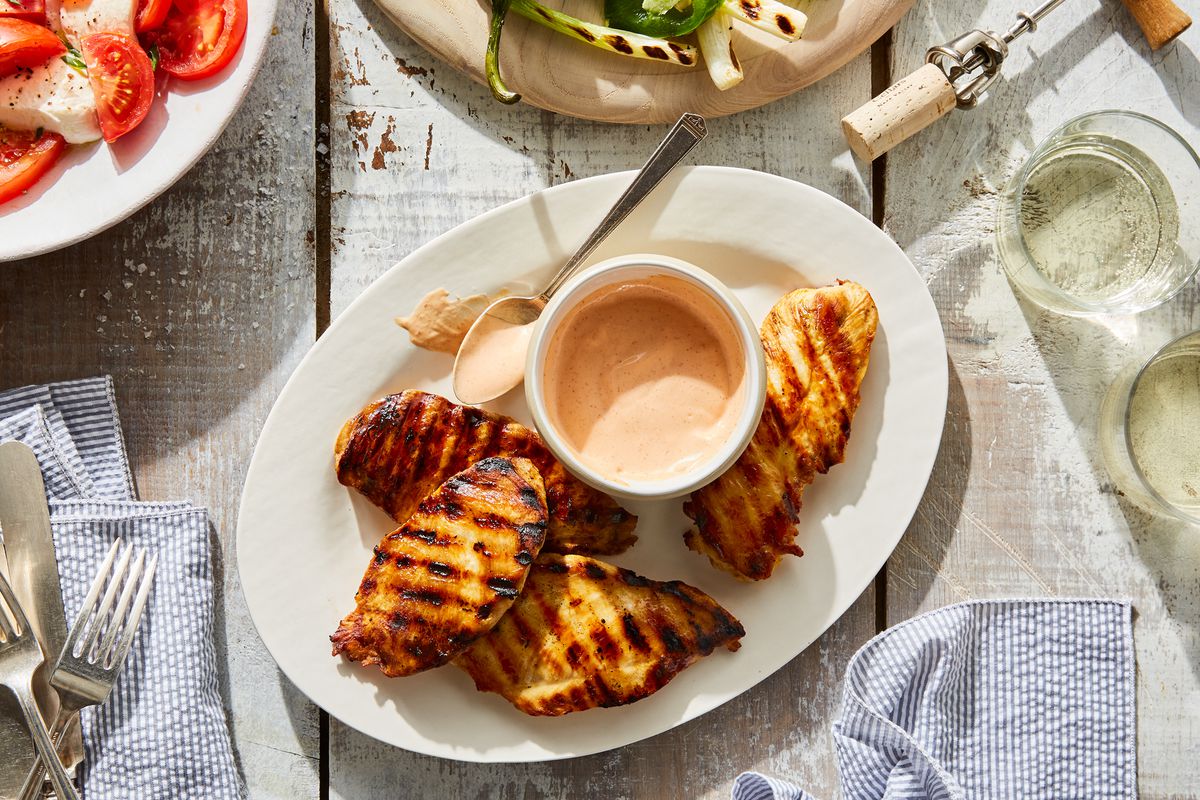 We’ve reached the time of year when we’re making every excuse to spend time outside and away from hot kitchens. In my family, summer dinners often revolve around grilled chicken thighs marinated in a combination of herbs, lemon juice, and olive oil. Grilled chicken is a great way to feed family and friends something nourishing (and delicious!) without spending too much time hovering over a hot stove, which we’re all about.

Out with the bland chicken of your nightmares, and in with juicy, flavorful breasts and thighs. From the best cuts to buy for summer grilling to marinade recommendations to how to make sure your chicken is actually done, here are your best tips for grilling chicken.

On the other hand, chicken breasts aren’t as fatty as other cuts, which means they tend to dry out quickly. If you have your heart set on serving chicken breasts, look for small cuts (under 10 ounces each); they’ll cook faster and thus retain more moisture than larger pieces.

As for grilling whole chickens, spatchcocking, or removing the chicken’s backbone so that it lays flat, will allow the chicken to rest flush with the grate, yielding a tender, juicy bird. (A butcher can spatchcock your chicken for you if you’d rather not do it yourself!) If you’re thinking about grilling a whole chicken without spatchcocking, think again; it’s difficult to cook evenly and not worth the inevitable frustration.

“It’s important to have a hot area and a cooler area on the grill,” says Stephanie Lupaczyk, also of Formaggio Kitchen. Also known as a direct zone and an indirect zone, this setup enables you to cook meat properly; the direct zone is hot for searing and cooking things quickly, while the indirect area is cooler in order to cook large cuts of meat (like a whole spatchcocked bird) the rest of the way through—no scorching involved. If you’re working with charcoal, leave an area without coals on the grate, and if you’re working with gas, keep a burner turned off.

On a gas grill, preheating is as easy as pressing a button or turning a dial, then waiting 10 to 15 minutes. It’s a little more complicated on a charcoal grill; once you’ve arranged layers of newspaper and charcoal and lit them, it’ll take about 15 to 20 minutes for the grill to get nice and hot. Click here for more in-depth instructions on lighting a charcoal grill. Allard remarks that choosing between charcoal and gas depends on your preferences. “Gas grills are easier to get started, but charcoal grills add much more flavor,” she explains.

While the grill is heating up, use a damp grill brush to clean the grates thoroughly, ridding them of any food particles and bacteria. If you don’t have a grill brush, you can also use tongs to rub a crumpled ball of aluminum foil against the grates; the friction between the foil and grates will remove even the stickiest bits of food. It’s helpful to scrub the grates while the grill is preheating because the warm surface helps release grime.

Even if your grill looks slick, we’d recommend brushing it with high-heat cooking oil like vegetable oil or grapeseed oil to ensure that nothing sticks. The easiest way to do this is by spritzing the grill with oil so that it has a light, even coating. This step is especially important if you’re grilling skin-on chicken, as “chicken skin tends to stick to the grill if you’re not careful,” Lupaczyk notes.

Get yourself some long, sturdy tongs, an instant-read thermometer, and a timer for grilling chicken this summer. Allard recommends ThermoPop by ThermoWorks.

While it’s not entirely necessary to marinate chicken, you absolutely should season it with salt up to 3 days in advance. Allard suggests using about 1 teaspoon of kosher salt per pound of meat (so 1 teaspoon of salt for a pound of chicken breasts or thighs, and about 5 teaspoons of salt for a whole 5-pound chicken). It may seem like a lot of salt, but trust us when we say it’ll pay off.

Not only will salt give the chicken plenty of flavor, but it’ll also tenderize the flesh. Furthermore, the salt helps you get that irresistible, crackly chicken skin you crave.

If you do want to marinate your chicken, try this saffron-yogurt marinade, an Alabama white barbecue sauce, or this tangy lime glaze.

It’s tough to say exactly how long to cook chicken breasts and thighs, since it totally depends on their size, whether they have skin on or bones in, and the type of grill you’re using. Consider this a general rule of thumb, but tweak it based on the cuts of chicken and grilling equipment that you’re working with:

Grill a spatchocked chicken for best results, and note that the timing will change depending on the size of the bird.

With time, you may learn to tell when chicken is done just by touch, but the safest way to check the doneness of any cut of meat is to use an instant-read thermometer. Chicken is done when the thickest part of the flesh reads 165℉. Resting the meat allows the juices to redistribute and settle. You’ll be rewarded for your patience, since resting yields a “much more tender bird,” insists Lupaczyk.

Share your best grilling tips in the comments below!

This 5-Minute Tomato Sauce Has a Secret Star

There Are SO Many KitchenAid Stand Mixers—How Do I Choose?!