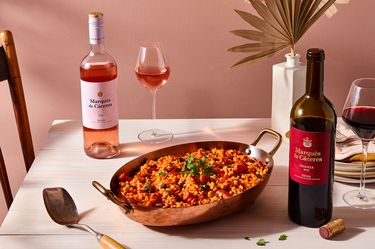 We’ve teamed up with Marqués de Cáceres to curate the perfect sips and snacks for a Spanish-themed Sunday, whether you’re actually there or just in a European state of mind. From velvety, rich Rioja Reserva to crisp, bubbly Cava, their range of award-winning wines will help get the tapas party started.

In Spain, Sundays are sacred. Save for a few restaurants and bars, pretty much everything is closed, so instead of running errands or grocery shopping for the week, people are left with two options: spend the day at home or spend the day out with friends. Both activities usually involve eating, drinking, or both at the same time—to enjoy a Sunday to its fullest even has its own verb in Spanish, dominguear.

When I lived in Barcelona, my favorite Sunday activity was to meet friends on a terraza to enjoy some snacks and a glass of cava or a vermut, vermouth dressed with an olive and a slice of orange. If I was really, really lucky, a friend might invite me over to their house for paella—the Sunday-afternoon holy grail. Regardless of setting, the sentiment remains the same, savoring the twilight of the weekend as a new week dawns. To help you dominguear as best you can, I’ve pulled together a list of my three favorite wines from Marqués de Cáceres, an award-winning, family-run winery led by owner Cristina Forner and based in Rioja.

The Forner family has been active in the wine industry across Spain and France since the early 20th century. Five generations of Forners have learned and perfected the wine trade, so it should come as no surprise that when they finally opened their own family label, Marqués de Cáceres, it was a booming success. Since the 1970s, the family has made and internationally exported top-quality Spanish wines, so even if you can’t make it to Barcelona for a relaxing Sunday afternoon, a bottle (or three) of Marqués de Cáceres can help you dominguear on your own.

Cava is like prosecco’s drier cousin and is made using the same fermentation method as French Champagne. Marqués de Cáceres Cava, like most of the cava in Spain, hails from the Catalonia region and is light and crisp on the palate, which makes it my choice for kicking off a Sunday gathering. With cava’s crisp, zingy profile it’s time for some classic Spanish bites that match its energy: ham croquettes and a crunchy salad with a bold, punchy vinaigrette.

After the bubbly, it’s time to graduate to something a bit bolder, but still refreshing nonetheless. Enter: Marqués de Cáceres Rosé, from the Rioja region. This luminous, coral-pink wine is made from Tempranillo and Grenache grapes but isn’t aged in a barrel, which ensures the flavor stays springy, bright, fresh, and vivacious. As your domingo carries on, enjoy your rosé with a few different tapas that involve a touch more nuance, like a warm potato salad flecked with chorizo or a chilled salmorejo soup (like gazpacho, only better). Now would also be a good time for a bite of Spanish tortilla.

Finish on a high note, because the biggest dishes deserve the boldest pairings. With delicate notes of spice and juicy red fruits, this Marqués de Cáceres is made from Tempranillo grapes that are grown in chalky soil and aged for a year in oak barrels. Consider attempting a paella, the crown jewel of any Spanish Sunday well spent. Don’t be intimidated: With some guidance, paella isn’t tough to master. Below are some options whether you prefer meat or seafood—just omit the meat if it’s a vegetarian version you’re after. At this point, you’re probably full, and this Crianza is the perfect wine to sip as the sun sets on another week.

What are your favorite Spanish snacks? Tell us in the comments!

Our friends at Marqués de Cáceres have been producing fine Spanish wines for decades, and it’s been a family affair all along. Five generations of Forners have finessed the winemaking process for luscious Rioja Crianza, vibrant Verdejo, and more traditional wines from the heart of the Rioja, Rueda, and Ribera del Duero regions of Spain. Learn more about the wines and where to find ’em here.

17 Seasonal Buys to Transform Your Space Into a Winter Wonderland

5 Less-Expensive Places to Get Custom Furniture

31 Best Butternut Squash Recipes for All the Fall Feels