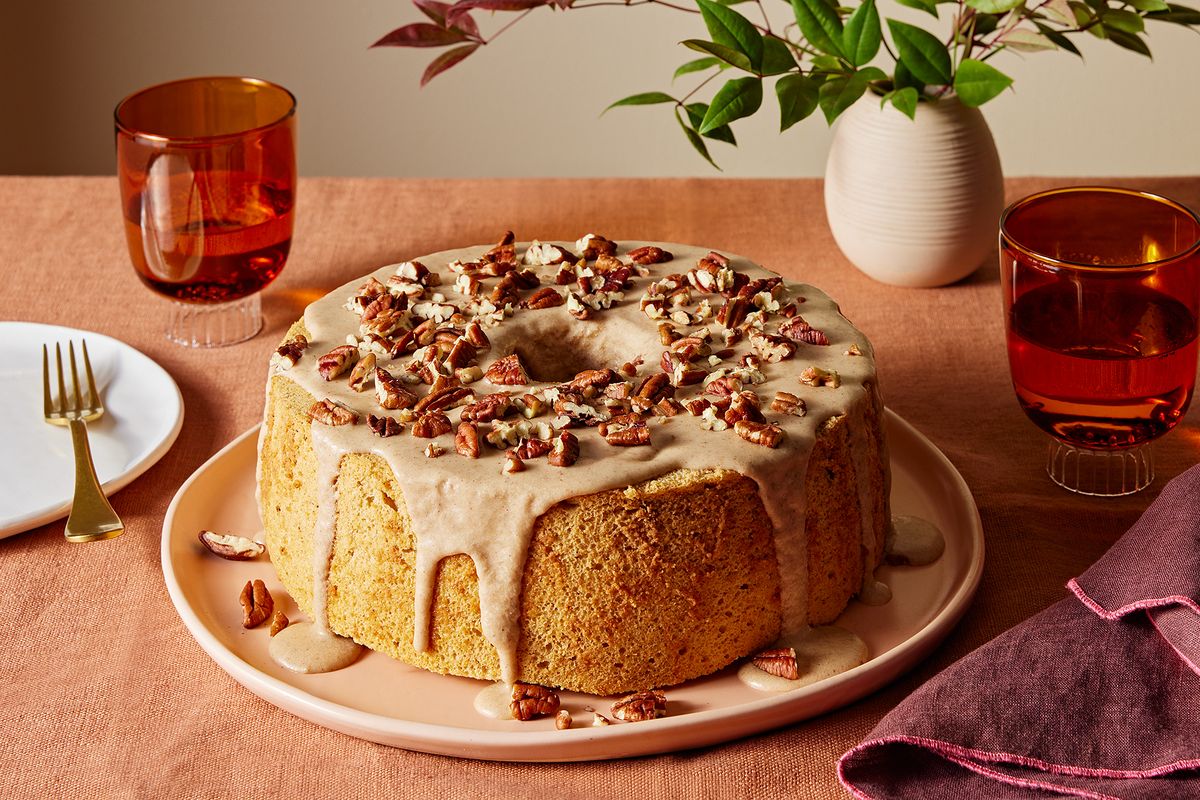 I wasn’t used to the kind of date where you’d bake something together. I was used to being taken out to bars that smelled like hops and bleach and you had to yell to be heard over the music. I’d come of age at a college obsessed with fraternities and then moved to New York City just as Tinder exploded, both of which gave me the sense that dating happened exclusively at bars and parties. So when I moved to Virginia in my late twenties and a guy named Ben invited me out on a series of dates that felt too good to be true—a sunset walk, dinner at his house, and then, after those improbable first two dates, suggested we make a pumpkin angel food cake together—I assumed he must be joking.

Forget the fact that I thought dates should involve late nights and at least one kind of alcohol. I couldn’t understand why anyone would want to make an angel food cake. The ones I’d experienced came from a grocery bakery or a box mix. They were sticky and spongy, their texture a sweet cakey facsimile of a marshmallow.

Made with whipped egg whites held together with a bit of flour and sugar, angel food cake is naturally fat-free, which made it the holy grail of 90s health foods when we decided to hate fat and love added sugar.

For many people, an evening spent baking might sound calm and knowable. To me, this represented the utter wild.

And if it wasn’t just about dieting—it was about easy baking, too. I remembered watching Sandra Lee on Semi-Homemade Cooking take a store-bought angel food cake, fill the center with pie filling, ice the outside, and place it in the center of a table. To me, angel food cake was a dessert that was always about compromise—the appearance of homemade without the fuss, the pleasure of eating dessert without the “guilt”. I just didn’t get the appeal. But I said yes to the cake and yes to the date, the way you say yes when you’re getting to know someone.

For many people, an evening spent baking might sound calm and knowable. To me, this represented the utter wild. I’d gone on dates that took me to the tops of the aqueducts in Segovia, to parties hosted on Jackson Pollock’s old island property, to singing karaoke with strangers at two in the morning. I knew what to do in those situations. But sliding a butter knife across a cup of flour, talking while the cake baked, being quiet and still? That felt scary.

That night at Ben’s house, he showed me the recipe he’d printed out, and the can of Libby’s pumpkin puree he’d purchased. The idea of him making a plan and thinking of me while at the grocery store on a Sunday morning was almost too much. The way I was beginning to fit into his life, even when we weren’t together, felt big. We talked about the recipe and then we just got to talking and talking and talking. We didn’t make the cake that night, after all, but I filed away his love for angel food cake into the collection of things I was starting to remember about him.

I’d never wanted to nourish someone that way, give them my time and consideration. This was a new feeling. And a new recipe.

Three months later, on a cold December day, we bought a tree together and decorated it with strands of popcorn and gumdrops. We spent hours talking on his carpeted living room floor. He made me salmon with crispy skin—a dish he’d been working on perfecting—and chicken patties with macaroni and cheese—something he’d survived on in college.

We were still newly dating and it felt difficult to get the balance of Christmas gifting right. Too much would feel like overkill; too little might imply I didn’t care. I decided something homemade would split the difference and that’s when it hit me: I should make him an angel food cake. It was one of the first times I’d really cooked something for someone else. I’d made pizzas with store-bought crusts or chopped vegetables as the sous chef to a boyfriend before, but I’d never taken the lead. I’d never wanted to nourish someone that way, give them my time and consideration. This was a new feeling. And a new recipe.

If I couldn’t quite figure out the feelings behind this idea, I knew I could figure out how to execute it, even if it was very out of season. I bought a tube pan and set about learning. I sifted flour and sugar and beat the eggs to exactly the right level of stiffness. I folded confectioners’ sugar into clouds of egg whites and macerated berries shipped in from Mexico while watching a video of Claire Saffitz baking her recipe in the heart of the summer.

While baking angel food cake isn’t difficult, it’s not exactly easy either. You have to make a glossy meringue, smooth out air bubbles before baking, let it cool upside down, and loosen the hollow neck of the tube from the middle of the cake without breaking it. After working at it for three hours, I turned the cake out onto a plate. I was proud of it, but it still looked like the cakes I’d grown up avoiding and I wasn’t too excited to eat it.

Later that day when we exchanged gifts, I left Ben in the living room while I went into the kitchen and cut us slices of cake. As I spooned the purple juice from the berries across the bright white cake, leaving a pile of blueberries and raspberries at one end, I prayed I’d done a good job. He took a bite and so did I. It wasn’t anything like what I remembered. It was airy, slightly springy, just sweet enough. The berries cut across everything with a sharpness that lurked below their sweetness. Sliding my knife through the slice met just a bit of resistance before gliding the rest of the way through. I could finally grasp why it had been his favorite.

“It’s the best angel food cake I’ve ever tasted,” he told me. The world felt shimmery and exciting. Two days later, I told him I loved him for the first time in his living room.

Since we never actually got to make the pumpkin angel food cake together on our early date, I created this recipe for him. I don’t know if it’s exactly like the one he’d imagined on that early date—the printout has been lost to time and a cross-country move. In my version, the cup of pumpkin purée makes the cake slightly moister than a traditional angel food cake in a way that I love. A salted maple glaze replaces out-of-season berries for a not-too-sweet, sticky topping, and chopped walnuts on top add crunch.

Soju Is the Refreshing Summer Drink You've Been Waiting For

Our 35 Best Eggplant Recipes of All Time