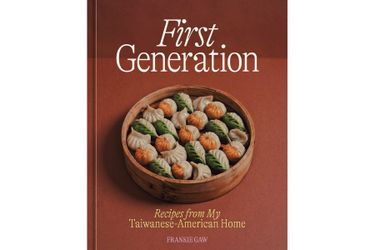 Heads up: Food52 earns an affiliate commission on qualifying purchases of the products we link to.

We had the pleasure of chatting with Frankie Gaw, the Seattle-based food writer and photographer known for his blog, Little Fat Boy. His first book, First Generation: Recipes From My Taiwanese-American Home, came out in October 2022 and delighted readers with its nostalgic recipes, playful visuals, and unexpected flavor and ingredient pairings (lap cheong corn dogs, anyone?).

How did the process of creating the book compare to the writing and work you do for your blog, Little Fat Boy?

I’m very much an introvert, and it takes a while for me to open up about my personal life. Even though I was writing a blog about Asian American food, I felt like I could kind of get away with talking about it at a surface level. I could be like, “Oh yeah, this stew is from my grandma,” or, “This is something I ate as a kid,” but I never had to dive into any of the details of what it was like to be that kid.

In the beginning, I thought I could just extend my blog voice and bring it into a book. Reading some of the early drafts, my friends were like, “This doesn’t sound like you at all. Your personality isn’t there. Your story isn’t there.” It was a really good wake up call—I had to ask myself, why am I writing this book? I wanted to see what I hadn’t seen as a kid, which was a book that was around the Asian American immigrant experience. It always felt like you could only have an Asian cookbook if you were a historical expert or had a deep, deep knowledge of the culture. I thought it would just be so cool to come at it from the very personal, unique perspective of an individual or a family.

I had to dive deep into my own personal experiences and identity and understand what it means for me to be Asian American—the things I’m proud of, but also the shame I was struggling with.

How does it feel to have done such a personal project that required so much vulnerability?

I feel somewhat scared [laughs]. Some of this stuff I’ve never even expressed to my family or friends, especially because the cookbook was such an isolated project. I worked on it a lot during the pandemic, and I wrote and shot the whole thing in my house. It felt like my own personal project that wasn’t going to be seen by the world. So, I think I was a little bit hesitant when I finished—I put a lot of myself in this book. But I also feel very proud, because I accomplished the goal that I set for myself at the beginning, which was to represent a group of people that I felt hadn’t really been represented in cookbooks or in food media in the past. It was this idea of celebrating third culture kids, people who always kind of felt between two cultures and are still trying to figure it out. I felt like the book really captured a moment in time for me, of validating and making worthy this feeling of not belonging, or this feeling of trying to understand your identity through food.

I always ask myself a question: “Does this idea remind me of something in my past? Does it give me a sense of nostalgia or sentimentality?” The recipes have to pass that question.

I wanted to have a range of recipes that represented my traditional Taiwanese background—staple recipes that were untouched by my American culture, which I grew up eating around the family table or saw my grandma making. I’m thinking of steamed pork buns, classic pork dumplings, or the whole steamed fish that my family and a lot of other Asian immigrant families make around the holidays. From there, I wanted to integrate some of my Midwestern and American culture into the recipes. There’s a recipe that’s in the book that’s a Chinese sausage that’s made into a corn dog. My mom would buy giant boxes of Costco corn dogs and keep them in the freezer, and I have a distinct memory of eating them after school every day. I would just sit myself in front of the TV, watch “Maury,” and eat this corndog. That was my life for two or three years. Those are the kinds of distinct and funny memories that I wanted to pull from.

In my past life I was designing mobile apps. I used to work at Facebook, then at a couple startups, and I was at Airbnb right before I wrote the cookbook. With the book, I viewed it as a product in the sense that I wanted to tell a story not just through the recipes, but through the photography, design, and styling.

When we were pulling together the design mood boards, we looked at a lot of books from Fu Pei-mei—she was like the Julia Child of Taiwan for my parents’ generation, and she was one of the first people to create an Asian cookbook in the ‘50s or ‘60s that had English translations. I wanted to reference elements from her books. First Generation is very much an intergenerational narrative, and I wanted to use the design, the book itself, and the way it was presented to tell that story too. I wanted it to feel referential to that time period, to pay homage to my family.

Are there any recipes from the book that you’ve found yourself returning to that maybe surprised you?

There’s a whole roasted chicken recipe in the book that I always go back to. I love it because it’s a great group meal, but it’s also pretty low maintenance. You create a salt water brine that’s blended with ginger and scallions, marinate the whole chicken in it overnight, stuff a bunch more scallions and ginger in it, and then you roast it until it’s golden brown. Then you make a honey and chile crisp butter sauce that you pour over the whole thing. It reminds me of Ina Garten, but then the flavors and aromas are very much my grandma’s.

What’s next for you?

I have a bucket list of dream goals. I’d love to start my own direct-to-consumer frozen dumpling line—that’s my big project that I’d love to figure out in the next year. I would potentially consider a second book. I’ve always wanted to extend what I’ve done for myself to other people or brands. I think I have a unique background in the sense that I know how the cookbook and food worlds work, but I also love design and I love storytelling. So if I can help other POC-owned brands, or other cookbook authors who might not feel like they’ve been represented before and help them tell their story, I’d love to help scale what I’ve done for myself for other people as well.