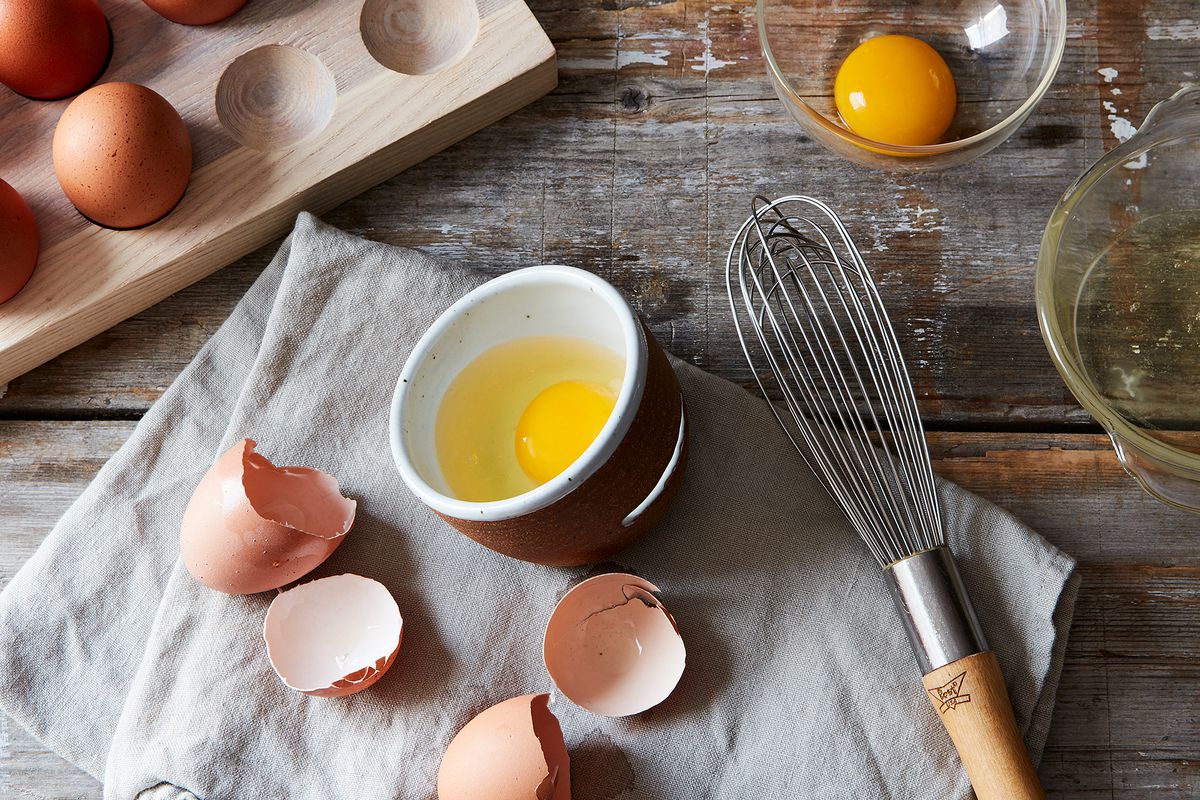 If you speak French, oeufs-mayo holds no secrets for you: This portmanteau of an appetizer is no more complicated than uniting hard-boiled eggs and mayonnaise— the former halved, the latter dolloped generously on top.

“I always think of the traditional dish with the egg cut in half, from top to bottom, with the yolk on the plate and the mayo coating the white of the egg,” says author Dorie Greenspan. “But when I was at Le Paul Bert, it was upside down. I asked somebody why, and they said, ‘Because the yolk sticks to the plate!’”

Her evocation of the restaurant famed for its adherence to tradition is no accident: Indeed, though almost criminally simple, egg-mayo is a stalwart bistro staple, a dish Paris-based food writer and stylist Rebekah Peppler says she’s “seen eaten more out than in.” “Oeuf-mayo is a bistro dish,” agrees French culinary journalist Emmanuel Rubin, “not a home dish.” To wit, the iteration from Paris’ Bouillon Pigalle is France’s most-ordered dish on Deliveroo (a British online food delivery company)—and the fifth most-ordered dish in the world.

According to Priscilla Martel, the former chef-owner of French Restaurant Du Village in Chester, Connecticut, oeufs-mayo often appears as part of a larger whole known as hors d’oeuvres variés, a hodgepodge of appetizers including grated carrot salad, celery root with remoulade sauce, or cubed beets in a light vinaigrette.“The one at the Colombe d’or will make you cry,” she says. “They wheel it over like a cheese cart.” But if the bags of shredded carrots sold at my local Monoprix are any indication, French home cooks are adept at making carottes râpées. Oeufs-mayo, meanwhile, despite its simplicity, seems relegated solely to bistros.

In my fifteen years of living in France, I’ve been ensconced in several French families, but never once have I been served the stalwart combination of hard-boiled egg and mayonnaise. Greenspan posits that perhaps the French think it too simple for guests; to confirm, I called my former neighbor, the septuagenarian Régine Pla, with whom I am close enough to regularly (happily) dine on leftovers. She asserts that she’s never served me oeuf-mayo, not because it’s too simple for guests, but because she never makes it at all. While her dinner party menus regularly feature oeufs mimosa—deviled eggs stuffed with tuna and mayonnaise, garnished with the crumbled yolk—oeuf-mayo sits in a strange interstitial space: too simple for company, too involved to make just for herself.

A bistro stalwart, oeuf-mayo remains in large part thanks to its low price point: just €1.90 for a serving of three egg halves at Bouillon Pigalle, and 90 cents at Le Voltaire for one egg, halved. But the cheap-as-chips appeal of the dish is waning, following the fine-dining leanings the bistro underwent during the rise of bistronomie in the 1980s and 90s. It was in 1990 that Claude Lebey founded the Association de Sauvegarde de L’oeuf Mayonnaise to promote and protect the staple; Chef Chris Edwards is the most recent vice-champion of the contest held every year, rewarding the best version of the dish according to the association’s official charter: large chicken eggs, hard-boiled and no longer runny, served with a simple, seasonal vegetable garnish (if desired) enough mayonnaise to mop up the excess with bread. “For me, it’s like I’m integrating a little bit into French culture,” says the Australian chef, who has lived in France for five years, of his silver medal. “It was an affirmation that I’ve actually been able to be part of it.”

He’s baffled that more people don’t make oeuf-mayo at home, especially seeing as it’s becoming tougher to come by in restaurants and bistros. On one recent jaunt through Paris, seized by a craving, he walked for half an hour, searching menus in vain. “They still had poireaux vinaigrette, but I didn’t see egg mayonnaise!”
The few he does find frequently fetch around seven euros for two halves—all the more reason for people to make it at home.

But while the simplicity of the dish is part of its appeal, it may also be its downfall, at least for the home cook.

“It actually makes it harder to do something so simple so well,” says Edwards, “because there’s nothing to hide.”

“With so few components,” agrees Peppler, “you have to get every single one of them—from mayo to egg to seasoning to presentation—just right.”

For Peppler, “just right” starts with a seven-minute egg: The yolk should be jammy and the white firm but never rubbery.

“I can’t say I’ve never started them in cold water at the end of a long day and hoped for the best,” she says, “but if I want to have full control, I bring the water to a boil and lower them in with a slotted spoon.”
Edwards starts in hot-but-not-quite-boiling water to keep the shells from cracking, cooking for eight minutes and 40 seconds, precisely, before transferring them to an ice bath to stop the cooking process.
To peel her eggs, Martel relies on a technique gleaned from Jacques Pepin.“You drain them, but they’re still warm, and you just shake that pan really vigorously, and all of the shells kind of crack and become a little cracked skin, and they slide right out.”

As for the mayonnaise, it must be bien sûr made from scratch.

Martel has tried many different methods, from blending in a Vitamix to a food processor. The key, she says, is looking for a visual clue—something she acquiesces is tougher for home cooks who “didn’t grow up making mayonnaise with a wooden spoon, like grandma taught you.” (Of course, if Grand-mère taught you to make mayonnaise in France, she may have also shared that there are a few days a month that you shouldn’t: One pervasive myth in France dictates that a menstruating woman’s mayonnaise will be cursed to split, something that Elise Thiébaut, author of Ceci est mon sang, calls one of a “great number of superstitions connecting eggs and menstruation.”)

But mayonnaise is not actually that difficult to master—whether you’re menstruating or not.

“People are scared,” Edwards says, notably of mayonnaise splitting. “But you can always fix it if you’ve got more eggs!”Making a new emulsion of egg yolk and mustard and whisking the broken mayo into it, he says, will make it good as new.
The ideal mayo, according to Greenspan, should be “well-seasoned” and thick.
“The mayo needs to be thin enough so that it just coats the egg,” she says, “and then when you slice it, the mayo kind of drips down that slice.”

For his recipe, Edwards uses “a lot of mustard,” and, in a traditional move that nevertheless runs contrary to what many believe about the French, good-quality sunflower oil rather than olive oil for a neutral flavor.
Once you’ve got the basics down, though, Greenspan notes that oeuf-mayo is “just made to be played with.”

“Once you learn how to make the mayonnaise, and once you get the eggs just the way you want them, you can just go crazy with it!”

She occasionally seasons her mayonnaise with sesame oil and rice vinegar, scattering the eggs with sesame seeds; Edwards infuses the oil for his mayo with smoked morteau sausage; Peppler’s version sees bright green, garlicky persillade stirred right into the sauce.

“It’s above all the incarnation of a paradox that, today, fuels our food culture,” says Rubin, “one of those very working-class dishes that has taken a turn for the chic.”
But oeuf-mayo is perhaps best when at its simplest: a free-range egg coated with mayonnaise and garnished with herbs—Greenspan is partial to chives or chervil. Pushing it too far denatures it, as Edwards saw in the very rules of the contest. “Some people rocked up and they had an ostrich egg,” he says. “Immediately, they were disqualified.”

At its best, it’s a dish that fuels nostalgia—even for someone who didn’t grow up on it. “I feel like that first bite of egg mayonnaise kind of prepares you for the next one,” asserts Greenspan. “You kind of know the dish. Unless you start playing with it, the classic dish is knowable in that first bite.”

Have you ever made oeuf-mayo or gotten to try it at a French bistro? Let us know in the comments below!

Use Your Garden Bounty to Make Green Tomato Crumb Cake

How to Improvise a Cocktail, Rick Martinez Style

Summer Is All About Pork Ribs