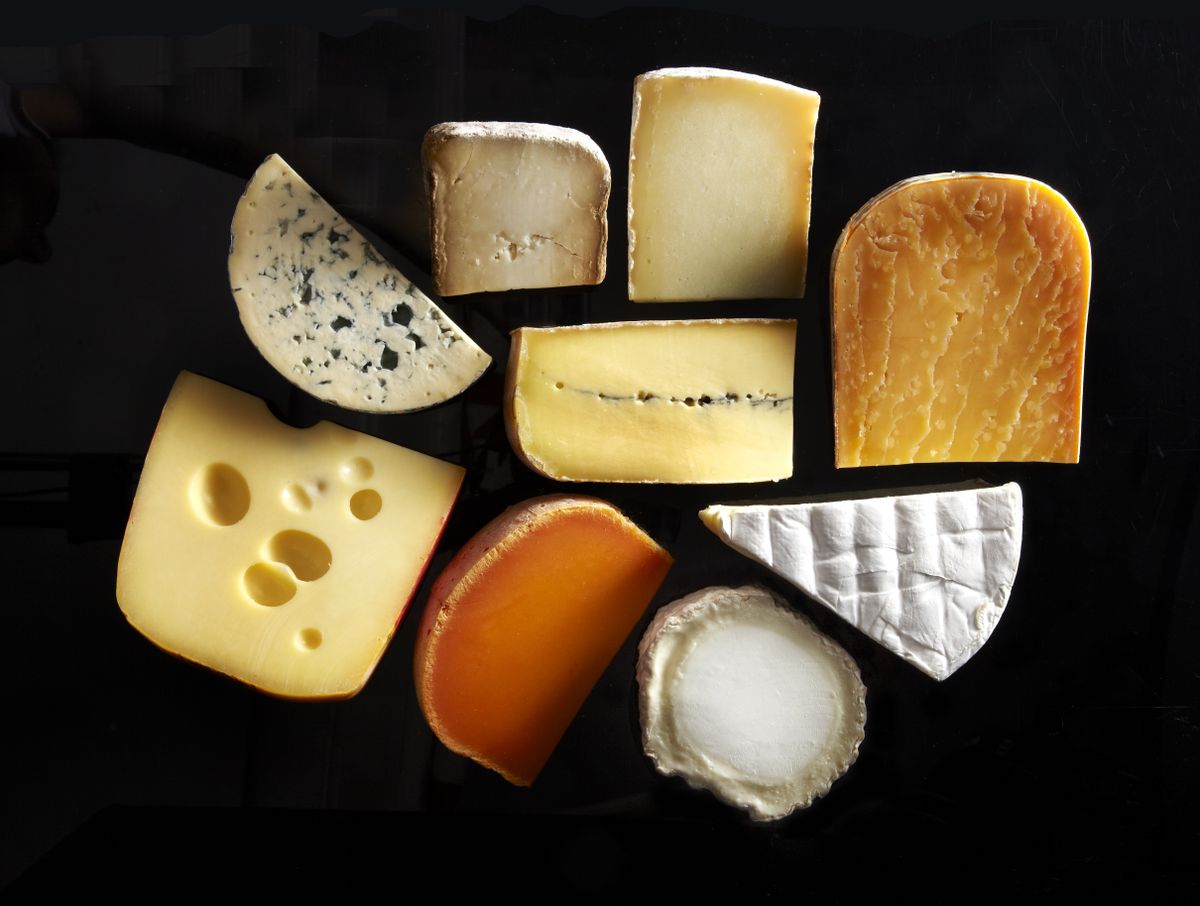 The threat of climate change loomed large above Vermont’s 2022 Cheese Summit. I was invited to the event to taste and learn about local cheeses, made by the state’s eclectic roster of producers—and I did so, gladly. But as the weekend wore on, it became increasingly clear that, despite the event’s hyper-local focus, Vermont’s cheese producers are tackling a far bigger question: What will cheesemaking look like in a warming world? According to them, dairy just might be the thing that saves us all.

Thanks to their methane-rich belches, cattle are the largest producers of agricultural greenhouse gasses on the planet. Almost half of the land in the United States is used for livestock, and overgrazing of these areas leads to poor soil quality and decreased biodiversity. Meanwhile, the dairy industry has consolidated, replacing smaller farms and producers with corporate mega-farms. As organizations like Milk With Dignity and projects like Milked: Immigrant Dairy Farmworkers in NY State have documented, these systemic changes combined with falling milk prices have led to increasingly poor, unsafe, and hazardous conditions for farmworkers—especially those facing undocumented status.

What if there’s a way to preserve cheesemaking and dairying practices, all while counteracting the issues caused by our current industrial agricultural system? In Vermont, the prospect felt like a real possibility.

Paul Kindstedt, professor of nutrition and food sciences at the University of Vermont, says that cheese has, for tens of thousands of years, been intertwined with changes in our climate. The start of the Halocene era 11,000 years ago marked “the beginning of an extraordinarily moist, warm, stable human-friendly epoch in climate history that unleashed the power of agriculture and the full potential of our species, for better or for worse,” he said.

However, even during this era of generally “benevolent” climate conditions, there have still been climate change events that threatened human populations. During these events, including a temperature drop in 4000 B.C.E. that impacted the Eurasian Steppe’s Neolithic communities and the flooding of Holland during the Medieval Warm Period, Kindstedt argues that “dairying and cheesemaking have repeatedly served as an irreplaceable fallback option for humanity to cope with climatic catastrophes.”

The reason that dairying has been “an option of last resort” for people during periods of climate uncertainty is actually quite simple. “Grass will grow almost anywhere under some of the most inhospitable conditions,” he said, and “ruminants [like cows and goats] are astonishingly adaptable.”

Ultimately, Kindstedt believes that a somewhat collaborative approach between small- and large-scale producers will be the most effective tactic for scaling up—and increasing access to—sustainable dairy products.

“What works for artisanal cheesemakers who are able to tap into high-end markets… may not necessarily work for larger-scale manufacturers that service broad sections of the public with more affordable products,” said Kindstedt, underscoring a key challenge in efforts to make sustainable products—across all sectors—available to the majority of Americans.

“Nevertheless, the experiences of small artisanal cheesemakers are providing valuable baseline data for the entire cheesemaking sector,” he added. “Much can be learned from the smaller end of the sector where cheesemaker creativity and adaptability can be field tested rapidly and presented to a public that is anxious to hear their stories.”

At the smaller cheese producers found in Vermont—like Shelburne Farms, the farm and educational center that hosted this year’s cheese summit—the quest for true sustainability is an ongoing process that dates back decades.

“I see dairy farming as a part of a holistic agricultural system,” said Helen Cowan, Shelburne Farms’ head cheesemaker. “With proper grazing, manure, and feed management…we can use cattle and other dairy animals to help improve soils and pasture ecosystems.”

“We haven’t tilled our soil since 1993 so all of our land, except the vegetable garden, is in permanent sod,” she explained. “This has resulted in much higher soil carbon values than found on surrounding farmland. We can also see higher carbon values in particular pastures that have been more intensely managed for grazing.” A high carbon value in soil is a good thing: It indicates that, rather than being released into the atmosphere as carbon dioxide, carbon is effectively getting stored in the soil itself. The goal of this process, known as carbon sequestration, guides much of the farm’s sustainability efforts.

“The goal for the farm is to become carbon neutral or negative by 2028,” added Tom Perry, Shelburne Farms’ cheese sales manager.

The farm has also embraced several “waste diversion” measures to make use of cheesemaking’s byproducts. Leftover whey from the cheesemaking process, for example, is implemented (along with manure) as pasture fertilizer, and an aerobic composting program, which collects stray curds and used paper towels, helps sequester carbon by creating rich, healthy soil.

Vermont Creamery, which produces cheese and dairy products from goats’ milk, is similarly interested in making use of traditional waste products from the cheesemaking process. “Where traditional cheesemaking practices are concerned, a truly sustainable system would place heavy emphasis on the issue of byproducts,” said Adeline Druart, Vermont Creamery’s president. “We’re actively turning our food waste into carbon negative renewable energy through our partnership with Vanguard Renewables and their Vermont-based biodigesters.”

But for all of their successes, Vermont’s dairy and cheese producers are the first to acknowledge the many challenges—and uncertainties—that lay ahead. For Shelburne Farms, “refrigerant use” and finding “more sustainable packaging solutions” are two of the most pressing concerns. Right now, they’re testing biodegradable wax to replace the cheese’s current paraffin wax coating. They’ve also swapped their insulated boxes for Greencell packages and plan on switching to biodegradable ice packs in the near future.

The undertaking is a slow one: On a tour of their facilities, Perry reminded me that Vermont’s reputation as a haven for pasture-raised dairy and sustainable farming is one earned from decades of dedication and work. But as the climate crisis grows ever-more urgent, so do consumers’ desire for solutions.

Moreover, given the enormous demand for cheese (in 2020 alone, the average American consumer ate 40.2 pounds of the stuff), it’s hard to imagine the commercial dairy industry embracing a regenerative, resilient approach with smaller yields. Instead, consumers have increasingly turned to dairy alternatives—which promise a lesser environmental impact—to get their cheese fix. Miyoko’s, which uses cashews as the basis of its plant-based cheese and dairy, notes that its “products generate up to 98 percent less [greenhouse gas] emissions than conventional dairy products.” Violife, another vegan cheese brand, claims its products produce a 50 percent smaller climate footprint compared to their dairy counterparts. While these numbers certainly mark an improvement from our current industrial dairy system, Kindstedt believes the hype is premature.

Specifically, he says that these products’ total environmental impacts, nutritional profiles, costs, and land usage will need to face extensive scientific evaluation to understand how they compare to real dairy and cheese products. Only then will we have a sense of whether these products may (or may not) provide a sustainable alternative to dairy in the long-term.

“Does anyone really think that profit-driven startup companies can become the savior of humanity by blowing away dairying and cheesemaking?” he asked.

I’m inclined to agree with Kindstedt: Our relationship with dairy has been too long, too intertwined, and too rich to give up on just yet. Ultimately, however, it’s up to consumers to decide what the cheese of the future might look like—whether that means embracing the model set by Vermont’s cheesemakers, or finding a solution elsewhere.

How to Keep Your Cats Off the Kitchen Counter, Once & For All

Our 76 Best Thanksgiving Side Dishes to Complete the Feast