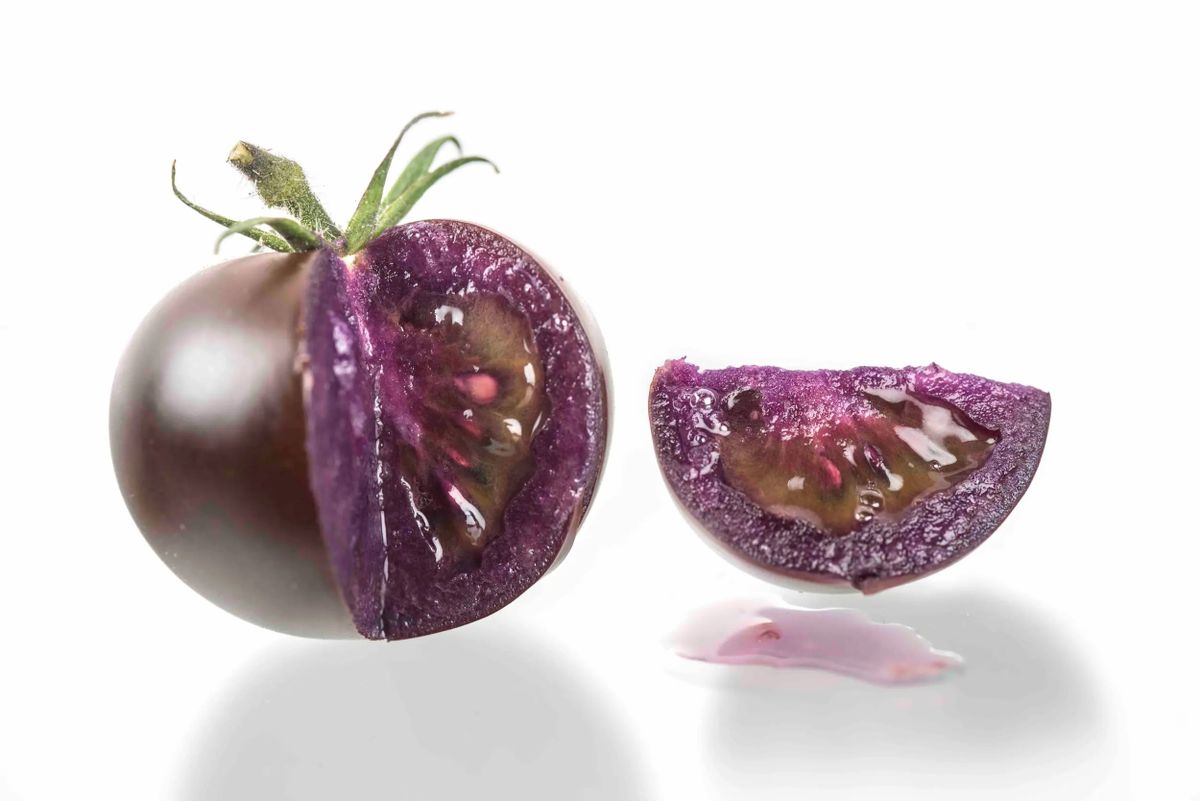 But thanks to a recent announcement by the US Department of Agriculture, that could very well change within the next year. In a press release shared earlier this month, the USDA’s Animal and Plant Health Inspection Service decreed that a genetically-modified purple tomato is “unlikely to pose an increased plant pest risk compared to other cultivated tomatoes,” and therefore “may be safely grown and used in breeding in the United States.”

This unique tomato isn’t the result of some renegade farmer trying way too hard to go viral. In fact, the attempt to bring a purple tomato to market is many years in the making. The unexpectedly purple plant is the brainchild of biochemist Cathie Martin, a professor at the University of East Anglia in Norwich, England who’s been experimenting with pigments in plants and produce for 20 years. Her team first published research documenting their efforts to coax tomatoes to generate more anthocyanin, the pigment that gives blueberries, blackberries, and eggplants their color, back in 2008.

Given that long-standing record of research, this feat of genetic modification isn’t just about changing the color of your Caprese Salad—it’s what’s on the inside that counts. The increase in anthocyanin has the potential to boost the antioxidant capacity of the purple tomato, which could, in turn, offer additional health benefits. That same 2008 study cites “stunning” results in cancer-susceptible lab mice, with those fed a diet with high-anthocyanin tomatoes exhibiting lifespan increases of about 30 percent.

Not only can purple tomatoes offer more beneficial antioxidants than their red, yellow, and green counterparts; they can also tough it out in the produce section a bit longer. That’s according to a 2013 study from Martin’s team, which observed that purple tomatoes have the potential to enjoy a “significantly extend[ed] shelf life,” possibly due to the fact that “the increased antioxidant capacity of purple fruit likely slows the process of overripening.”

The promise of those results has taken Martin’s efforts out of the laboratory and into the world of produce sales through the launch of Norfolk Plant Sciences. The company is now tasked with eventually bringing these purple tomatoes to market, assuming their produce is able to secure FDA approval marking it safe for sale and consumption.

While skepticism over genetically modified foods could be an obstacle, brand recall certainly won’t.

“[It] strikes a cord with people in this very basic way,” Nathan Pumplin, Norfolk Plant Sciences’ CEO, told CNN. “It takes no imagination to see that it’s different…it really allows people to make a choice.”

For now, the plan is to launch purple tomatoes in a small number of markets in 2023, where they’ll no doubt add some color to the produce section.