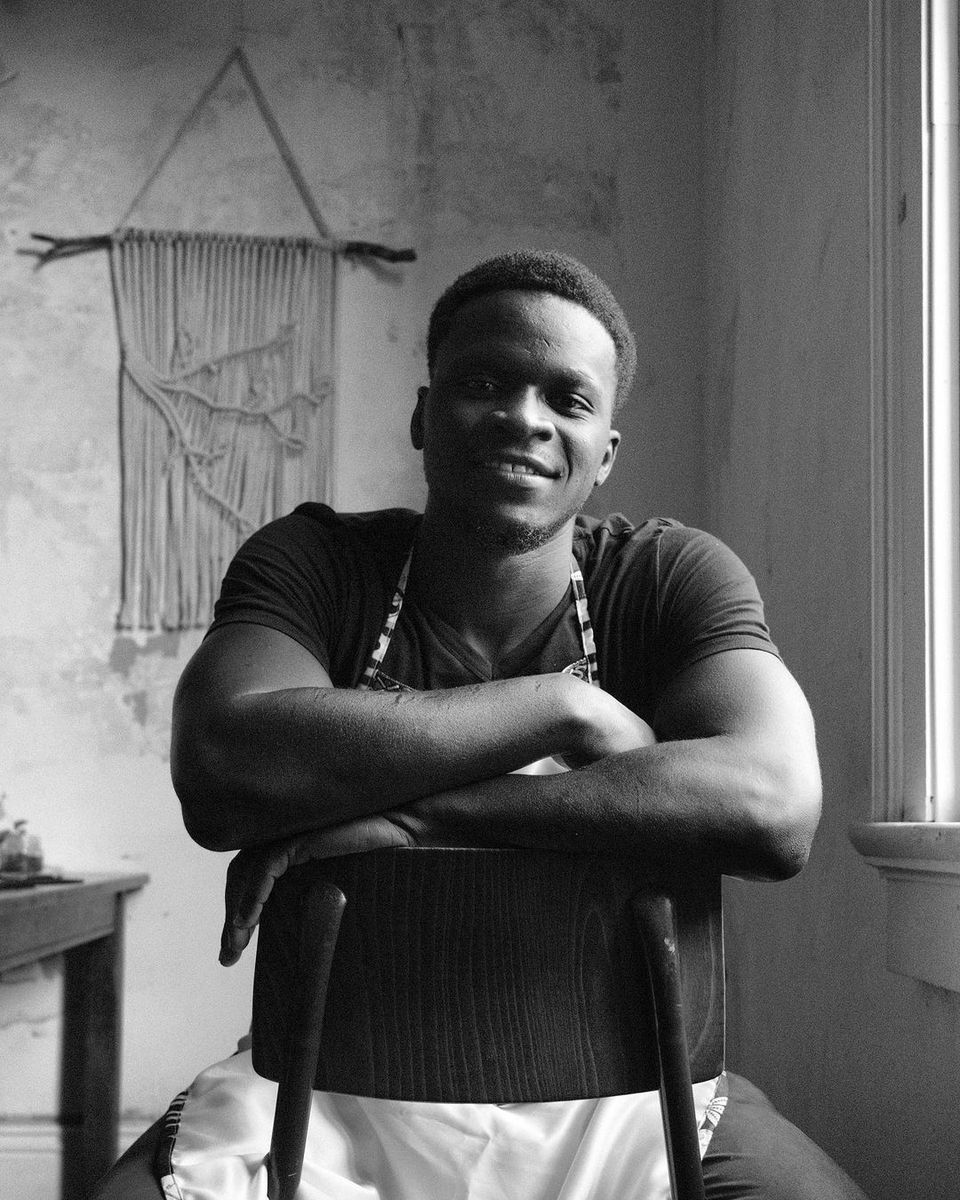 In a quaint, restored house in the New Orleans Uptown neighborhood, the scent of spices like clove, paprika, cayenne, and garlic wafts through the windows. Those walking by can, at once, catch a scent of briny, freshly caught blue crab and the piquant smell of scotch bonnet. The confluence of flavors isn’t accidental. It’s the creation of Serigne Mbaye, a young, Senegalese chef bringing his culinary vision to life.

For Mbaye, fusing flavors to create a West African-Creole fusion cuisine is a craft and an opportunity for Black chefs like him to explore the creative lanes they’ve long been kept from venturing. The child of Senegalese immigrants—including Khady Kante, a highly revered Senegalese chef in her own right (she operated Touba Taif, one of NYC’s only Senegalese restaurants, from 1989 to 1991, and ran a restaurant in her home country of Senegal)—Mbaye remembers preparing one pot dishes with his mom. Dishes like domoda—which Mbaye described as a gumbo—or maybe jollof with chicken, fish, or shrimp, and sometimes, a beef stew with peanut butter. The one-pot characteristic of the food in Mbaye’s upbringing would parallel with what he found in an area influenced by enslaved Africans who came from his homeland. Here, Mbaye said, was an opportunity to tell a new story.

“So much of our story has been told to us, and I think preparing food with our own, new narratives allows us to offer a new, more truthful story about where we’ve been and where we can go.”

Mbaye is intrigued by the historic dismissal of West African food within food media and the food establishment and is hopeful at what’s possible when chefs like him study the culinary lessons imparted from their Black American peers. Working in kitchens from Harlem to London, Mbaye’s background includes professional work with esteemed family members, such as his aunt Ndoumbe Kante, who taught Mbaye how to make Senegal’s national dish, thieboudienne, and of course, his mother.

“When my mom makes good food, she focuses on the food that she can get in that pot, not about what’s going on somewhere else,” Mbaye recalls of his mother’s cooking. “I’m learning from that by heading more towards more rustic food and focusing on telling the story. I think that people might consider food to be art, but I think it’s a craft.”

Mbaye’s journey toward refining his craft has been anything but linear: Born in the U.S., Mbaye went to Muslim boarding school in Senegal, where he immediately gained recognition for his culinary aptitude (at one point, Mbaye was cooking for hundreds of his teachers and classmates). The school was more focused on religious teachings, so when he returned to the U.S. as a teen, he had no English skills and no proper training in math, history, or science.

He quickly learned all subjects while working at Le Baobab, an iconic Senegalese restaurant in Harlem, under his aunt Ndoumbe, who was the restaurant’s longtime head chef. After a long bout with New York State testing, he graduated high school and went to culinary school. Mbaye’s career led him to meetings with fellow Senegalese chef Peter Thiam, back to Senegal to learn more about his foodways, and to work in places such as San Francisco, Barcelona, and of course, New Orleans.

“I was so inspired during these experiences because, here I am one moment learning something in a place that’s completely new, and now here I am going to the heart of the history of our ancestors. I think it set me up for what I was eventually going to do in New Orleans.”

At first glance, New Orleans may not appear to be the obvious setting for a thriving West African restaurant. New Orleans’ Cajun and Creole cuisine has become so representative of the area that many forget the indigenous, immigrant, and African roots behind the cuisine. Mbaye’s former boss, Melissa Martin, writes about this history in her award-winning supper book, Mosquito Supper Club.

“These settlers built communities alongside the American Indian tribes who had been inhabiting Louisisna since at least 700 BCE,” Martin writes of the Spanish and French settlers who’d colonized Louisiana. “Together, these groups—as well as people of Spanish, Basque, Croatia, German, Irish, Portuguese, African, Creolo, Cuban, and Pacific Island descent, among others, who also migrated to the area—lived along the bayous and waterways in semi-isolation for more than 175 years, sharing their respective skills and practices and intermarrying. Cajun folks and what we know as the Cajun way of life are the result of this intermingling of nations and peoples and the cultures and traditions they brought to South Louisiana and shared with their new neighbors.”

It’s at Mosquito Supper Club where Mbaye became a nationally-recognized name. Though the young chef came to the restaurant with his own talent and perspective, his role as chef de cuisine allowed him to learn more about managing a kitchen, and responding to the flavor profiles of a community. Mosquito Supper Club also allowed for experimentation: Mbaye kicked off her near quarterly pop-ups, Dakar Nola, which Mbaye sometimes hosted at the Mosquito Supper Club building. Wherever the pop ups are located, Mbaye remains committed to the communal dining method he learned at Mosquito Supper Club, and integrates the Cajun and Creole flavors he became exposed to into his Senegalese cooking.

“As I continue learning more about the connection between the two, I’m realizing the fact I need to tell this story about the between Senegal and New Orleans, because knowing these connections is how we understand more about our diaspora’s cuisine, and what we’ve been able to create under what were oftentimes oppressive conditions.”

Mbaye spent so much time studying New Orleans dining and refining his own Senegalese dishes, the fusion cuisine that emerged seemed almost inevitable. At one of Mbaye’s dinners, he started his meal with a creamy, earthy Black-eyed pea soup with locust bean, crab, and a drizzle of palm oil.

Called “The Last Meal,” Mbaye told guests a harrowing story: Enslaved Africans were forced to eat black-eyed peas ahead of their forced journeys across the Atlantic. Known as a legume that could fatten the body, slave owners force-fed the kidnapped Africans a food that had a rich, near-spiritual meaning in West African homes.

His dinner, Mbaye said, was an opportunity to reclaim black-eyed peas, treating them with the flavor of the Senegalese and Louisiana Black diaspora, and demonstrating the continued possibilities of Black food. For Mbaye, this is following the direction of one of his mentors, revered food historian Dr. Jessica B. Harris. “Dr. Jessica B. Harris told me that I just need to tell my story, and mine is one of possibility, so that’s what I’m doing.”

Mbaye is attempting to create something new in a place that takes food more seriously than most cities. But Mbaye sees no problem with using the fundamentals of Creole and Cajun cooking to construct his harmoniously seasoned grouper and vegetables; he is acutely aware of the similarities between jambalaya and jollof rice, and he sees no reason why a beignet can’t be infused with a fresh strawberry jam.

“Serigne is the son and nephew of two Senegalese women who made their mark on the New York food scene years ago,” wrote food and television writer Lolis Eric Elie in an email. “Like many children of immigrants before him, he’s taking the flavors and techniques of his ancestral homeland, combined them with the techniques and flavors of American restaurants and created an amazing new cuisine.”

New Orleanians seem to be intrigued by Mbaye’s flavor of fusion. Seats for a Dakar Nola dinner regularly sell out and Mbaye was just nominated for the prestigious James Beard Award. The young chef recently announced that he’s moving on from his role as Mosquito Supper Club’s chef de cuisine, and is planning to open a brick and mortar location of Dakar NOLA. Elie says it may be because Mbaye’s fusion cuisine manages to tell stories, both old and new.

“Americans know West African cuisine largely because of its echoes in Creole and Southern food,” wrote Elie. “So when people taste Serigne’s food, it’s at once new and familiar.” As the young chef finds new ways to pair West African millet and Gulf Coast seafood, it’s clear that, in Louisiana, there’s a place for Black food that is at once old, new, and wholly inspired.

“This is the time to reclaim our foodways and tell our stories,” said Mbaye. “I’m so grateful to be part of that sort of change in the dining world.”

What’s your favorite Senegalese dish? Let us know in the comments!

So, You’ve Built a Vegetable Garden—Here’s How to Take Care of It