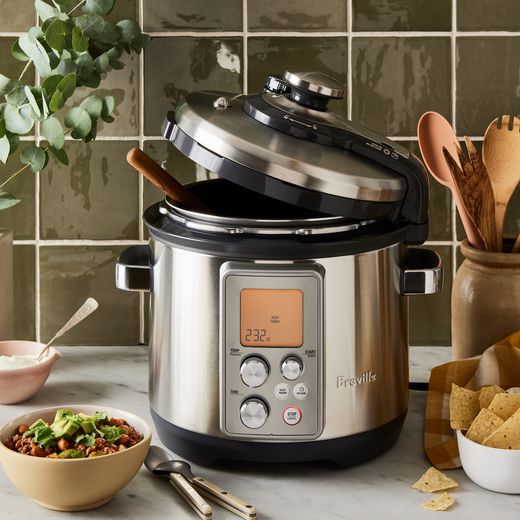 The OG pressure cooker has been a staple in home kitchens all over the world for hundreds of years—way before the buzzy Instant Pot came to the scene. The versions on the market today have more bells and whistles (and safety features) than the ones from the 1600s, but the cooking method is the same: using steam to cook food fast. If you’re new to pressure cookers and want to know how they actually work, what to make, and the best ones to buy, you’ve come to the right place.

How Does A Pressure Cooker Work?

As the name suggests, pressure cookers create a high-pressure environment in an enclosed space to cook food. “The increase in pressure is caused by holding the steam inside the vessel, which raises the boiling point of water, so the liquid inside doesn’t boil but gets very hot,” says Joshua Resnick, chef-instructor at the Institute of Culinary Education. “This shortens the cooking time of foods that take a long time to cook and leads to amazing flavor extraction, since no liquid evaporates from the pot.” The faster cook time also helps preserve the vitamin and mineral content of food.

Pressure cookers are ideal for braising meats like brisket and lamb shanks, since they’ll break down faster and flavor the braising liquid, which Resnick notes can be used to make rich, decadent sauces. “I’ve also used pressure cookers to make stock,” he says. “It yields less than what I would need for a professional kitchen, but for use at home, it makes the stock faster without compromising the product, so I don’t need to keep the stove going for four to 12 hours.”

What’s The Difference Between A Pressure Cooker And An Instant Pot?

Both a traditional pressure cooker and an Instant Pot can cook foods by creating a high-pressure environment, but the Instant Pot takes it a step further and also functions as a slow cooker, a rice cooker, and so much more. Beyond clever marketing, a big part of the Instant Pot’s appeal is that it takes a lot of the guesswork out of pressure cooking and makes it more approachable for the average home cook. It’s pressure cooking with just the push of a button. Think of an Instant Pot as an electric pressure cooker that plugs in (rather than sitting over the stovetop) and, depending on the model, has extra bells and whistles like different cooking functions and even smartphone and WiFi capabilities.

How Do You Use A Pressure Cooker?

Since steam is a crucial element to the pressure cooking process, you’ll need to add some kind of liquid (like water or stock) to the pot along with whatever you’re cooking. The amount of water will vary based on your pressure cooker and what you’re making, but using at least a cup or referring to the recipe is a good rule of thumb. Next, Resnick recommends checking the lid to ensure the seal is undamaged and intact before placing it on the pot and screwing it into place.

Next, place the pot over high heat on the stove until you start to see steam flowing through the valve. “Lower the heat until only a trickle of steam flows and you’re good to go,” Resnick says. If you’re using a digital pressure cooker like an Instant Pot, plug it in and set the pressure and cook time by pushing the appropriate buttons.

“Once the item has cooked for the necessary time, which is normally 50 to 70 percent less than if it was cooked in a traditional pot or Dutch oven, you need to release the steam,” Resnick says. One method of doing this safely is allowing the pot to cool down naturally over the stove. “The pressure will equalize through the valve since there is no heat producing more steam,” he said. “Once the cooker is at room temperature, it should be safe to open.” The second method involves placing the pot in the sink and running cold water over it until it reaches room temperature. This method will release the steam faster.

What Are The Best Pressure Cookers?

From classic models with simple designs to high-tech multitaskers, there are a variety of pressure cookers to choose from. We listed a few chef-recommended options below to get you started.

Kieron Hales, chef and managing partner of Zingerman’s Cornman Farms in Dexter, Michigan, has several pressure cookers in different sizes for various tasks, but this is the one that’s always on his counter at home. “It is practically perfect,” he says. “This is a pressure cooker for all and takes away the fear and concern people sometimes have about using one. It is super simple to use, clean, and store at this size.” Once you start using it, it might never leave your stove. Its 6-quart capacity is ideal for feeding a crowd or stocking your freezer, and the large side handles make it easy to lift and transport.

This multitasking marvel pressure cooks, air fries, sautés, steams, slow cooks, bakes, broils, makes yogurt, and keeps things warm with just the press of a button. Jason Goldstein, cookbook author, culinary television personality, and blogger behind Chop Happy, loves it because it means less equipment in the kitchen and more function. If you haven’t already hopped on the air fryer or Instant Pot train, this appliance gets you both in one.

Of the many pressure cookers she’s tried, LaMara Davidson, chef and founder of Cornbread and Kimchi, likes the ones by Zavor best because they are simple and classic. “Just tighten and lock the lid, choose the pressure setting, and that’s it,” she says. “The less intimidating, the better when it comes to a pressure cooker.” At 8.4 quarts, this stovetop pressure cooker has the largest capacity of the bunch and is backed by a 10-year warranty.

We’d be remiss not to include the Instant Pot in a guide to pressure cookers. The popular multicooker has captured the hearts of home cooks and professional chefs the world over, and it’s easy to see why. It pressure cooks, slow cooks, steams, sautés, keeps food warm, and makes rice and yogurt with just the push of a button. “The Instant Pot is faster and more efficient for making quite a lot of foods compared to some other traditional methods,” says Vasanti Bhadkamkar-Balan, food blogger, cooking instructor, and author of Authentic Indian Cooking with Your Instant Pot. “It can bake cakes, cheesecakes, or custards quicker than the oven, as there is no preheating required.”

Now that you’re (pretty much) a pressure cooker pro, it’s time to get into the kitchen with three classic recipes.

This bright, saffron-flavored risotto is quick and easy, plus it can be made year-round using fresh or frozen artichokes and peas. “There is no standing over a hot stove stirring slowly. Instead, almost everything goes in the pot upfront and, after a few minutes of checking e-mail or typing on the blog, the risotto is ready,” writes recipe developer [email protected].

The chicken equivalent to tonkotsu (a thick, opaque ramen broth made with pork bones), tori paitan is a more practical option for making at home since softened chicken bones can be broken down with an immersion blender. Recipe developer Mandy Lee notes that blending chicken bones releases a ton of flavor and allows you to make a super concentrated broth in just a few hours. A pressure cooker helps speed up the first part of the cooking process.

For St. Patrick’s Day and beyond, this recipe yields super tender brisket after just 55 minutes in the pressure cooker. This recipe comes from chef Hugh Acheson, who notes that you can swap out the cabbage with what’s in season: arugula, corn, and cherry tomatoes in the summer, and sautéed spinach and apples in the fall.

What do you cook in your pressure cooker? Let us know your fave recipes below!
This post contains products independently chosen (and loved) by our editors and writers. Food52 earns an affiliate commission on qualifying purchases of the products we link to.

Winemakers Are Aging Bottles Underwater. The Result Is Delicious.

A Brief History of the Dining Chair You’re Seeing Everywhere

31 Best Butternut Squash Recipes for All the Fall Feels