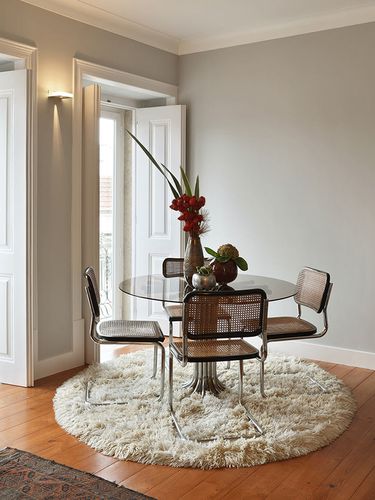 When my partner and I redesigned our kitchen a few years ago, we spent countless hours picking out a backsplash, choosing a new faucet, conceptualizing lighting designs, and combing through every single slab of marble out there to find one with the best veining.

One decision, however, was quick and painless: picking seating. It seemed like every stylish kitchen we admired (read: dominated our Instagram feeds) had featured these particular cantilever chairs, and just like the rest of the world, we were hooked. Admittedly, we didn’t know much about the design’s history, so I dug deeper into the backstory of what’s become one of the most popular dining chairs of the 2020s.

The story of the chair starts in Germany, at the famous Bauhaus design school. Miraculously, in just 14 years of operation, the Bauhaus produced a handful of interior design’s most enduring thought leaders. One such student was Marcel Breuer. The goal of his work, which aligned with the central teachings of his alma mater, was to marry form and function through common, accessible materials, and a dash of ingenuity. Arguably, his most famous creation is the balancing act of tubular steel and cane that sits in our kitchen and many others today: the B32 chair.

While its debut in 1928 caused a splash, not everyone welcomed the designer’s thoughtful creation. Four years prior, a prominent Bauhausian, Mart Stam had designed a tubular cantilever chair using gas pipes, though his lacked the caning that Breuer had employed. Angered, Stam and Breuer’s respective manufacturers fought for three years in German courts in hopes of snatching the European patent out of the other’s hands. In the end, Stam won.

Since its inception more than 90 years ago, the rights to producing Breuer’s version of the chair have changed hands from Thonet to Dino Gavina (who stripped it of its numerical moniker and re-dubbed it the Cesca chair after Breuer’s daughter Francesca) to Knoll, who revitalized the chair in honor of the Bauhaus’ 100th anniversary. The latest iterations include multiple heights, upholstery options, and colors.

With a surge in popularity comes a heightened chance of fizzling out, of eventually teetering more towards trendy than classical. The Cesca chair’s current popularity, however, shows no signs of slowing down. Its ability to be reinvented, its place in design history, and the ease at which it fits with any home’s style are sure to keep it a go-to for many years to come.

For the real deal, this set of Marcel Breuer-designed chairs from the ‘670s is in excellent shape. Chairish has all the details on the chairs they’re in since there’s no way to physically see them before adding to cart, and there won’t be any surprises when they arrive at your door.

As close to the OG without going vintage shopping, Knoll lets you customize the original Breuer chair design from upholstery to the color of the frame, and there are even bar and counter height options.

A bit more budget-friendly, this pair of cantilever chairs is perfect for those who don’t need a large set. You can also customize the frame and legs for a bit more personality.

This post was updated in June 2022 with more Cesca and cantilever chairs we love.
Have you seen this dining chair style around? Tell us in the comments below.
This post contains products independently chosen (and loved) by our editors and writers. Food52 earns an affiliate commission on qualifying purchases of the products we link to.