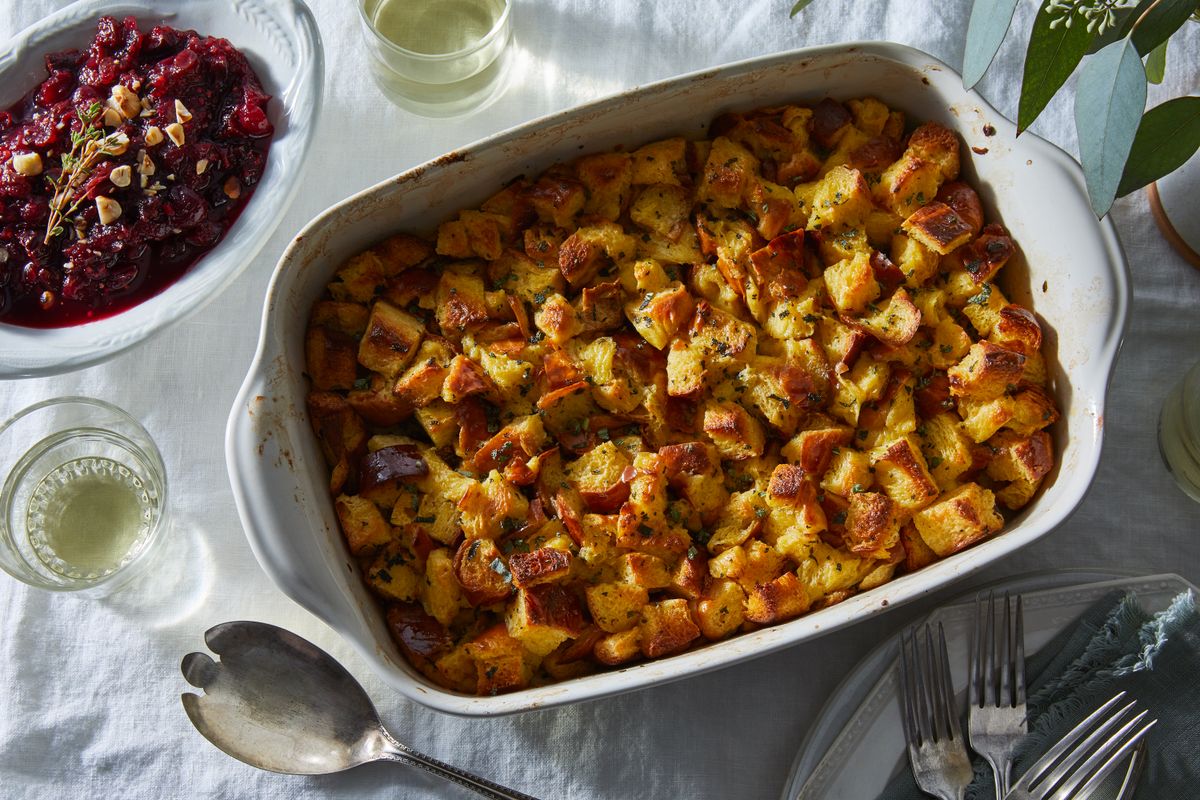 Most families serve stuffing (or dressing) for Thanksgiving, and those who do will insist that theirs is the best. That’s because there are an endless number of ways to make stuffing. First, the bread. Are you using sourdough, cornbread, country white, or a boxed mix (hey, no judgment here)? And then for the mix-ins: Are you adding sausage or keeping it vegetarian-friendly with mushrooms? We even took an unbiased approach to find the best Thanksgiving stuffing recipe–for the record, Absolute Best Test columnist Ella Quittner found that the best bread is cornbread for “a soft, plush texture beneath a crispy top crust.” As for the cooking method, go for a deep-dish bake followed by a quick broil for the best texture.

For the purists, there’s this timeless, unfussy Thanksgiving stuffing recipe. Treat it as building blocks for future turkey days–any old white bread will do (literally—the older, the better, as long as it doesn’t have mold). It’s dressed up with salted butter, onions and celery, fresh sage, and white pepper, which is more fragrant and less assertive than black pepper.

Some of the best Thanksgiving stuffing recipes run generations deep, including this one. The sage- and poultry seasoning-infused stuffing is extra creamy, thanks to the inclusion of a beaten egg and whole milk. It’s not quite as custardy as some stuffing recipes, but it’s enough to keep the bread from drying out on your dinner plate.

3. Cornbread Stuffing, but Make It Taco

We’ve already established that cornbread is the best bread for making stuffing, right? Right. From here, add ingredients that you’d use to make your go-to taco (yep, you read that correctly). For recipe developer Sohla El-Waylly, that means ground beef, quick-cooking vegetables, grated cheddar cheese, and an assortment of fiery seasonings like Ancho chile powder, smoked paprika, and cumin seeds.

The secret to this family-favorite stuffing recipe is cornbread. That is, pre-packaged cornbread stuffing. Dress it up with pan-fried sausage, nuts, dried cherries, lots of earthy spices, and mushrooms. Always mushrooms.

Here, you’re not just making Thanksgiving stuffing; you’re also making the sausage for the stuffing. It’s not necessarily the recipe to try your hand at if you’re hosting Thanksgiving and cooking everything single-handedly, but if you’re having (or attending!) a potluck-style Thanksgiving, this is the dish to show off with.

Challah bread is just as good to use for Thanksgiving stuffing as cornbread is. That’s because it naturally has a delicious, decadent flavor and buttery texture that brings natural moisture to the dish.

For non-traditionalists, there’s this Thanksgiving stuffing recipe made with turkey sausage rather than the usual pork. After all, it is Thanksgiving! An entire pound of kale makes a bold appearance, as do fresh dates and two super spicy chile peppers.

One easy way to amp up traditional Thanksgiving stuffing is by browning the better, aka heating it a little longer than you normally would until the milk quite literally browns and becomes nutty. The butter releases aromatic notes that pair super well with herbs like sage and rosemary.

Share your family’s go-to stuffing (or dressing!) recipe for Thanksgiving in the comments below.

How to Grill the Juiciest-Ever Chicken