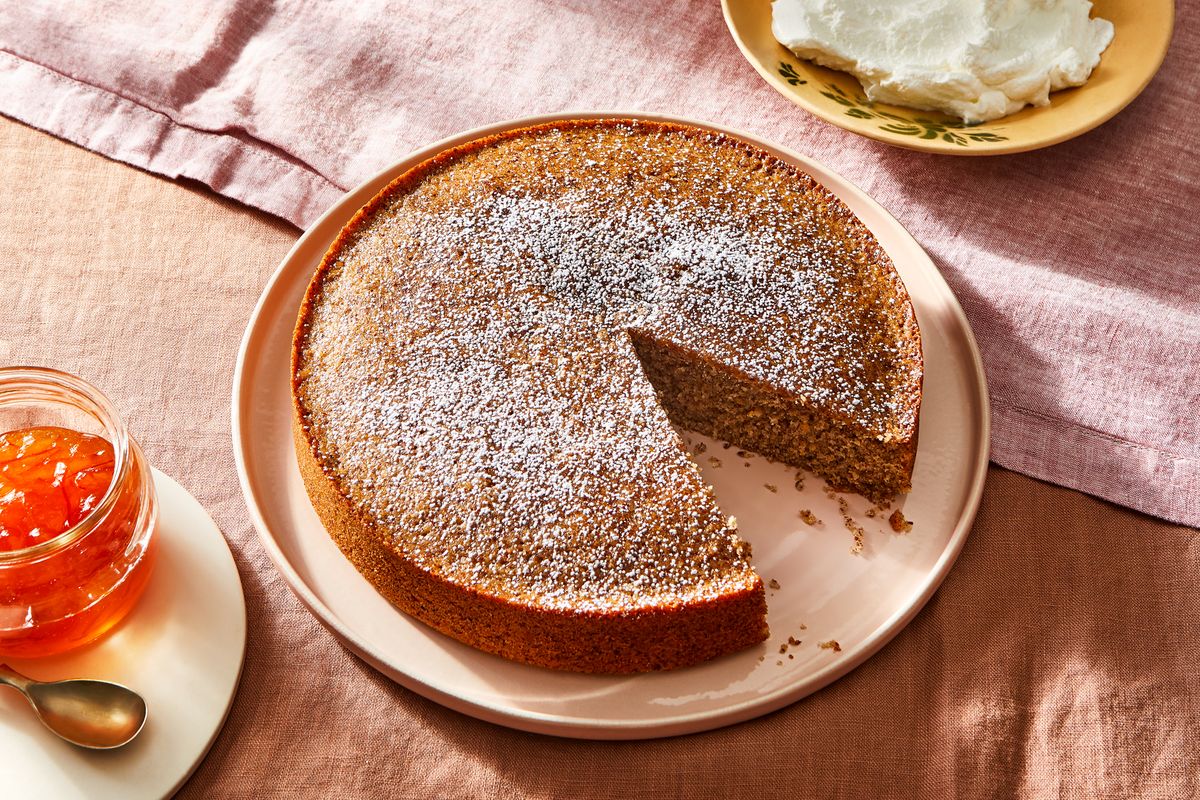 Golden syrup and clotted cream are everyday ingredients in the U.K., yet many Americans have never even heard of them. These British staples are crucial for classic desserts like treacle tarts and roly-poly pudding—you may only have seen while watching The Great British Baking Show.

Just a few essential ingredients comprise countless British bakes. Here are seven pantry staples that define British baking, plus where you can find them and how to use them.

Caster sugar is ground more finely than ordinary granulated sugar, which helps it to dissolve more easily, making it ideal for baking. While caster sugar is available in America—where you can more readily find it labeled “superfine sugar” or “baker’s sugar”—it tends to be somewhat more expensive than your go-to granulated sugar.

Using caster sugar or superfine sugar makes a big difference in cakes, like in this Pistachio Cake with Lemon and Rosewater, in which those quick-dissolving properties make easier work of creaming together butter and sugar. And slowly adding caster sugar while beating egg whites in Our Best Lemon Meringue helps keep the glorious layered treat from being gritty or grainy.

“Golden syrup is a light gold–colored syrup made from cane sugar.” says Thida Bevington, a home baker from Norfolk with an impressive Instagram following.” [It has] a texture like honey and a slight buttery taste.” Golden syrup is a form of invert sugar—sugar that has been processed so that the molecular bonds that form sucrose (glucose and fructose) are broken, reducing the size of the sugar crystals and resulting in a viscous, honey-like texture.

While golden syrup is often employed in baking, de Lacey recommends drizzling it anywhere you might normally use honey or maple syrup, “particularly inside and on top of sourdough waffles with lots of crème fraîche and a sprinkle of salt.”

Luckily, golden syrup is becoming easier and easier to find in the U.S., both in grocery stores and online. While there is no perfect substitute for golden syrup, once you have a can (or bottle), you can use it in any recipe that calls for corn syrup—and the results will only be tastier.

“Muscovado sugar—dark, bittersweet, and damp—can be overpowering if not used judiciously,” says British author and food writer Felicity Cloake, who nonetheless calls it “essential” in Christmas mincemeat pies and sticky toffee pudding. To mix up your breakfast or afternoon tea routine, “muscovado is also great in a darker, more brooding style of marmalade,” shifting the flavor profile from bright and citrusy to more warm and wintery version.

Though dark brown sugar makes a decent substitute for the muscovado you’ll spy in lots of British baked good recipes, you’ll miss out on that intense molasses flavor. Muscovado sugar remains tricky to find stateside, and is mostly available in specialty shops and online.

If you can get your hands on some muscovado sugar, try this holiday-worthy Winter Hazelnut & Orange Cake, which includes orange zest as a bright foil for the warm, deep flavor of muscovado.

Known in the states as “self-rising flour,” what Brits call “self-raising flour” has a rising agent—baking powder—added to it in advance, which makes whipping up a cake batter or batch of scones that much faster.

The biggest difference is that Brits use it all the time, whereas many Americans don’t even know it exists. Bevington uses it frequently in cakes and scones, and many British recipes call for self-raising (or self-rising) flour frequently.

Though it’s relatively easy to find here, if you don’t have any handy, Nigella Lawson has a handy guide on her site. Simply add 2 teaspoons of baking powder per cup of all-purpose flour, and your “bakes” should rise just fine.

Try these Never-Fail Biscuits, and you’ll quickly understand why Brits love the stuff.

Spelled gelatine in the U.K., gelatin sheets (sometimes called “leaf gelatin”) have a clear, plasticky appearance. In the U.S., the most prevalent form of gelatin–a protein derived from bones, cartilage and other animal connective tissue–is a powder that you can buy in packets or in bulk. You must “bloom” or activate it in cold water before dissolving it in hot liquid. Some people can detect a light, unpleasant smell in gelatin powder (which is generally undetectable in the final product).

Cloake tells me she has used both powdered gelatin and gelatin sheets, but finds the odorless sheets “much easier to use.” Sheet gelatin can be difficult to find in stores in the U.S. One can order it online, but it’s often expensive compared to the more prevalent powdered form. If using gelatin intimidates you, refer to this handy guide, which explains how to use both sheet and powdered gelatin.

Digestives are what the English call “biscuits” and what Americans might classify somewhere between a cracker and a cookie. They pair nicely with cheese, but make a perfect snack on their own, as well. You can buy dark or milk-chocolate versions (which make superior s’mores). Digestives also make a great substitute for a graham-cracker crust—what the Brits call a “biscuit base.” Cloake tells me the biscuit base often makes cameos in no-bake desserts like cheesecakes (try this recipe for No-Bake Nutella Cheesecake, and one of her personal favorites, banoffee pie. “Completely over the top, and utterly irresistible.” banoffee pie employs a buttery biscuit base filled with caramel and bananas and a coffee cream topping.

Digestives are finally getting easier to find in the U.S.; I sometimes see them at my local grocery store in Seattle, and can easily buy them online. Try subbing Digestives for graham crackers the next time you make a cookie crust. You won’t be disappointed.

“If you’ve never had the pleasure of cracking the freckled, yellow crust on top of a pot of clotted cream, then put it on your bucket list,” says Cloake. Somewhere between butter and whipped cream, clotted cream is a thick, rich, nearly stretchy form of cream ideal for spreading or dolloping. It’s made by slowly heating fresh cream until the butterfat separates and rises to the top.

Clotted cream is typically enjoyed atop a warm scone with a bit of jam or with a sticky dessert, like a classic English treacle tart. Cloake enjoys hers alongside summer berries and even adds a spoonful to her Cornish pasties, for “a touch of luxury.”

Unfortunately, clotted cream is almost impossible to find in the U.S., though specialty shops sometimes carry it for extortionate prices. You can make it yourself if you have 18 hours to spare and a few pints of high-quality cream.

Though some of these items can be hard to find on our side of the pond, once you get your hands on a tin of golden syrup, you may not be able to go back. Try your hand at a couple British recipes, because as Cloake, de Lacey, and Bevington all assured me, British recipes are often as simple as they are delicious.

“Almost anyone can knock up a batch of scones, or fairy cakes, or a decent Victoria sponge, or even a Christmas cake without too much effort,” Cloake said. “Which perhaps then gives them more confidence to go on and experiment with more complicated bakes.”

A Make-Ahead Menu for a Laid-Back Dinner Party