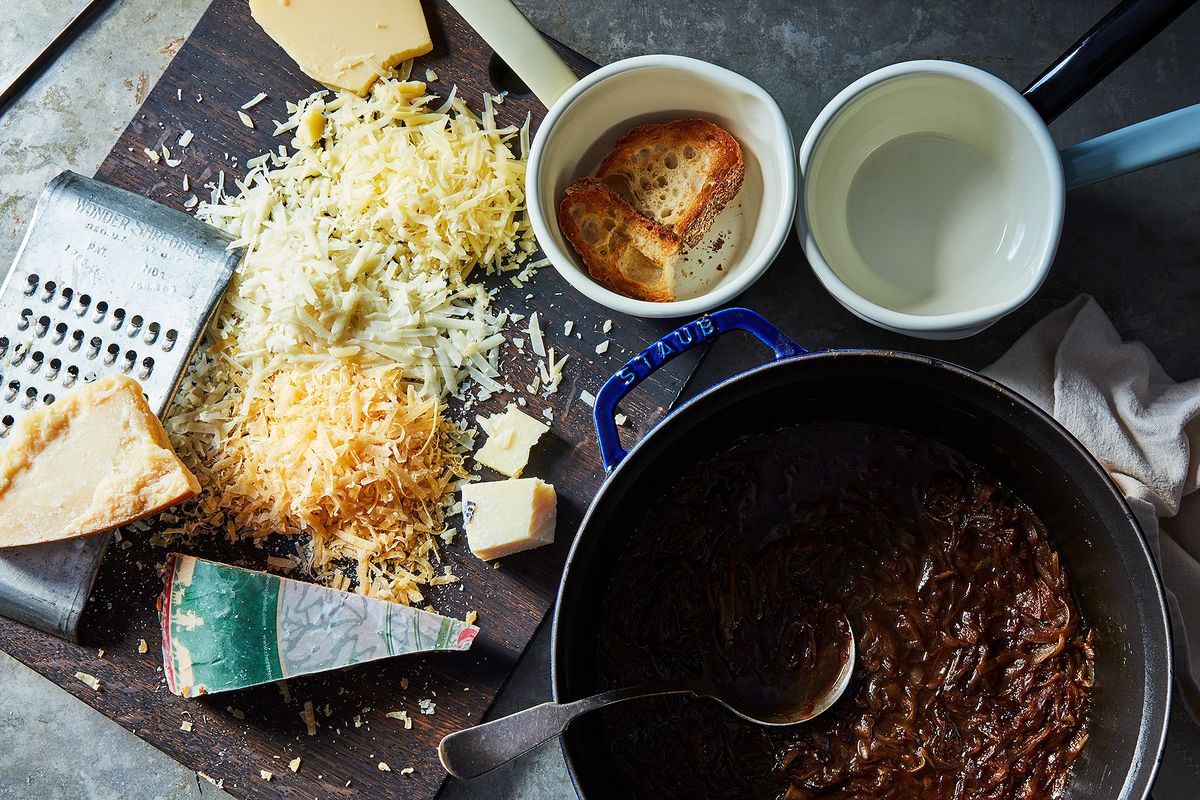 As is true of “French toast” and “French fries,” “French onion soup” is not known as such in France.

Referred to most often as soupe à l’oignon, this hearty dish is a staple at weddings, when it’s served at the end of the night—with the questionable goal of lining the stomach after all that Champagne. It’s also a frequent offering at the restaurants dotting the 1st arrondissement near the former food market of Les Halles (dubbed the “Belly of Paris” by nineteenth-century novelist Emile Zola).

At Au Père Tranquille or the 24-hour Au Pied de Cochon, you’ll find bubbling bowls of the stuff served at all hours—a holdover from when these brasseries catered to the forts des Halles. Following an early morning of hefting boxes and crates, these “strong men” of Les Halles needed something to sustain them for the rest of the day, and a soup of cheap caramelized onions, nourishing beef broth, and a bit of gooey melted cheese was just the ticket.

Chef Ed Delling-Willliams, an English expat who moved first to Paris, then to the Normandy countryside, intends to serve French onion soup to revelers in the early hours of New Year’s Day at his Coutances restaurant, The Presbytère.

“I wanted to do something for New Year’s Eve that really was quite traditional and typical of France, and that we can serve at around 1 in the morning,” he explains. “Nothing really fit until I landed on French onion soup.”

Want your home to feel like his Normandy pub? Keep these chefs’ six tips in mind as you pursue French onion soup perfection.

Golden-brown onions are the heart and soul of a good French onion soup. The type used varies from chef to chef. Some like sweet Vidalias, while others prefer classic yellow onions slowly caramelized until their natural sugars render them rich and succulent.

Either way, you’re going to need a lot of them—“way more than you think,” according to Delling-Williams.

If using large Vidalias, use four or five onions for six to eight people. If using smaller ones, go for a bit more than a half-pound per person.

Sounds like a tearful affair? Break out the onion goggles, and take advantage of a few other modern conveniences.

“You’ve got to cut up about 25 kilos [55 pounds] of onions to make a gallon of soup,” he says. “But if you’ve got a Robotcoupe, it’ll slice the onions in about a minute.” Just be sure to use the slicing disc, he warns. “Otherwise, you get mush.”

Most recipes call for cooking the onions low and slow in a heavy-bottomed pot greased with a mix of butter and olive oil, butter and duck fat, or all three. After far longer than you’d think of cooking them, stirring occasionally, the onions will finally take on a deeply caramelized, golden-brown color. While purists recommend seasoning them simply with just salt and pepper, others lean on the caramelization powers of a pinch of sugar to help them along.

Chef Delling-Williams also has a “trick” to ensure his onions develop an even richer, caramelized aroma.

“A lot of people like to sweat their onions down in a little bit of oil,” he says. “I put in an enormous amount of oil. Like a liter of oil. Like loads and loads of oil. And I kind of fry them in that.”

A one-to-one onion-to-oil ratio, he says, results in deep-fried onions with tons of color and flavor. All that oil doesn’t make it into the final soup, of course. Once you combine the mixture with the beef stock, Delling-Williams says, you can chill the entire soup down and skim any remaining fat off the top before reheating and serving.

Chef Thomas Graham of Le Mermoz in Paris’ 8th arrondissement also deviates a bit from tradition by adding a touch of flour right to the fat and onions. This de facto roux will help to slightly thicken the soup, giving it more body.

The most traditional cheese choice—hot off its win at the World Cheese Awards, naturally—is nutty Swiss Gruyère. It melts beautifully, resulting in loads of luscious cheese pull and heaps of flavor.

But you can, of course, toy with tradition. The team at Bichettes in Paris’ 10th arrondissement opt for Comté for similar flavor and a made-in-France appeal, and at Bouillon République in Paris’ 3rd arrondissement, they use Cantal, one of France’s oldest cheeses, with a texture and flavor profile more similar to cheddar.

Grate the cheese of your choice, and pile it atop a slice of stale baguette floating on the soup; the bread will form a barrier between the two, so that when you broil it (in an oven-proof bowl, bien sûr), the cheese can melt into the soup’s crowning glory.

Traditionalists agree that French onion soup has one base and one base only.

“It should be made with beef stock,” says chef Chris Edwards of Paris’s Le Saint-Sébastien. Indeed, beef broth is by far the most common base for French onion soup, lending a lusty richness and umami character that play oh-so-well with the sweet caramelized onions.

But there are other possible approaches. At Bichettes, the team makes a vegetarian version of the soup with house-made vegetable broth, a boon that does double-duty in helping the kitchen cut down on food waste.

“When we prep our vegetables for our beef pot au feu, we keep all the trimmings,” explains co-owner Agathe Fondeville. Those go into a pot with thyme, bay, and a few other odds and ends, and boom: veggie broth.

5. Be Willing To Deviate

“French onion soup is super-good, but it’s not always super-sexy,” Fondeville says, citing cooks’ penchant for placing a bit of bread in the bottom of each bowl.

“It’s kind of a pity,” she says. “The texture isn’t great.” So at Bichettes, chefs top their iteration with golden puff pastry rather than baguette, and add a double dose of Comté: some atop the pastry, and even more grated right into the soup.

At Le Mermoz across town, Graham pushes the soup even further out of its comfort zone, turning the onions into a purée and topping them with a cheese foam.

He and his team “changed pretty much everything about the recipe but retained the most important part—the flavor of caramelized onions.”

“Onions are my hands-down favorite vegetable,” he says. What better way to show them off?

Yes, you can make the bulk of this soup in advance, but a few touches do work better at the very last minute.

Edwards, for instance, recommends finishing the soup with white wine at the last minute–
“‘Raw,’ for lack of a better word.” This, he says, helps the wine retain its brightness.

It’s a smart approach if you’re hosting a crowd. Otherwise, “for someone at home,” he muses, “you’re just gonna make the soup and eat the soup.”

Wise words. Here are some of our favorite French onion soup recipes.

This traditional French onion soup begins with a full three pounds of onions, slowly caramelizing in a combo of butter and olive oil. Veal stock, thyme, and bay leaves create a rich stock that can be livened up with wine or beer. A four-cheese combo of gouda, Gruyère, Parmesan, and Pecorino add both nuttiness and funk to the finished bowl.

The best French onion soup, according to Nicholas Day, begins with chef Chad Robertson’s “brilliant” recipe in Tartine Bread. A mélange of duck fat and butter conveys richness to the onions, which you finish with chicken stock and heavy cream.

A vegetarian version of French onion soup employs vegan Worcestershire sauce to add depth to a base of caramelized onions, vermouth, and water. Asparagus spears lend a vegetal note; cheddar croutons a salty one.

The Dining Out Dilemma: Top 5 Tips for Eating Healthy When Dining Out