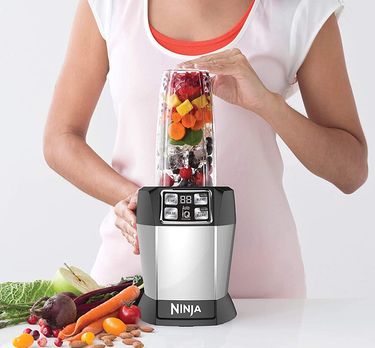 I have always loved having a personal blender around and have been whipping up morning smoothies a few times a week for nearly a decade. As I moved around in my early 20s, my handy-dandy Nutribullet provided a simple way to make a healthy breakfast or snack without being burdened by a large base and tons of attachments—a key factor when I was living in apartments with extremely minimal storage.

But beyond smoothies, making sauces, soups, and purées at home requires the right blender. Large, traditional blenders are powerful but can be cumbersome to store. Luckily, there are tons of low-profile personal blenders that offer more convenience and whose motors still pack a punch.

While I had a recommendation of my own in mind, I also caught up with some kitchen professionals to hear about what makes their favorite personal blenders stand out from the rest. We saw a wide range of answers from the blender cups you likely think of when you picture a personal blender to immersion blenders and countertop blenders that they still found easy to store. Regardless of which style you choose, there’s a recommendation that’s ready to help you out with blending tasks when needed and can be tucked away quickly and easily when you’re done.

A true personal blender in size, style, and simplicity, the Ninja personal blender packs all of the features you need into one small yet powerful 1,000-watt motor base and comes with one set of extractor blades as well as 18- and 24-ounce blender cups. For sipping on the go, they also include two spout lids that fit directly onto the cups. But going a step beyond popular one-setting models, the Ninja has both a pulse and a blend function that can be used manually or with their timed “Auto-IQ” settings. Recipe developer and creator of Midwest Foodie Kylie Lato recommends this personal blender because of how easy it is to use. “As someone who makes homemade dressing weekly, I rely on the ease and versatility of the Ninja personal countertop blender to help me make creamy dressing from scratch in just minutes,” she writes. “It also works great for smoothies, sauces, and pesto.” The blender is BPA-free, and its cups, lids, and blades are dishwasher-safe.

For the same 1,000-watt power and functionality of the smaller Ninja model with a bit more volume, chef and creator of Just Add Hot Sauce Alex Hill recommends this Ninja countertop blender whose 72-ounce pitcher is super versatile without taking up too much room. “For blenders to use at home, the Ninja blender is great!” she says. “It’s high powered and can make smoothies, marinades, dressings, etc., and it’s compact enough to keep in a cabinet to store away.” The set comes with the motor base, pitcher, and a lid with a convenient pour spout, which are BPA-free and dishwasher-safe. It’s also equipped with three power settings and a pulse button so you can purée, blend, and even crush ice at your preferred speed.

Looking for a personal blender that combines the efficiency of German-made carbon steel with incredibly pleasing aesthetics? Meet the Zwilling Enfinigy Personal Blender, available in a sleek matte silver or matte black finish. The small, sturdy base holds its 500-watt motor, and the included 19-ounce blending cup is made of shatterproof, BPA-free Tritan plastic. “I recently bought the ZWILLING Enfinigy Personal Blender, and I’m in love,” writes food writer and recipe developer Arlyn Osborne. “It’s minimal and sleek and pretty enough to keep on the counter…and I swear it makes the smoothest smoothies ever.” Osbourne may be right, considering the blender has a dedicated smoothie setting. That, along with an included to-go lid, makes the Zwilling a lovely pick for anyone who adores whipping up daily fruit concoctions. The blender also has a multifunction setting for chopping, pulsing, and any other blending tasks. and you can toggle between the two with a nifty LED-illuminated dial. The blender cup, blades, and lid are all dishwasher-safe.

“Some at-home blenders can be bulky and after a while, seem redundant to other tools and accessories. I’ve found the Bamix to be a fabulous heavy-duty, easy-to-store, and multifaceted option both for the café and at-home use,” writes Rohani Foulkes, chef and owner of Detroit’s Folk. This immersion blender is great for anyone who wants to go beyond the traditional functions of a personal blender to create soups and sauces right in their cookware, but with a collection of four attachments for blending, chopping, slicing, and aerating. “It’s definitely an upfront investment but well worth the quality, since it’s able to whip, slice, beat, foam, mince, and more.” writes Foulkes. The 15.5-inch blender has a 200-watt motor, two speeds, and a pulse button. Foulkes also advises storing the attachments mindfully since “they’re small, which is great for storage but easy to get lost in the bottom of your tool drawer.” Luckily this set comes with a wall mount that holds both the immersion blender and the attachments, solving this problem before it even begins.

Breville’s Super Q blender has the benefits of a personal and a full-size model with an 1,800-watt motor base that fits both a 68-ounce pitcher and a 24-ounce personal blender attachment. “This is one powerful and long-lasting blender and a serious piece of kitchen equipment,” writes the author of The Flavor Equation Nik Sharma, who has a current working relationship with Breville. “Not only does it do a fantastic job of making smooth and creamy nut butters and soups, it’s also fantastic for making dosa batters, cake batters that produce the spongiest cakes, emulsifications like mayonnaise, and sauces.” The blender automatically recognizes which pitcher is attached and optimizes its blending accordingly. It has five presets: two smoothie settings, a pulse and crush setting, a frozen dessert setting, and a cold-to-hot soup setting that allows you to craft homemade soups right in your blender pitcher. It also has 12 speeds and comes with both a tamper and a spatula so you can effectively scrape down the sides of the blender when needed. To clean the blender, just run the cleaning setting after filling it with water and soap.

The Nutribullet is perhaps the most well-known personal blender, and for good reason. It’s easy to use, effective, and stores away without hassle. I used the same Nutribullet for about eight years to great effect, and only parted with it due to a misplaced box in my most recent move. And ya know what? I miss it! Throwing a bunch of spinach, frozen fruit, and some OJ in its blender cup made for a super simple and delicious morning smoothie, and storing it away was never a problem in any of the apartments I lived in in my early 20s, no matter how little kitchen storage I had. The set comes with the 600-watt motor base, an extractor blade, a 24-ounce cup, a screw-on ring lid, and a to-go lid. The cup and lids are BPA-free and conveniently dishwashable, and the blades are super easy to rinse off in the sink after use. It only has one setting, which is activated by screwing on the blender cup and pushing down. While I made some sauces in my Nutribullet to mixed results, I mainly recommend it for smoothie and milkshake-lovers in search of a budget-friendly personal blender.

What’s your fave blender? Let us know below!
This post contains products independently chosen (and loved) by our editors and writers. Food52 earns an affiliate commission on qualifying purchases of the products we link to.

Memorize This Handy Trick to Get Red Wine Out of Clothes

The Best Charcoal Grills for Your Next Cookout