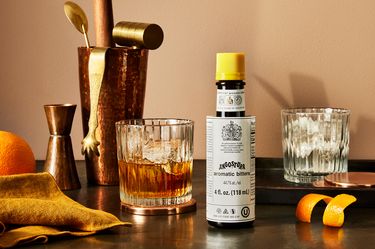 We’ve teamed up with ANGOSTURA® bitters to share the store of this centuries-old cocktail brand. From their nearly 200-year-old aromatic bitters recipe to two exciting flavors developed in recent years (we’re talkin’ cocoa and orange), ANGOSTURA® has inspired professional bartenders and cocktail enthusiasts alike since 1824.

There’s three things every host needs to delight their guests: good snacks, great drinks, and mind-blowing historical anecdotes. We’ve got plenty of recipes for the first part and ANGOSTURA® has the rest covered. Founded in 1824, ANGOSTURA® has been the bartender’s BFF and a host’s secret ingredient for nearly two centuries—and it all started with a stomach ache. Under the employment of South American political leader Simon Bolivar, German surgeon Dr. Johann Siegert joined forces with the Venezuelan military to develop ANGOSTURA® as an elixir to cure soldiers’ abdominal ailments. Several shakes (and stirs) later, ANGOSTURA® has been a vital part of some of the most iconic cocktails in American drinking culture.

In the early 19th century, Americans drank whiskey like it was water. Congress had just repealed the distilled spirits excise tax in 1802, giving way to a wave of whiskey and other distilled liquor production. It was common for consumers to order a bespoke drink of bitters, water, sugar, and a spirit of their choice, which was often whiskey. All combined, these ingredients make what contemporary bar-goers call an Old Fashioned. Over the next few decades, as foreign trade expanded and the nation grew, the public started sipping new combinations of imported liqueurs and spirits. By the 1880s, those simpler “old-fashioned” cocktails were back in vogue.

Level Up Your Labor Day Recipes With This Bar Cart Staple

Like most cocktails, no one can pinpoint the exact origin of the Old Fashioned, though late 19th-century media liked to attribute the drink’s Southern origins to The Pendennis Club, a gentleman-only establishment in Louisville, Kentucky. The drink ratified its status as a national favorite and its inseparable connection to ANGOSTURA® after a version of the recipe–made with a combination of whiskey, ANGOSTURA® aromatic bitters, water, and a sugar cube–was published in Modern American Drinks in 1895. Centuries later, drinkers of all ages continue to serve up classic Old Fashioneds at cocktail parties, fancy dinners, and holiday gatherings across the nation.

No offense to a certain fictional British spy, but we’re talkin’ gin when it comes to this classic Martini. Gin rose to prominence in American barrooms in the 1890s while imported vermouth (most commonly, sweet red from Italy and dry white from France) was also growing in popularity. At some point along the way, a final third ingredient—3 to 4 dashes of aromatic or orange bitters—rounded out this now-classic combination. Ironically, the simple mix routinely befuddled bar patrons who couldn’t agree on its name. Dueling 19th-century newspapers claimed that the Occidental Hotel in San Francisco first served the drink to patrons before they took the evening ferry to nearby Martinez, while another argued that the drink was invented in and named after the same town. Additional folklore and differences in pronunciation led to other possible spellings including Martinet and Martigny. Of course, there’s also a well-known brand of vermouth called Martini.

In addition to its evolving name, the drink’s ingredient ratio changed over time, too, with gin (and later vodka, much to Mr. Bond’s delight) taking center stage. In 2007, consumer’s long-lasting love of the classic cocktail inspired ANGOSTURA® to craft a citrusy twist on their signature aromatics in the form of orange bitters. This evolution inspires countless takes on the original ‘tini, adding in flavors ranging from zesty orange to herby Chartreuse to “dirty” olive juice, all making way for a cult-classic that created quite a buzz.

It’s hard to believe that no one thought to combine coffee and alcohol before the 1980s, but history seems to prove otherwise. In the late 19th century, bartenders made a so-called Coffee Cocktail with brandy, port, and an egg shaken together to look like a cup of joe with a layer of frothy cream on top, but that didn’t stick around for long. During Prohibition, newspapers raved about a different “Coffee Cocktail” enjoyed by ultra-modern travelers in train dining cars and hotels, but the drink was simply a double-strength demitasse coffee (a precursor to the espresso shot) meant to stimulate the appetite. Finally, in the late ’80s, as the most popular story goes, a British bartender made the now-renowned Espresso Martini by combining vodka, espresso, and coffee liqueur at the request of a bar patron.

In the 1990s, coffee consumption in the United States boomed with caffeinated chain cafes expanding across the nation. At the same time, vodka-based drinks were also on the rise, reviving old cocktails (like the Martini and the Cosmo) and inspiring new ones, too (hello, neon-green Appletinis). Halfway through 2021, a growing ’90s nostalgia spurred a resurgence of the sweet and creamy Espresso Martini via DIY recipes published on platforms like TikTok, to-go kits for mixing up the cocktail at home, and later in bars that welcomed pandemic-weary customers after a long year away. Always ahead of the cocktail curve, ANGOSTURA® cocoa bitters launched in 2020 featuring world-famous Trinitario cocoa, an homage to the brand’s island homes of Trinidad and Tobago, where cacao was first planted in the 16th century.

After two centuries and many, many dashes, ANGOSTURA® bitters are still a must-have for mixing iconic cocktails and the first item on our shopping lists when prepping for any upcoming hosting duties. Once everyone at your party has a drink in hand, break out these historical fun facts to complete the evening’s entertainment.

What’s your favorite drink that features ANGOSTURA® bitters? Tell us in the comments below!

Our friends at ANGOSTURA® have the aromatic bitters you need to shake up all sorts of cocktails, from a classic Old Fashioned to a trendy Espresso Martini. The Siegert family bottled the first of their bitters in 1824 and the tradition was passed down through the generations, evolving into the modern line of products that includes the original recipe, cocoa and orange bitters, and even an amaro.

Why Instant Pudding Is My Secret Weapon for Summer Desserts