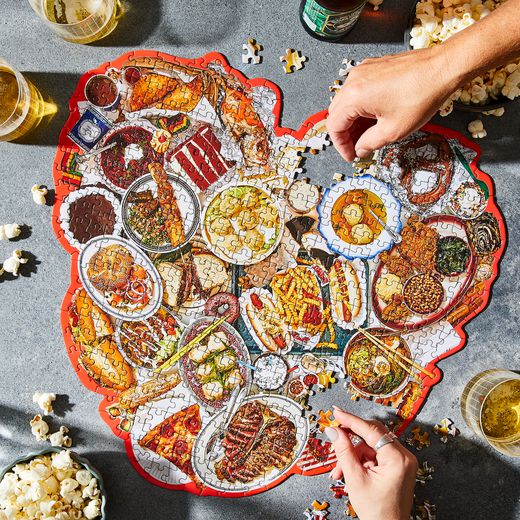 It was a big year for cookbooks, and in the last few months, we’ve seen an especially strong batch of publications. It’s no secret that cookbooks make great holiday gifts, but with so many titles to pick from, where does one start? I sifted through dozens of recently-published books, from quick cocktail guides to near-encyclopedic volumes on bread baking, to find the ones that will make a particularly great gift, whether it’s for a family member, coworker, or best friend. It’s a diverse, eclectic selection filled with unexpected flavors, striking photography, and—most importantly—joyous, celebratory cooking.

1. First Generation: Recipes From My Taiwanese-American Home by Frankie Gaw, $30.23

Frankie Gaw’s debut book, First Generation, is filled with the types of delightful recipes that made his blog, Little Fat Boy, a hit in the first place. He fuses Taiwanese techniques and flavors—taught to him by his grandmothers—with the best of his Midwestern upbringing, and the result is wholly original. Think: Lap Cheong Corn Dogs (inspired by the ones from Costco, which Gaw used to eat as an after-school snack), Cinnamon Toast Crunch Butter Mochi, and lots and lots of dumplings.

2. Savory Baking: Recipes for Breakfast, Dinner & Everything in Between by Erin Jeanne McDowell, $37.20

Food52’s Baking BFF Erin Jeanne McDowell is a prolific baker, known for her ability to guide us through the most daunting pastries—turns out, she’s an expert on the savory side of things, too (why are we not surprised?). While this book is the perfect gift for that person in your life who claims they’re “not really into sweets,” it also makes a great choice for any home baker looking to expand their repertoire. From staples like pita bread and corn muffins to unexpected new favorites, McDowell’s recipes are as celebratory and playful as her sweetest creations.

Rambutan might just be my favorite book of the year. Sri Lankan food is severely under-represented in U.S. food media, so it’s likely that this book will introduce its readers to new ingredients and techniques. All of its recipes, however, are highly cookable—like the intensely flavorful coconut dal with kale that comes together in under 40 minutes. Shanmugalingam also does a great job of contextualizing her family’s recipes within the island’s complex political history, bringing nuance to every single page and dish.

In his second book, Chicano Bakes, Esteban Castillo creates a world of technicolor sprinkles, glittering glassware, and holographic rainbows on each page. From variations on his iconic chocoflan (Red Velvet Chocoflan, anyone?) to classic renditions of Mexican sweets, this mostly dessert-focused book is simply a joy to behold. Give this book to your BFF who loves to bake (but only on the condition that they’ll make you Castillo’s Churro Cheesecake or Horchata Tiramisu as a thank you).

Homage tells the story of chef Chris Scott’s family over the course of generations, from his ancestors who were enslaved in the South to his great-grandfather who settled down in Pennsylvania. Not only do the recipes reflect these disparate geographic areas’ diverse culinary traditions (in what Scott calls “Amish Soul Food”), they are also wildly delicious, deeply comforting, and exactly what you want to eat when the weather turns cold. I, for one, will be making the Pennsylvania Dutch Tater Tot Casserole—complete with short ribs and cheese sauce—immediately.

Maybe we’re biased, but Kristen Miglore’s latest Genius cookbook really is, well, genius. The book features recipes from some of today’s most-iconic recipe developers—J. Kenji López-Alt, Samin Nosrat, and Dorie Greenspan, to name a few—making it a diverse collection you can turn to again and again. Miglore wrote this book with beginners in mind, and it shows—from the inclusion of diagrams and annotations to the way it’s organized, which categorizes recipes not just based on the meal, but also the effort needed to make them. Simply Genius’ thoughtful design will help ease beginners into the kitchen, and its low-impact, high-reward recipes (like sheet pan gnocchi and perfect chocolate chip cookie) will keep them there.

The new edition of Marcella Hazan’s seminal work, The Essentials of Classic Italian Cooking, is bound to become both a kitchen workhorse and family heirloom. Because it’s such a timeless volume, it makes an especially great gift for those going through big transitions—think of the recent college grad in your life, or the younger relative moving into their first apartment. It’s full of recipes that won’t feel too intimidating to the cooking-shy (like Hazan’s infamous Tomato Sauce With Onion & Butter), but has countless others that will appeal to those seeking out a long project. Either way, the result will be deeply satisfying.

The first cookbook from New York-based collective Ghetto Gastro defies categorization. You won’t just find recipes in this thoughtful book, but poetry, artwork, interviews, and essays, all of which explore the politics of food within Black communities. Many of the recipes are also plant-based (think: vegan chopped cheese or Jamaican jerk-style mushrooms), making it a great option for meat-eaters and vegetarians alike.

9. The Perfect Loaf: The Craft and Science of Sourdough Breads, Sweets & More by Maurizio Leo, $37.20

When I first looked through former Food52 Resident Maurizio Leo’s debut book, The Perfect Loaf, I couldn’t believe how comprehensive it was. Reminiscent of a textbook (in the best way possible), this book breaks down every single step and variable involved in baking naturally leavened bread. With entire chapters dedicated to “Your First Sourdough Loaf” and “Sourdough Science 101,” I can’t imagine a more thorough guide to the sourdough making process. Once you’ve nailed it, use your starter to make any number of other breads and treats, from sourdough pizza dough to naturally leavened brioche.

The Vegan Chinese Kitchen draws on China’s long tradition of vegetarian and vegan cooking—a history that often gets overlooked in Western food media—and combines them with author Hannah Che’s own experiences. The book is organized by ingredient category and features chapters on everything from leafy greens to mushrooms. I was especially intrigued by the lengthy sections covering tofu, tofu skin, and gluten (or seitan), all of which have been used as meat replacements in Chinese cooking for hundreds of years. I can’t wait to make the Vegetarian Fish in Sweet & Sour Sauce, which features an ingenious crispy “fish” skin made from nori sheets and tofu skin.

Claire Saffitz’s second book, What’s for Dessert, is an instant classic. With an emphasis on streamlined, simplified recipes (read more about that in our interview with her!), these desserts are playful and celebratory, but never fussy. Saffitz’s thorough approach, which eases any and all baking-related anxiety, really shines here, making it the ideal gift for the nervous baker in your life. I’m especially drawn to the countless recipes in this book that come together without the use of an oven—whether they’re stovetop desserts (see her recipe for Sweet Cheese Blintzes With Lemony Apricot Compote) or ones that get chilled and frozen, like her Tiramisu-y Icebox Cake.

12. Parsi: From Persia to Bombay: Recipes & Tales from the Ancient Culture by Farokh Talati, $32.55

Originally from present-day Iran, Parsis are Zoastrians who fled to India to escape religious persecution in the 7th and 8th centuries. Their cuisine reflects their histories in each of these places, combining the dried fruit and saffron found in Persian food with India’s curries and abundant spices. You’ll find easy, quick riffs on these flavors along with intensive, showstopping mains in London-based chef Farokh Talati’s debut book, Parsi: From Persia to Bombay: Try the Savory Masala Oats for the ultimate nourishing breakfast, then dig into Parsi-style curries, roasted and braised meats, and aromatic rice dishes.

The River Cafe Look Book is the type of book I wish I had in middle school, when I was just starting to get into cooking. The first half is filled with images of the book’s recipes, each of which is paired with a complementary photograph. Spaghetti alla Vongole, for example, is depicted side-by-side with a photo of drooping tulips, while the Risotto With Tomato and Basil sits next to a surprisingly striking image of packing peanuts spilling out of a cardboard box. The combinations are unexpected, playful, and breathe new life into the classic roster of dishes. The second half of the book, meanwhile, is dedicated to the recipes themselves—from smashed potatoes and green beans to a pear-almond tart—which are simple and ideal for a younger audience.

Okay, hear me out with this one. Noma 2.0—from the renowned Copenhagen restaurant of the same name—is not the type of cookbook you’ll likely be cooking from. It is, however, an absolutely gorgeous volume, featuring stunning photography and nearly-scientific breakdowns of each dish’s many components. It’s a natural choice for anyone who loves the world of restaurant dining, design, and a seasonal approach to food. The book itself contains a relatively small number of recipes, highlighting essential components featured in many of Noma’s dishes—such as shoyus, broths, and vinegars. However, ambitious (and digitally savvy) home cooks can scan a QR code to access full instructions for every single recipe in the book, allowing them to recreate at least some of the Noma experience in their own home.

What cookbooks are you gifting this year?
This post contains products independently chosen (and loved) by our editors and writers. Food52 earns an affiliate commission on qualifying purchases of the products we link to.

The Best Insulated Water Bottles To Keep Us From Melting